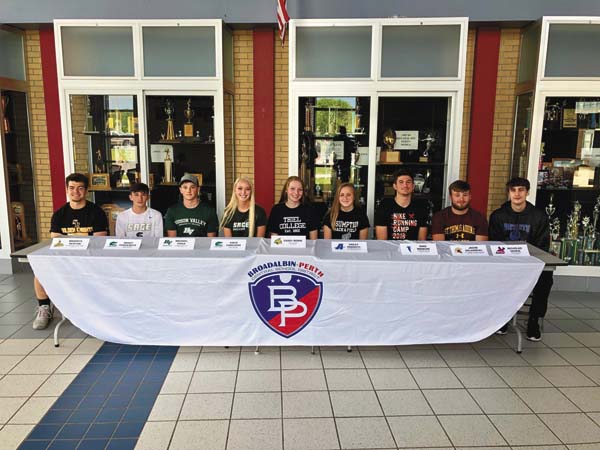 BROADALBIN — Nine Broadalbin-Perth Patriots will be playing collegiate sports this fall. Athletics Director Matthew Ehrenreich recognized each student-athlete for their accomplishments on and off the field.

“This is the first year every B-P varsity team has been a scholar-athlete team,” Ehrenreich said in a news release. “This group truly defines the term ‘student-athlete.’ I am confident they will follow suit as members of the NCAA. It is quite an achievement to play any level of collegiate sports.”

Each one of B-P’s 16 varsity teams maintained at GPA of 90 or higher.

Bown played four years of varsity volleyball and served as team captain. She also participated in one year of track and field. On the court, she was named MVP of the Patriots volleyball team as a senior and most improved player as a junior. Bown was named to the all-state second team and all-conference first team for volleyball, the MVP of the Fall Finale and KSA Team, and received the New York State Championship Sportsman Award. Bown has also served as class co-secretary and co-president of Spanish Club. Ranked ninth in the Class of 2019 Top Ten, she has been part of the National Honor Society, Key Club, Ski Club, SADD, Scientific Research Club, chorus and track and field. Her awards include the BPHS Principal’s List and the RIT Computing Medal. She served on B-P’s prom committee and was named to the homecoming court. Outside of school, Bown volunteers as a candy striper at Nathan Littauer Hospital, with the Just Run program, for the annual Great Sacandaga Triathlon, and as an assistant volleyball coach. She is team captain of the Sacandaga Volleyball Club.

During her athletic career at B-P Corcuera played three years of varsity soccer and served as a team captain. She earned Section II second-team all-star honors for her time on the pitch. She also played three years of varsity basketball. Her athletic achievements also include the Coach’s Award for soccer. This honor roll student donates her time to the community by helping run BYC soccer and basketball clinics.

Geren is a three-sport varsity athlete. He played football, basketball and baseball all four years while at B-P. He was named to the 2017-18 all-area football team. He qualified for B-P’s honor roll.

Parrotti was a two-sport athlete while at B-P, playing soccer and running both indoor and outdoor track. She served as the indoor track and field team captain and holds seven different B-P indoor track records (800m relay, 4X55 high hurdles relay, triple jump, long jump, 200m, 55m and 45m). Parrotti was named a first-team Foothills All-Star in long jump and triple jump and a second-team Foothills All-Star in 55. She is a Section II Division 3 champion for indoor long jump. Parrotti holds three school records for the outdoor season (100, long jump and triple jump), where she also served as team captain. She was named a second-team Foothills all-star in outdoor triple jump. Away from the field, Parrotti made the Principal’s List all four years and was a member of National Honor Society.

In addition to golf, Piska was also a member of B-P’s varsity bowling team. As a member of the golf team he earned Rookie of the Year (2015) and the Coach’s Award (2017). He secured four top three finished in the Section II sectional tournament.