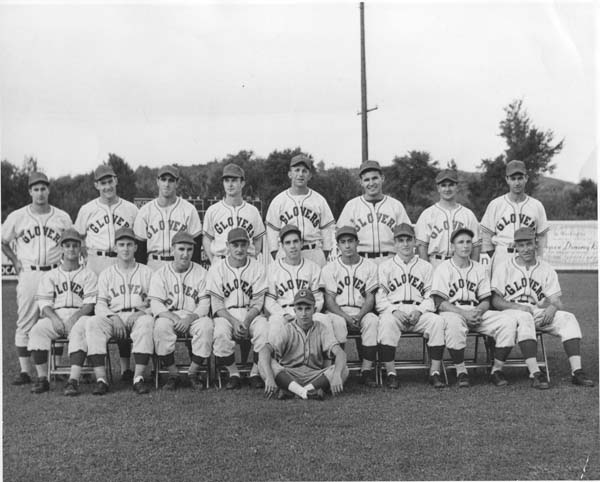 Charlie Fredericks of Johnstown, sitting third from right, was a member of the 1948 Gloversville-Johnstown Glovers. (Photo contributed by Fulton County Baseball & Sports Hall of Fame)

From 1937 through 1951, the baseball fans of Fulton County were treated to professional baseball via the Class C Canadian-American League Gloversville-Johnstown Glovers. Their games took place at Berkshire Park (later to be called Glovers Park), which is the area now comprised of Runnings Outdoor Store, Hannaford Grocery Store and the House of Pizza Restaurant that make up the corner of Route 30A and Fifth Avenue in Gloversville.

The Glovers were initially a minor league affiliate of the Brooklyn Dodgers in 1939, and from 1942-49 held an affiliation with the St. Louis Browns Major League Club of the American League.

Through their affiliation with the St. Louis Browns, the 1948 season was one that was extra special to the fans of Gloversville and Johnstown, as they got to root for a few hometown boys as well as be treated to a visit from a Major League team.

The Glovers hometown connection began early in the season when they signed 1942 Johnstown High School graduate Charlie Fredericks to pitch for them. Fredericks, a 5-11 southpaw, was a standout first baseman for Professor Wright’s successful Johnstown teams of the early 1940s. Because of his strong throwing arm, he was converted into a pitcher while in high school. After high school, he attended Parks College of Engineering, Aviation and Technology in St. Louis Missouri where he continued to play at the college level. And during the summers, he was a star pitcher in the Bi-County semi-professional league, pitching for local coaching legend Hank Cerrone on the Rhinehart A.C.’s of Johnstown.

According to Fredericks’ wife, Mary Jane, “whenever he was home from college, Uncle Hank [Cerrone] would recruit Charlie to pitch for him.” 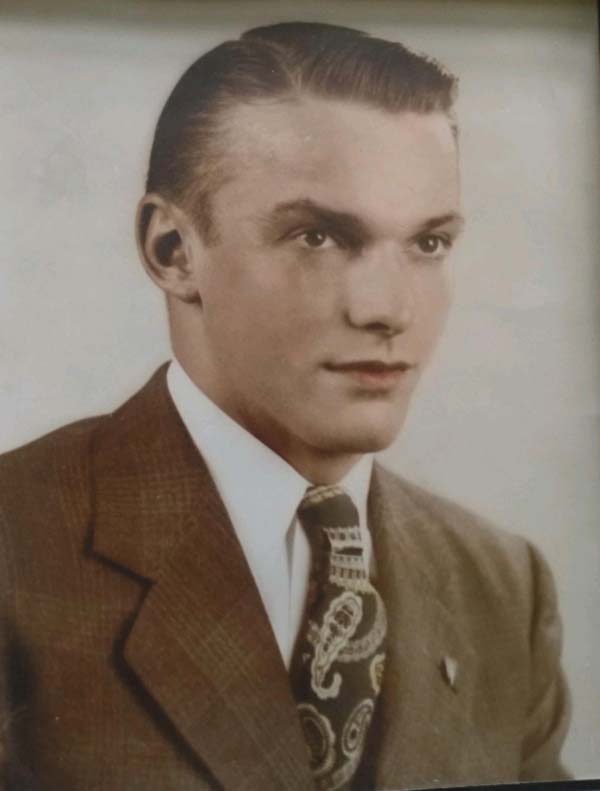 It was during his summers pitching for Cerrone that he started to catch the attention of major league teams and local games would often have scouts from the New York Giants and Brooklyn Dodgers in the stands on nights he pitched. Instead of signing to play professionally, Fredericks opted to voluntarily enlist in the Navy on Sept. 5, 1944 to serve his country in WWII. The afternoon before he left for basic training, he pitched for the A.C.’s against the St. Johnsville Nine and cruised to an easy complete game victory at Briggs Field in Johnstown. In his final at bat of the game, the contest was stopped, and to show their appreciation for his contributions to the team, he was given a purse of money that was taken up by teammates and fans as a thank you for his playing prowess and his upcoming military service. He then preceded to lay down a perfect bunt that he beat out for a single as the crowd cheered wildly.

One day later, he would officially enlist at the U.S. Naval Reserve Base in Springfield Missouri. He was eventually deployed to Naval Station Pearl Harbor in Hawaii as an Aviation Technician utilizing his education in Aeronautical Engineering.

Upon being honorably discharged from the Navy in 1946, he returned to Johnstown and once again suited up to pitch for Hank Cerrone teams for the summer. In addition to the Dodgers and Giants resuming their quest to sign him, the St. Louis Browns began to take notice of his pitching prowess.

After a June 1947 game against Dolgeville at Hilltop Park in Dolgeville, in which he pitched a complete game 1 hitter, striking out 14 and going 2-2 at the plate, the St. Louis Browns offered him a contract to pitch professionally.

According to Mary Jane, “Charlie always loved the Giants and had dreamed of one day playing for them. But, the Brown’s beat both the Giants and the Dodgers to him.”

He signed with the Browns and was sent to their Class C Central Association League team in Hannibal, Missouri. With the Hannibal Pilots, Fredericks compiled a 7-4 record and was a teammate of a 20-year old rookie by the name of Roy Sievers. Two seasons later, Sievers would make his Major League debut with the St. Louis Browns and win the American League Rookie of the Year for 1949. Sievers also would become a 5-time Major League Baseball All-Star, in a career that spanned from 1949 through 1965.

After starting the 1947 campaign back with Hannibal club, the St. Louis Browns organization transferred Fredericks to the “pitching starved” Gloversville-Johnstown Glovers for the 1948 season. This suited Fredericks very well, as he got to pitch in front of his hometown friends and family, as well as spend time with his future wife Mary Jane Peris of Johnstown. Many of you probably remember her as Madame Fredericks, who was a French Teacher at Gloversville High School from 1967 to 1988. This marked just the second time that an area boy would suit up for the Glovers since 1940 Johnstown High School graduate Eddie Zilka played for them in 1942.

Area fans got another thrill that season when the Glovers Major League parent club St. Louis Brown’s came to Glovers Park to play them in an exhibition game on Tuesday July 13th. The Major League club participated in the 7th Annual Hall of Fame Game at Doubleday Field in Cooperstown the day before against the Philadelphia Phillies. After beating the Phillies by a score of 7-5, the team spent the night in Cooperstown and then traveled north to Fulton County the next day for an evening game in Gloversville. A pre-game reception for both teams and the media took place at the Pine Brook Golf Course on South Main Street in Gloversville. Each player received a pair of Gloversville made leather gloves from team president Bob Rothschild. The parent club of big leaguers beat the local team by a score of 24-11, and pounded out 26 hits, with five of them being home runs. Second baseman Andy Anderson hit three, and center fielder Pete Layden hit two.

The 3,600 fans in attendance received another treat that day when 18-year old Gloversville resident Loren Stewart was put into the game to pitch in the fifth inning. Stewart, who had just graduated from Gloversville High School three weeks earlier, had recently signed a professional contact with the St. Louis Browns.

While he was not scheduled to report to play for the organization until the following spring, since the team was in his backyard, he was assigned to the Glovers for the day. The first pitch he threw as a professional player would be to a Major Leaguer (Pete Layden).

As the 3,600 fans in the stands gave the local pitcher a standing ovation, Layden proceeded to deposit his very first offering over the left field fence for a home run. Stewart quickly settled down and ended up pitching three innings during the game. While he had not expected to start his career until the following spring, his performance that day earned him a spot as a starting pitcher on the Browns’ “Stars of Tomorrow” squad, which was a touring group of the organization’s top prospects who played charity fund raising games against all-star amateur teams across the country. He would eventually return to pitch full time for the Glovers for the 1950 and 1951 seasons.

Fredericks did not pitch in the exhibition game as the Glovers were in the hunt for the 1948 Canadian-American League Championship and they purposely “saved” him for games just before and just after that contest, which would help them in the standings.

The 1948 season also brought local baseball fans the opportunity to see future Major League Player/Manager and Hall of Famer Tommy Lasorda. The 20-year old Lasorda spent part of the season as a pitcher for Lee Riley’s (Basketball Hall of Famer Pat Riley’s father) Schenectady Blue Jays and first became famous for setting the then professional baseball record by striking out 25 batters in a 15-inning game against the Amsterdam Rugmakers. During the first half of a July 24th doubleheader between the Glovers and the Blue Jays at McNearney Stadium in Schenectady, both Fredericks and Lasorda were used as relief pitchers in the game. Lasorda also batted and hit the centerfield wall for a double, but it was not until later in that inning that Fredericks was brought in to relieve. They always seemed to be starting pitchers on opposite ends of doubleheaders or in games as relievers and never faced one another.

Transferring Fredericks to Gloversville would prove to be a wise decision by the Browns organization, as he was a great ticket draw and compiled a season record of 10-8. As a fan favorite, he often times earned a pair of “Gloversville made Gloves” whenever he had a good outing on the mound.

While he was offered a contract by the Browns to return for the 1949 season, Fredericks chose to retire from professional baseball so he could put his degree in aeronautical engineering to use and began working for General Electric in Schenectady.

On July 9, 1949, he married Mary Jane Peris, and they started a family in 1951 that would include four daughters; Lynn, Terry, Jan and Marcia. Many of you know his youngest daughter as Marcia Gillis, who has been a social studies teacher at the Gloversville Middle School since 2004. His career as an engineer would take he and his family to jobs in California and Delaware. The family would return to Fulton County in 1957, where he would work for various area engineering firms and was a member of the American Society of Electrical Engineers.

Fredericks converted to Catholicism after his marriage and was very active with St. Mary’s Church in Gloversville. He was also a 3rd Degree Member of the Knights of Columbus Council #265 in Gloversville, where he served as the Council’s Grand Knight from 1963 to 1965. Fredericks passed away in 1982 at the age of 57.

Fredericks’ Johnstown made Denkert Baseball Glove that he used during his entire semi-professional and professional baseball career is on display at the Fulton County Museum in their “History of Fulton County Baseball Timeline Exhibit.”

Fredericks has been nominated for induction into the Fulton County Baseball & Sports Hall of Fame. His induction will take place on Aug. 11 at Parkhurst Field in Gloversville. He will join Gloversville baseball pitching legends Tom Foster, Jack Sanford and Chicks Musillo, who will also be inducted between innings of a Vintage Baseball Game taking place between the A., J. & G’s and the Mountain Athletic Club from Fleischmann’s New York using 1895 style baseball rules and era authentic equipment. Fredericks will be represented by his family. The day’s events start at noon.

Mike Hauser is the founder of the Fulton County Baseball & Sports Hall of Fame in Gloversville. If you have story ideas, old articles/photos or would like to nominate someone for the HOF, he can be reached through the organization’s website at www.fchof.com , email; mhauser@frontiernet.net or call 518-725-5565.