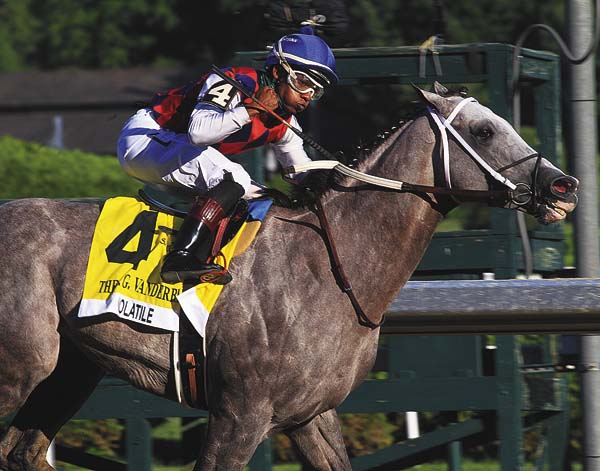 Volatile faced a small but impressive field in the 36th running of the Grade I Alfred G. Vanderbilt for three year olds and up at 6 furlongs. Volatile ridden by Ricardo Santana Jr. won its third straight win in 2020 and is 5 of 6 in its career. (Photo by Spencer Tulis)

SARATOGA SPRINGS — Volatile extended an impressive start to his 4-year-old campaign, staying undefeated in 2020 after going to the front and drawing away from the four-horse field in the stretch for a 1 1/4-length win in Saturday’s Grade 1, $250,000 Alfred G. Vanderbilt Handicap at Saratoga Race Course.

Owned by Three Chimneys Farm and Phoenix Thoroughbred III, Volatile started his 2020 season with a 7 ½-length allowance score in April at Oaklawn before dominating in his first stakes appearance with an eight-length triumph at Churchill Downs in the Aristides on June 6 that netted a 112 Beyer Speed Figure.

Whitmore, the 4-1 second choice, broke through the gate before the start of the race but was quickly pulled up by jockey Joel Rosario. Lexitonian, the longest shot on the board, was subsequently scratched at the gate, and the four-horse field was backed out and then reloaded.

Volatile, who Hall of Fame trainer Steve Asmussen moved up in class, wasn’t fazed by the slight delay, going an easy quarter-mile in 23.46 seconds and the half in 46.67 on the fast main track.

Volatile set the pace and kicked on when straightened for home by jockey Ricardo Santana, Jr., repelling Whitmore’s inside bid near the top of the stretch before completing six furlongs in a final time of 1:09.61.

The Violence colt improved to 3-for-3 this year and is 5-1-0 in six career starts – all at six furlongs. An $850,000 purchase at the 2017 Keeneland September Yearling Sale, he has won four straight starts and has earned winner’s circle trips at four different racetracks.

“He was really on his toes today,” said Santana, Jr., who won two on the card. “Steve gave him a lot of time from his last race and he was feeling great. I was really happy with how he was out there. I’m glad we backed off from the gate again. When we came up [to the gate] he relaxed really well and then I was happy because I could see he was ready to go. The gate opened and he put me in the spot that he wanted, and I was happy, too. Turning for home, he kicked really well.”

The 2-5 favorite, Volatile returned $2.80 on a $2 win wager. He improved his career earnings to $341,040 and gave Asmussen his third career Vanderbilt win, joining Justin Phillip in 2013 and Majesticperfection in 2010.

“We saw the first two races from him this year and they were absolutely brilliant,” Asmussen said. “I feel very good about getting those races into him before he met accomplished horses like this. But from an ability or a speed level, he has it all.”

Asmussen said he was confident Volatile could be stretched out at some point. The conditioner said the plan is to target the Grade 1, $2 million Breeders’ Cup Sprint on November 7 at Keeneland.

“We will discuss it, but we obviously feel the Breeders’ Cup is where we want to be with him at the of the year and how we get there from here is going to be the plan,” Asmussen said.

Six-time graded stakes-winner Whitmore finished a half-length in front of Mind Control for second. The Ron Moquett trainee, whose previous Saratoga appearance was a victorious 2018 Grade 1 Forego, was making his first start since winning the Grade 3 Count Fleet Sprint in April at Oaklawn.

“I was in a good position and he was enjoying everything in there,” Rosario said. “I thought for a second we were going to come and get the winner, but he was too good today. I was up close and my horse was there for me. I could see the pace wasn’t very fast, but he was travelling hard and very comfortable on the inside there. He’s a champ.”

Mind Control, who won the Grade 1 H. Allen Jerkens at the Spa last year for trainer Gregg Sacco, edged Firenze Fire by a neck for third.

SARATOGA SPRINGS — While nobody is perfect, New York-bred Somelikeithotbrown was plenty good enough on Sunday, surging to the front while keeping plenty in reserve for the stretch, going gate-to-wire for a one-length win over stablemate Mr Dumas in the Grade 2, $150,000 Bernard Baruch for 3-year-olds and up at Saratoga Race Course.

Against a six-horse field, the Mike Maker-trained Somelikeithotbrown broke sharp from post 3 and led through comfortable fractions of 24.79 seconds for the quarter-mile, the half in 49.08 and three-quarters in 1:12.43 on the firm inner turf.

In the stretch, jockey Tyler Gaffalione kept his charge alert near the rail, outkicking the field, including a charging Mr. Dumas at the end, to hit the wire in a final time of 1:41.32 for the 1 1/16-mile course.

“I was a little surprised down the backside when I was all by myself,” Gaffalione said. “I thought there would be a little more pressure, but I was happy with where I was and how he was running. All the credit to Mike and his team, they had him ready today.

“Every time I reached back and threw a cross and when I got into him a little bit, he kept on responding and giving me more, so I was pretty confident coming to the wire,” he added.

Skychai Racing and David Koenig’s Somelikeithotbrown earned black type for the fourth consecutive race, entering after a third-place finish at 1 1/8 miles in the Grade 2 Fort Marcy on June 6 on a Belmont Park turf course labeled good. Bred in the Empire State by Hot Pink Stables and Sand Dollar Stables, Somelikeithotbrown posted his first stakes win since the Grade 3 Jeff Ruby in March 2019 at Turfway Park.

“It did but you have to let him run his race,” said Maker when asked if he was concerned about the speed holding up. “I thought his last race, he went a little too quick and opened up a little too much. But I thought it was a very credible race.”

After crossing the wire, Somelikeithotbrown dismounted Gaffalione when moving from the turf course to the dirt en route to the winner’s circle. Both the horse and rider were unhurt.

“I was very high on this horse and it looked like he showed up this afternoon as well,” Maker said.

Halladay, Olympico and Seismic Wave completed the order of finish.