With Damon Anderson putting bonuses up to the winners of every race, Scott McCoy (602 sportsman) and Luke Horning (pro stocks) picked up their first wins of 2020 as well as a few more first-time winners — Adam Tranka in street stocks and Frank Twing Jr. in junior slingshots.

For the Red Chair 602 crate sportsman feature, it was Brendan Gibbons leading the field to the flagstand. Scott McCoy took the advantage early on. Gibbons would run second for a little while however, he would pull off the track with a flat right rear tire. Meanwhile, Cody Ochs, Andrew Buff and Tucker O’Connor were putting on a show for the runner-up spot as they were all under a blanket for multiple laps. This came to an end however at Lap 12 when a yellow came out for Ochs’ car turned around at the bottom of turn 2. 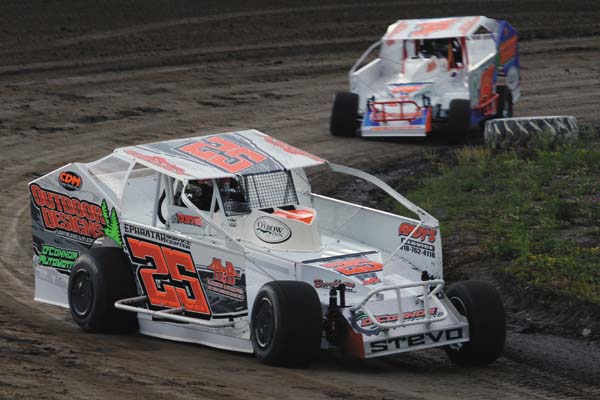 Tucker O’Connor used the restart to his advantage as he took away the second spot and was on the back door of Scott McCoy and would remain behind the 187 until a lap-21 caution for Tony Farone slowing in turn 2. Off the restart, Tucker O’Connor got shuffled back and that was all Scott McCoy needed as he took his second career win at The Ridge. Andrew Buff would finish as the runner up, Travis Green finished third, Justin Buff came home in fourth and Tucker O’Connor completed the top five.

In the Yurkewecz Auto Crusher pro stock feature, Cousin Luke Horning did not wait long to grab the lead as he powered around on the outside to go from fourth to first and take away the lead from polesitter Tanner Warner. From there, Horning began to open a sizable lead. Josh Coonradt in the 70x was beginning to work his way up through the field as he sliced and diced to second.

Behind the top 2, the battle for third was nail biting as Tanner Warner, Andy Graves and last week’s winner Beau Ballard were battling hard for position. This was all behind Horning though as Cousin Luke dusted the field to take his first win of 2020 and 27th overall win at The Ridge. Coonradt would finish in second, while Tanner Warner would finish in third, Beau Ballard and Andy Graves rounded out the top five.

Limited sportsman action got underway as Stephen Gray used the outside lane to take the lead from Isaac Walker. Gray appeared to be smooth sailing until a lap 5 caution which saw the early leader Walker around in turns 1 and 2. Troy Zilles used the restart as a launching pad as he quickly worked his way up to the runner up spot. Zilles did get as close as a car length from Gray’s back bumper.

Towards the later stages of the event, Gray had pulled away from Zilles and appeared to be on his way to a victory. However, a lap car held up Gray enough to let Zilles draw back in and make a run at the leader. It was all for naught as Gray picked up the victory. Zilles would come across the line second but would be disqualified in post-race tech. This made Garrett Poland your runner up. Peter Lorenzo III and Thomas D’Angelo would cross the line in fourth and fifth, respectively, but also would be disqualified in post-race tech. Therefore, Tim Billington, Paul DeRuyter and Teddy Star rounded out the top five 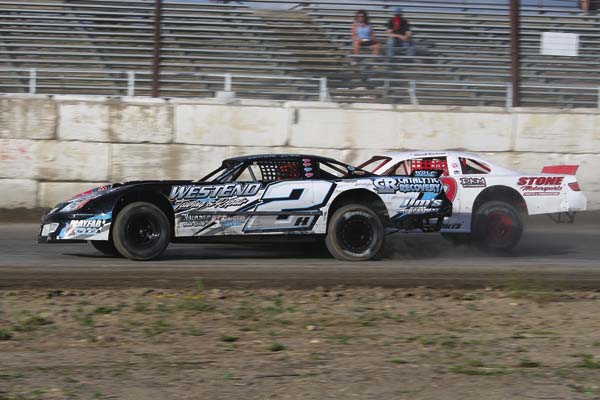 Street stock racing saw Adam Tranka and Damon Anderson put on a great race. Tranka in the end was able to pick up the win despite Anderson being right on his back bumper waiting for Tranka to slip up. Kenny Allen rounded out the top three.

In the all-star slingshots, Tucker Jones took the lead early on but contact between the 33 of Jim Gaige and 1 off Brett Putnam in turn 4 stacked the field back up. Off the restart, Connor Hill overpowered Jones for the lead. Jones would not remain second for long however as he appeared to have a flat tire and pounded the wall out of turn four, ending his night. From there, Connor Hill drove away from the field to pick up the win. Mike Hill came home second, Dan Ballard finished third, Jim Pollard and Brett Putnam rounded out the top five.

In the junior slingshots, Corky Warner was the pole sitter but the driver on the move was the 1 of “Kid Dynamite” Frank Twing Jr. Jr quickly moved from his 5th starting spot up to 2nd by lap 2. However, just as Twing was going for the lead a caution came out. The 68 of Hayden Ackernecht went for a ride that ended with the car on its side. Once racing resumed, Twing powered around Warner and cruised to his first career win. Lucas Duncan would wind up second, Corky Warner third, Brock Pinkerous came home fourth and Sloan Cherko rounded out the top five.

The mini stock 15-lap feature saw John Napoli lead early but Josh Kane grabbed the top spot away and took home another win in the dual cams. In the single cams, Dale VanAllen cruised to victory.

The Ridge is back in action this Sunday for a mid-season point blast. Double points will be awarded in all divisions. Pits are scheduled to open at 3 p.m., hot laps are set for 5:30 p.m. and heat races are set to begin at 6 p.m. Pits will be open, masks required, and social distancing is in effect. Grandstands will remain closed. 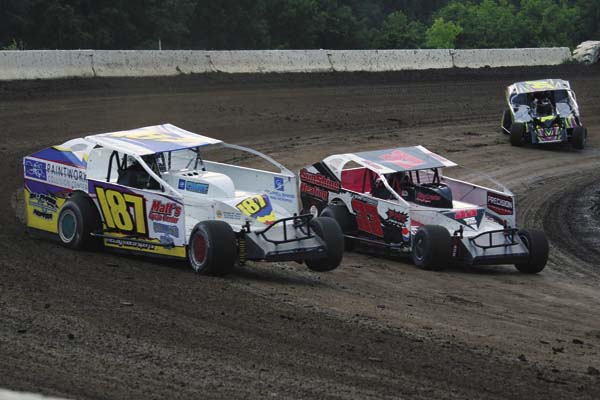