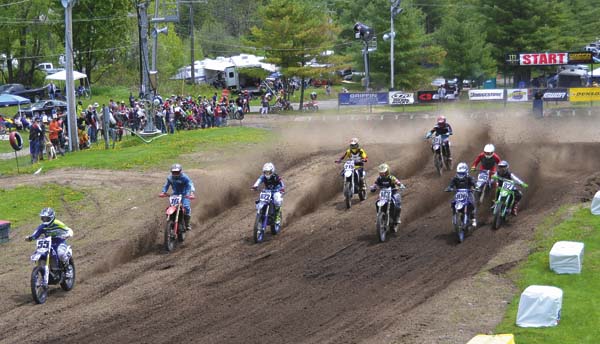 That did not happen this year due to mandates surround the coronavirus pandemic.

Now that the Mohawk Valley region has entered Phase Four of the New York State reopening plan, Royal is ready to host its first event of the season — a two-day Central New York Motocross Racers Association event on July 4 and 5.

“Losing Memorial Day Weekend hurt,” Royal Mountain owner Jim Blaise said. “Of course it turned out to be sunny all weekend, too. Two-day races are good here. Some people travel a ways and they get to stay here and race for two days instead of drive for three hours, race for six and then drive home.”

Without racing action for the first month of the season, race director Jake Tennis made the most of the down time to reconfigure and upgrade the racing surface.

“Normally we have about a two-week window between snow on the slope and Memorial Day Weekend,” Tennis said. “It is usually too wet to do what we need to get done. During the time on pause we have reworked the entire track. We changed major layout locations, adjusted, changed and added a lot of features with different jumps. We made the track ridable for all levels of riders — novice, minis, 80s all the way up to expert and pro riders — and to be safe for all of them.”

Blaise commended Tennis for the improvements and hard work he has put into the facility during the pause.

“He didn’t just change a few jumps, it is a total new track,” he said. “Jake was doing the track from the time he was about 17 to 21 so he knew what he was doing to begin with. He is running the track situation himself now. He must have over 50 hours a week on the bulldozer.”

Old culverts have been removed and replaced to improve drainage; the racing surface has been widened.

“Hundreds of yards of screened top soil went on the track and instead of skimming over the rocks, we dug it out a couple of feet and put it in the pile to be screened,” Tennis said. “Our top soil pile may be gone be we have another pile ready to make more top soil. We have made improvements to both the motocross and the supercross tracks. There are new and different features on the motocross track. The same thing on the supercross track that we run on Wednesday nights. There are going to be extremely noticeable changes in the track layout.”

The top portion of the supercross track has been upgraded by widening out and eliminating the steep downhill by taking the corner into the woods, giving the riders a flatter downhill, also allowing for new features before and after the slope.

The large tabletop is being replaced with a whoop section leading into a banked corner and a tabletop. The tight hairpin turn after the tabletop has now been eliminated and will now head off into a former grassy area with a step-up turn that will lead back into the big-bowl corner.

After the finish line jump, instead of going behind the starting gate and onto the frontstretch, the bikes will go through another feature to slow them down a bit before heading back up the frontstretch hill. It also opens the area behind the gate for a staging area to keep the racing action moving.

“A lot of people are excited about the changes and can’t wait to get on it,” Tennis said. “We have had a lot of good feedback about it.”

CNYMRA has hosted a couple of racing events already this season and has provided invaluable information for the other facilities in Region III.

“They had one at Paradox MX [Granville] and there was a race this weekend at High Voltage Hills [Greig] and so far everything has been going off without a hitch as far as I know,” Tennis said. “We stay in touch with the president of the association and he gives us feedback. We have bi-weekly conference calls with all the track owners to help everybody to work with their local officials.”

Teams will have certain protocols to follow before entering the pit area for the weekend.

“Due to the facility and the amount of riders, the place will probably be packed full of riders and crew members,” Tennis said. “They won’t have specific pit areas, but we do ask that anybody that is here, if you are in a public location [the lodge, concession stand, away from the pit area] we want you to wear a mask. But if you are around your trailer and people you came with, you do not have to be wearing a mask.”

When arriving at the entrance, teams will be asked to stay in their cars, but roll down the windows so the occupants can be scanned to check temperatures.

“We will have extra staff at the gate to scan temperatures to make sure nobody is over the threshold of the CDC guidelines,” Tennis said. “If you are, you will not be allowed to enter. Everybody who shows up in a vehicle, I don’t care if you don’t have it on in your vehicle or pit area, but I need to see that there are enough masks available for everyone in your pit area. If you don’t have enough, you will have to buy one at the gate. We don’t want to have sell them to anyone but we have to have them available so that everyone here has one.”

Tennis recommended that race teams go to the Royal Mountain website before heading to the track to check out protocols that will be in place and what can be done to make it a safe weekend for everyone.

“We have a Safe to Race Toolkit on the website under the motorsports tab,” he said. “In there are all the directions you need to follow to be at a facility. It is not one sheet, there are different tabs you can open up that explain things that you might want to bring with you. The Safe to Race Toolkit is the guidelines we are going to follow.”

Royal Mountain has also been in touch with the local agencies to make sure then are complying with the recommendations.

“We have been working with the head of the Fulton County Health Department,” Tennis said. “They have been reviewing all of our documentation and said it all looks pretty good. We wanted to get it in their hands and make sure that they didn’t see something we were missing. So far we are set to go on the fourth and the fifth.”

The weekend activities also will provide insight into changes that may be necessary before the facility opens for its weekly Monster Supercross season on July 8.

“We are using the fourth and fifth as a dry run to make sure everybody is complying and we are doing what we need to keep everybody safe,” Tennis said. “Then if it is feasible, we will proceed forward and possibly extend the season to get our 10- to 12-race season in.”

General admission will be $20 for the weekend or $10 per day.

“This will be the building block,” Tennis said. “We need to see if this goes off without a hitch before moving forward.”