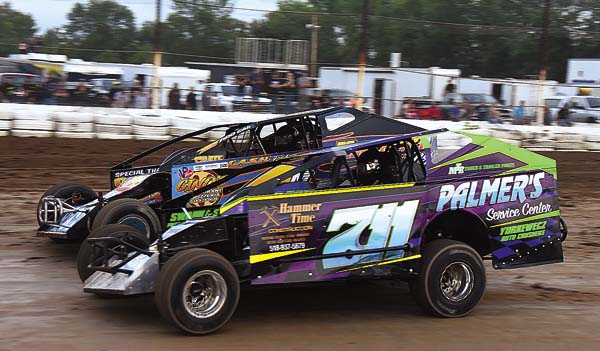 JaMike Sowle (711) and David Manchester run wheel-to-wheel for a qualifying spot in a Crate 602 Sportsman heat race Saturday night at Fonda Speedway. (The Leader-Herald/James A. Ellis)

FONDA — It was a night for first-time winners Saturday at Fonda Speedway.

After making several trips to the Track of Champions for special events, Jeff Heotzler signed on as a weekly competitor in the Palmer Service Center No. 76 and is his third week in the ride picked up his first feature win.

Also picking up their first career wins at Fonda Speedway Saturday night were Johnny Young in the Limited Sportsman division, Lou Gancarz in the street stock division and John Napoli in the DOHC cruiser class.

Scott Huber and Heotzler brought the field of 24 Sunoco modifieds to the green with Heotzler getting out front from his outside pole starting spot. 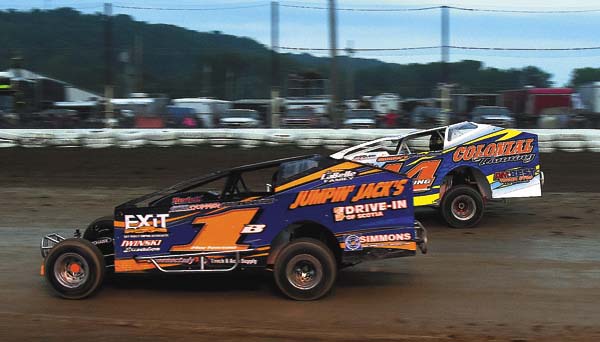 Brett Mortensen tries the low side on the short chute between turns three and four to get the lead from Johnny Young in the Limited Sportsman feature Saturday night at Fonda Speedway. (The Leader-Herald/James A. Ellis)

Huber pressured the veteran driver through the opening laps but dropped back on a lap six restart as Craig Hanson took over the second spot, leaving Huber to battle with Danny Varin and Josh Hohenforst for third.

Varin, who narrowly missed breaking the modified track record of 18.136 set of by his father Bobby on April 11, 2009 with a lap of 18.199 in his heat race win, pulled into second as the leaders began encountering slower traffic.

Hohenforst found his way around exiting turn four on lap 23 but Varin got the spot back two laps later, just before the caution flew for Hanson, who suffered a flat tire with five laps remaining.

He was able to make repairs and rejoin the field at the rear.

Rocky Warner and Matt DeLorenzo joined the front runners in fourth and fifth respectively, setting up a five-car shootout for the $4,000 first-place money. 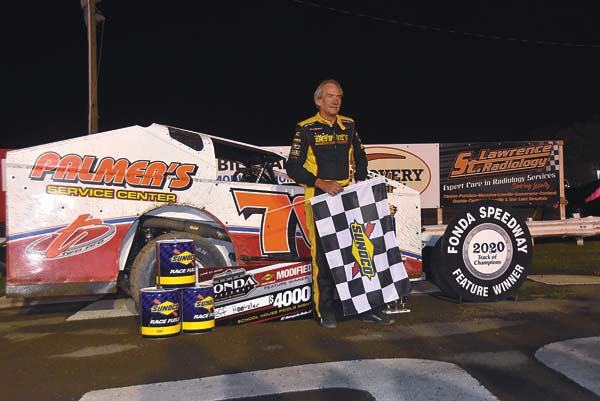 Jeff Heotzler celebrates in Victory Lane after posting his first career win at Fonda Speedway in the 30-lap, $4,000-to-win School House Pools Shakedown for he Firecracker 50 Saturday night. (The Leader-Herald/James A. Ellis)

“Thanks to Alton and Carole for choosing me to drive this racecar,” Hoetzler said in the Victory Lane. “We really couldn’t get a handle on this Teo Pro car, but we were finally able to do so this week. Hopefully, we can keep it up front.”

Varin followed Warner home in third, with DeLorenzo getting up for fourth and Hohenforst fifth. Huber, Adam McAuliffe, Michael Maresca, David Schilling and Brian Gleason rounded out the top 10.

Kevin Chaffee and Rick Quick led the field of 28 Swagger Factory Apparel Crate 602 Sportsman to the green with Chaffee leading the opening lap before Quick found his way to the front on lap two.

Chaffee took the lead back on a lap-seven restart with Tucker O’Connor moving up to second with Tim Hartman Jr. and Cody Clark in pursuit. 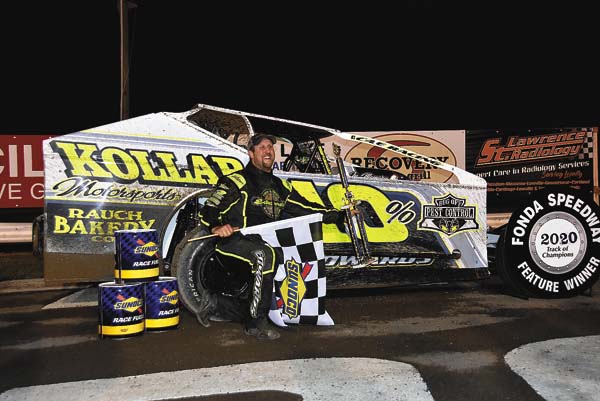 Chaffee was able to hold off Hartman on the restart and Quick got around O’Connor for this as Edwards pulled into fifth on lap nine.

After the field again was slowed for a caution that ended O’Connor’s night, Edwards made the most of the restart to bolt from third to first on lap 12.

“It’s been a great start to the season for us,” Edwards said in Victory Lane. “I tore the left front off of the car in our heat race and got it fixed but while lining up to go out for the feature I noticed the tow was off as it just didn’t look right so I went back to our pit area and the crew adjusted it. We switched to a new Bicknell car for this season and thanks to John Kollar for sending me the money all winter long from his Florida home in order to make this all happen.” 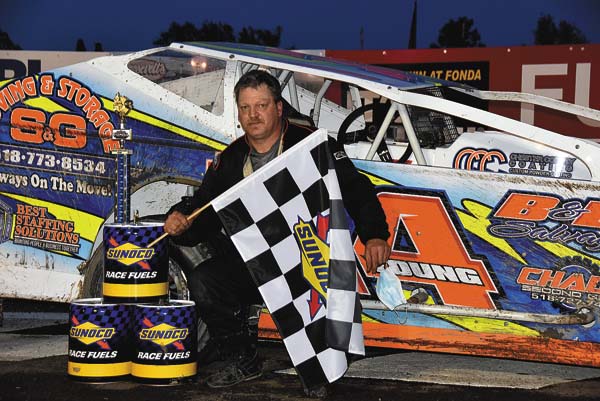 Jason Morrison showed the field of 19 Algonkin Motel Pro Stocks the fast way around the track for the first eight laps of the 20-lap feature before Jim Normoyle took the point on lap nine.

Chuck Dumblewski settled in behind Normoyle a lap later before the yellow flew on lap 10.

Stone, who started 12th, quickly made his way to the front from third on the restart and took the lead on lap 13.

Stone pulled away to post his second win of the season and Normoyle held off last week’s winner Josh Coonradt for second, while Kenny Gates and Luke Horning completed the top five.

Young started fifth in the field of 11 Montgomery County Office for Aging limited sportsmen and got to the front on the opening lap with Stephen Gray holding down the second spot. 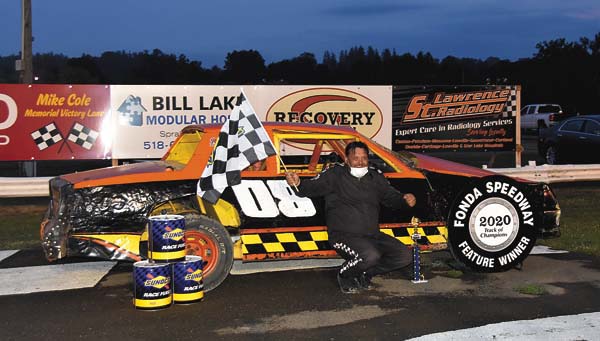 Brett Mortensen, who started 11th after winning the first two features this season, pulled into second behind Young on lap six.

Young held off several challenges from Mortensen setting up a thrilling final lap.

Young, who had been running the high line through turns three and four, dropped to the low side in three to take Mortensen’s preferred line away. Mortensen swung to the high side on the short chute between three and four and pulled even as the two exited turn four.

Contact hooked the cars together as the raced to the checkers with Young getting the win.

Lou Gancarz led all 15 laps in the Robert’s Towing & Recovery Street Stock feature for his first career win at Fonda over Dave Horning Sr., defending track champion Jason Samrov, Mark Burch, and Josh Samrov. Al Relyea, who won the first two races of the season, finished the event in the second position but was disqualified in post-race inspection.

Hollenback wasted little time getting to the front from his ninth place starting spot and lead all 15 laps of the Four Cylinder Cruiser feature.

Dale VanAllen followed Hollenbeck under the checkers as he recorded his 52nd career cruiser division win at Fonda Speedway. John Napoli was third under the checkers and the first Dual Overhead Cam car. Zach McSpirit and Shawn Hemstreet rounded out the top five.

In last year’s inaugural Firecracker 50, Stewart Friesen and Matt Sheppard traded paint off the fourth turn on the final lap with Friesen getting the $10,000 victory.

It was announced Sunday afternoon that the infield and the grandstands will be open for spectators on Wednesday with masks and social distancing required.

The infield drive-in will be $85 for four passes, while the grandstand general admission will be $20 for adults.

The race will also be streamed live on Dirt Track Digest.