Broadalbin-Perth's Dante Calderone sacks Ravena-Coeymans-Selkirk quarterback C.J. Bianchino (16) for a loss in the first quarter of a Sept. 7, 2019 Class B game at Patriot Field at Broadalbin-Perth High School. (The Leader-Herald/James A. Ellis)

BROADALBIN — When the Broadalbin-Perth baseball team opened practice in early March, Dante Calderone was poised to cap off a standout senior year as the Patriots’ third baseman.

However, the coronavirus pandemic forced the closure of schools and the cancellation of the spring sports season for all teams in New York state.

“The atmosphere we had as a team was great,” Calderone said. “The first two weeks that we got to practice, we had a good time. We all had different personalities but all got along real good and I think we were going to be a pretty good team, too.”

During the fall season, he stepped up to quarterback the Patriots football team after previously playing running back. Calderone also played on the defensive line, earning all-state honors in his junior and senior seasons. 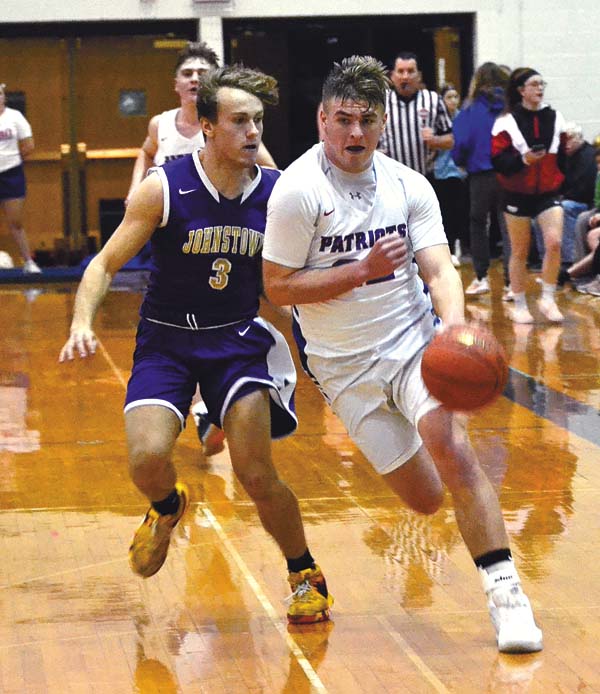 Switching to playing quarterback was a challenge that Calderone.

“The coaches did a great job getting me ready to play both positions this year but it took a lot of time in the weight room and putting in the extra work during the summer in the 7-on-7 games,” he said.

Having his uncle, Vinnie Calderone, on the Patriots’ coaching staff also helped.

“There were advantages and disadvantages,” Calderone said. “He critiqued my play harder than anyone else but it made me a better player; but at the time I would be annoyed with him.”

As a four-year member of the Patriots’ varsity basketball team, Calderone picked up a lot of big game experience that helped him in a leadership role as the lone senior on the team.

“It was a pretty cool actually,” he said about being the only senior. “I got to help a lot of kids out that knew their stuff about basketball but didn’t know some of the things that I did from playing four years on varsity. It was nice to get a chance to help them out.”

His efforts helped the Patriots become one of the top defensive teams in Section 2 and finish the season with a 14-8 overall record.

His consistent play earned him a spot as a Foothills Council first team all-star as well as Class B all-state honors.

Calderone said the shut down for the pandemic has affected everybody in the school, not just the seniors and student-athletes.

“Nobody really knows what is going on so everybody has different emotions,” he said. “The seniors are missing out on their last sports season that some of us have been playing for most of our lives. People are just sad.”

Looking forward to the fall Calderone said he was still undecided as to whether he will continue his sports career at the college level or head to a trade school specializing in electrical work.

“I want to thank all the coaches, my family members and everyone in the community that helped me,” Calderone said and offered advice to kids coming up through the ranks; “Don’t take what you have for granted. Keep working hard and do what you have to do to get better. But have fun. You always have to have fun otherwise you won’t enjoy it.”