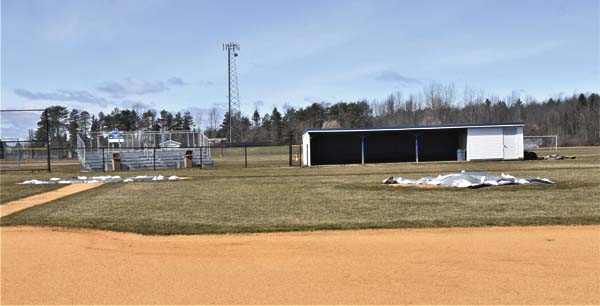 Tarps cover the pitcher's mound and home plate of the Fulton-Montgomery Community College baseball diamond Friday. The Raiders had their season, as well as the college's softball and golf teams, cancelled due to the mandate to close schools because of the COVID-19 virus. (The Leader-Herald/James A. Ellis)

JOHNSTOWN — The Fulton-Montgomery Community College baseball team was slated to open its Mountain Valley Athletic Conference season Sunday with a doubleheader against SUNY Adirondack at the Route 67 campus.

But now the Raiders won’t get a chance to play this season due to the cancellation of all the spring sports seasons by the National Junior College Athletic Association.

On March 16, the NJCAA president and CEO Christopher J. Parker issued a statement saying, “Following the recent recommendations from the Center for Disease Control and Prevention (CDC), the NJCAA has made the difficult decision to cancel all upcoming basketball championships as well as spring competition, effective immediately. Spring competition includes all practices, regular season, postseason, and national championship play. Along with the cancellation of competition, all on and off-campus recruiting for all sports will be halted until April 15 with further evaluation to be assessed at that point in time. Our goal is to look after the safety and security of all involved, while also still providing a pathway to allow opportunities for our student-athletes and the ability to compete for a national championship. The NJCAA will continue to monitor and make adjustments as needed.”

FMCC director of athletics and head women’s basketball coach Kevin Jones said he does not expect anything to change after April 15.

“Our seasons are so short, we have to be done by the beginning of May, and I don’t think this thing is going to go away soon,” he said. “So, I don’t think there will be time to reinstate anything.”

Tarps cover the pitcher's mound and home plate of the Fulton-Montgomery Community College baseball diamond Friday. The Raiders had their season, as well as the college's softball and golf teams, cancelled due to the mandate to close schools because of the COVID-19 virus. (The Leader-Herald/James A. Ellis)

The cancellation of the seasons along with the FMCC campus and the high schools in New York being shut down and offering classes on-line makes it difficult to recruit student-athletes for next year.

“You can’t go see anybody play and you have to do things over social media and the phone,” Jones said. “I usually would go down to a couple of showcases and see what kids are there. But now everything is cancelled. The recruiting will be difficult. I am sure some schools already have kids in the mix. One question now is does a kid want to leave his area knowing what’s going on. Some kids still want to play. With high school baseball coming up we would have been out seeing who is available and talking to seniors. Now you can’t do anything. Recruiting is going to be extremely difficult. I think this is going to be an issue for a lot of places.”

“I hope everybody can get back on track,” Jones said. “You hate to have the kids not have the opportunity to do what they want to do, play sports.”

Worry, haste, retail therapy: What have we bought and why?