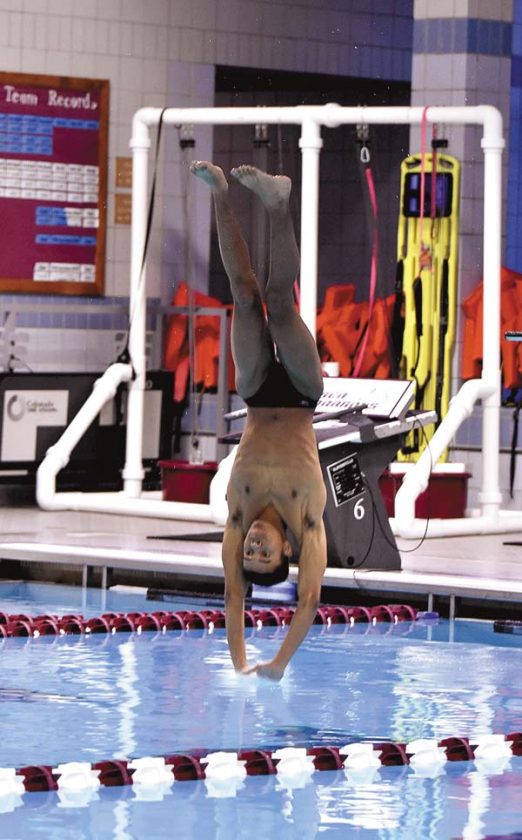 Gloversville-Mayfield diver Yxlphrm Burke stretches for the water to complete a dive during a Foothills Council meet against Queensbury on Jan. 30 at the Gloversville Middle School pool. (The Leader-Herald/James A. Ellis)

Several Gloversville-Mayfield swimmers were among those named to the 2019-20 Foothills Council boys swimming and diving all-star team.

Dane Dillenback was named to the first team in the 100-yard butterfly for Gloversville-Mayfield, while Yxlphrm Burke (1-meter diving) also earned first-team honors for the Sea Dragons.

Gloversville-Mayfield’s team of Dillenback, Sweeney, Kazuma Lomanto and Ben Smouse was named honorable mention in the 200 medley relay. The same quartet also was named to the second team in the 400 freestyle relay.

Queensbury and Glens Falls combined to occupy 10 of the 12 first-team spots.

T.J. Bearor was named to the first team in the 50 and 100 freestyle, while Aidan Ford (100 breaststroke) also earned first-team honors.

The Spartans also had their 200 medley and 200 freestyle relay teams named to the first team.

Fonda-Johnstown, Amsterdam and Hudson Falls-South Glens Falls did not have any swimmers named to the all-star team.