Bouchard did not let injury sidetrack his varsity career 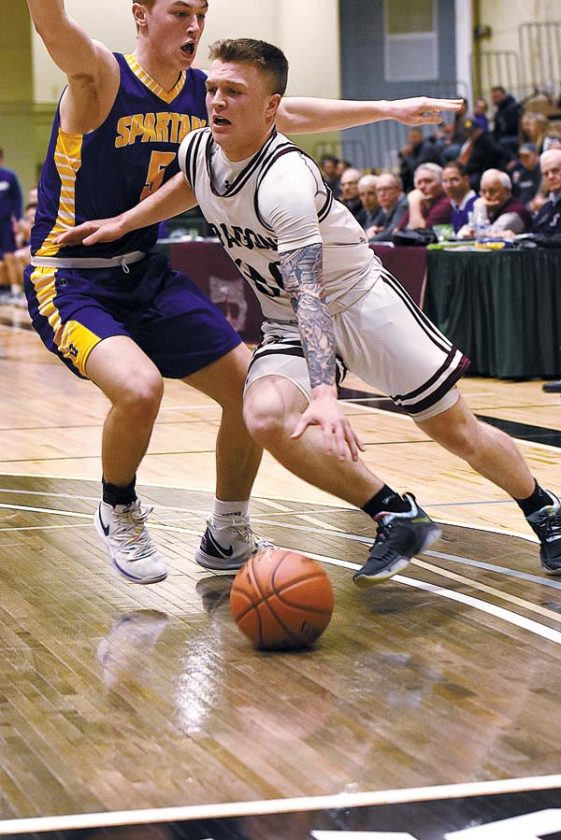 GLOVERSVILLE — Dante Bouchard is known for his gritty performances on the basketball court during his four-year varsity career at Gloversville High School.

However, the toughest obstacle he faced happened off the court near the end of his sophomore year.

Bouchard was a passenger in a car involved in a head-on collision and was hospitalized with serious injuries.

“I missed the last couple of weeks of school because I broke my back in a head-on collision,” Bouchard said. “I broke two bones in my back and tore the muscles. I spent a couple of days in the hospital. Afterward I couldn’t walk for a while. Then I was able to get around with a walker and then a cane before being able to walk again without help.”

With months of rehab, Bouchard made progress but was not cleared to return to action on the varsity golf team in the fall. Instead he set his sights on returning to action for his junior season on the basketball court.

“It was a slow process back with the rehab,” he said. “I couldn’t get cleared to play golf or football in the fall but there was a good chance I could get cleared for basketball.”

When the Dragons opened their 2018-19 season against Amsterdam, he was ready to go, hitting 33 points in the victory over the Rams.

Three games later he hit 29 points against Glens Falls to reach the 1,000-point career scoring milestone and hit 31 points in the Section II Class A championship game against Troy.

The efforts began to take their toll.

“I played with my back taped up and had to ice it every night. I don’t think there was a game that it wasn’t swollen afterward,” Bouchard said. “It also made it hard to shoot because it hurt sometimes to lift my arms for a shot. Coach [Aric] Kucel kept an eye on me and there were some days we had a little lighter practice or I sat out. After the game with Troy, I couldn’t even get out of bed the next day.”

During the off season, Bouchard continued his rehab and hit the weight room to improve his upper body strength, a move that proved beneficial as he drove to the hoop hard, often drawing fouls along the way. Combined with his outside shooting ability, especially from behind the 3-point arc, he became a tough matchup for opposing defenses.

“He’s the most determined athlete I’ve ever coached,” Coach Kucel said. “If there was an obstacle in his way, he’d find a way to go over, under, around or go through it.”

Bouchard hit for 599 points in his senior year, including a buzzer-beating 3-pointer in the Class A quarterfinals to beat Queensbury and lift Gloversville to a third-straight trip to the Cool Insuring Arena in Glens Falls.

The Dragons season came to a halt with a 79-53 loss to eventual champion Mekeel Christian Academy in the semifinals.

Bouchard hit 17 points in the game to finish his four-year varsity career with 2,085 points, placing him second on the all-time scoring list for the Dragons.

Bouchard reflected back on the his first varsity game and being a starter as a freshman, along with fellow freshmen Anderson Jones and Joey Rowback.

“As freshmen we were playing before small crowds and there was a lot of hate because we were freshmen starting on varsity,” he said. “By the end though we changed that around. I remember this year, before we tipped off our first game, Kadyn [Ruggeri] said to me “this is our last first game.” That kind of hit me.”

After going 7-14 in their freshman season, the trio led the Dragons to a 54-14 record over the next three years and their first Foothills Council championship since 2009.

Looking back at his career scoring milestones, the 2019-20 Foothills Council MVP said, “There was a big difference between getting to 1,000 and 2,000. With 1,000, I had no clue and didn’t really understand why everyone was cheering when I made a free throw [against Glens Falls]. Then they announced it. When I got 2,000 [Feb. 18 at Hudson Falls] I knew exactly what was going on that whole night. My teammates kept telling me how many more I needed. It was a relief to finally get it, but I wish it could have been at home.”

Bouchard is looking to continue his playing career at the college level, but has not made a decision as to where that will be.

“I have three different routes I can go and will be making a decision soon, but everything is being delayed because of the virus,” he said. “We can’t visit the schools and talk in person with people. There have been offers from a couple of D-2s and some interest from some D-Is and also there is IMG postgrad school.”

There were several people behind Bouchard achieving success in his high school career.

“I have to thank all my teammates, especially Buck Gasner, Julien Deumaga, Andrew Stanford and Keeshawn Brown for pushing me, coaches Kevin Jones and Aric Kucel and Steve Dagostino of Dags Basketball,” he said. “I really have to thank my dad [Mike Bouchard]. Without him this wouldn’t have been possible. He drove me all over the place to practices and to play and my mother [Deirdre] was a big influence. That is why I dedicated my 2,000th point to her.”