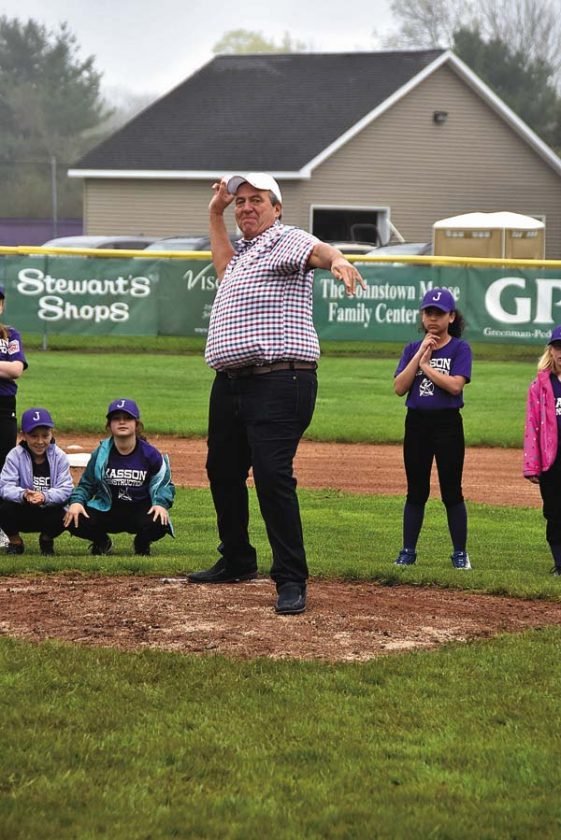 Rick Frasier throws out the ceremonial first pitch for the Johnstown Little League Saturday at Peter Hand Park in Johnstown on May 4, 2019. (The Leader-Herald/James A. Ellis)

The of the crack of a bat and the popping of the leather as the pitcher’s fastball hits the catcher’s mitt are sounds that will not be heard for a while at Little League parks around the world.

With the COVID-19 pandemic spreading, Little League International recently placed a notice on their website stating, “We recognize that this is the heart of the traditional Little League season, and we share in the great disappointment that many are feeling surrounding this additional pause in the 2020 season. However, it is our hope that by doing this, we will all play a small, but important part in flattening the curve in the spread of the coronavirus pandemic.”

The local Little League organizations are putting their seasons on hold in compliance with the organization’s directive.

The Johnstown and Fonda-Fultonville Little League organizations are following suit.

Players and coaches gather on the infield for the opening ceremonies for the Johnstown Little League at Peter Hand Park in Johnstown on May 4, 2019. (The Leader-Herald/James A. Ellis)

Registrations for the leagues have been under way since January and the process of setting rosters and schedules continue to be put in place.

“We have held sign ups and unfortunately our numbers are taking a hit right now,” Fonda-Fultonville Little League president Benjamin Kruger said. “We have left registration open in the hopes that some families will sign up once we start to see some light at the end of the tunnel.”

“Signups ran from January 1st through March 8th. We currently have 277 players registered,” DeMaio said. “We are excited about our new Coach Pitch Softball division we have implemented for this season. There are many things happening behind the scenes to plan for our 2020 season. Team rosters and schedules are currently in the works. We have an online coaching clinic that our coaches will be working on soon. Overall, we are continuing to do everything we need to do that when we get to May 11, we are ready to play ball.”

Players stand along the third-base line during opening day ceremonies at Parkhurst Field in Gloversville on May 4, 2019. (The Leader-Herald/James A. Ellis)

Klingbeil said that registration is still in process for Johnstown players.

“Signups have occurred, and we have approximately 160 total kids signed up between baseball and softball,” he said. “We still are accepting sign ups and for most of the lower divisions [T-ball, Coach Pitch]. “We leave registration open until opening day and do not charge any late registration fees.”

The pause in play also affects the organizations preseason activities.

“At this time, we are focusing on making sure we have a product to offer to the community when we can return to normalcy,” Kruger said. “We started an expansion project in the fall that will provide our Little League with handicap accessible toilets as well as expanding our current concession stand footprint. We have been up at our fields for a couple of weeks now working in small groups spread out so, that we are able to get work completed but not but anyone in harm’s way. If we do not continue upkeep then our fields and property will over grow and making it playable again will be an even greater task.”

Fundraising conducted to help the league’s meet expenses have also been put on hold.

Gloversville varsity baseball coach John Lott, left, and Gloversville 2nd Ward Supervisor Frank Lauria Jr. throw out the ceremonial first pitches for the 64th season of little league baseball at Parkhurst Field in Gloversville on May 4, 2019. (The Leader-Herald/James A. Ellis)

“Tag day is a tremendous fundraiser for us, we typically raise approximately $3,000 for the league in one day,” Klingbeil said. “Local businesses are fantastic with allowing our kids to stand outside their place and request donations from patrons. Local patrons have been extremely supportive and most don’t hesitate to donate. If we have a season, and it is safe to do so, we will certainly reschedule this fundraiser.”

“GLL will not be doing any fundraisers until the season officially kicks off,” DeMaio said. “At this point, we have three planned but that may change. We will evaluate which ones we plan to do the closer we get to the season. Being that we start in January searching for sponsors, we did not experience hesitation in that department. The pandemic we are currently going through was not really a factor in January. We are always very fortunate to receive an overwhelming amount of support from the community.”

Kruger said the Fonda-Fultonville fundraisers are also on hold but the expanded concession stand will be relied on to help bring in funds.

“Unfortunately, due to this pandemic we are unsure of what fundraisers we might be able to still hold,” he said. “We had planned a nightly numbers raffle for the month of June but, if we are unable to reach our teams and get the tickets out and sold, we will be forced to cancel. We also rely heavily on our concession stand revenue which will be talking a hit as well. Our league takes pride in our facility and making sure we can put the best product forward for not only our players and families but, for the players and families of every other league and team that visit our park.

The leagues are confident there will be a season and are moving ahead with plans for opening day ceremonies.

“The initial target has traditionally been the first Saturday in May,” Klingbeil said. “With the situation with Covid-19, we will have to postpone that to either Saturday May 16 or the 23,”

DeMaio added, “We are currently trying to figure out our official date for Opening Ceremonies. With not starting any activity until May 11 we need to give our coaches and players a little time to get acclimated to things. Our goal is within a week or two of being able to start any activity.”

Volunteers are working to get the Fonda-Fultonville fields ready for when the play resumes.

“We are still hoping for a May opening date but, we are also willing to push that as far back as June if families are willing to have a season that will fall into mid-July,” Kruger said. “Clean up has already started and will continue on a small scale until all restrictions are lifted. I have a group of wonderful board members who care about our kids and our community who are willing to do things during the week and on weekends as individuals to help knock out projects that we must complete in order to have a play ready facility.”

The leagues are reminding their players, coaches and volunteers to follow the precautions in place during the pandemic.

“We are extremely hopeful that we will have a season this year,” Klingbeil said. “We are working with other local Little Leagues and our District Administrators to do what’s best for the kids, community and the Little Leagues. If we as a community practice social distancing and take the proper precautions provided by the CDC, we can get through this and get that curve to flatten sooner, save lives, and have a baseball and softball season.”

“While we understand many of our families and players want to get outside and start getting the season going, we ask that everyone do their part in helping to slow this virus down,” DeMaio said “Grab a ball and throw around in your yard but please do not come to our fields. We do not want groups of kids gathering at the fields right now. Not only to prevent the spreading of COVID-19 but our fields are not ready. With this recommendation of delaying the season, we are also at a delay in prepping the fields. Most importantly , we want our players, parents, volunteers and community to all stay healthy and safe.”

Kruger said he and the Fonda-Fultonville board are doing everything they can to make sure the kids will be able to play.

“I know what the media is saying and I certainly understand the risk involved in community gatherings right now and, we as a league do not want to add to the pandemic,” he said. “With that said I promise the kids of this community and all the communities that we interact with that, I will do everything in my power to have some sort of normalcy for them this summer. I will not stop until there is no other choice. Little League Baseball and Softball is designed to help children have an outlet to get out with friends and forget about what else is going on in their lives. I want to make sure after all of this uncertainty that I can at least make sure they still have their Little League season.”