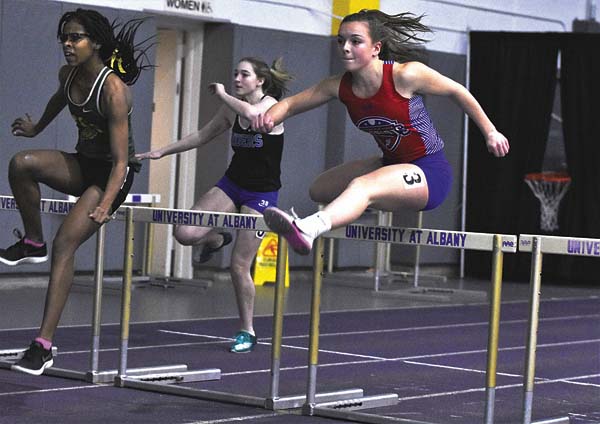 Broadalbin-Perth's Ava Tyler, right, was named a first-team Foothills Council indoor track and field all-star in the pole vault and 55-meter hurdles. (The Leader-Herald/James A. Ellis)

Several area athletes were among those named to the recently announced Foothills Council indoor track and field all-star team.

Amsterdam’s Connor Marbrey was named to the second team in the 3,200 meters. He also was named honorable mention in the 1,600 meters.

Gloversville’s Rhea Winter was named honorable mention in the 300 and 600 meters.

The Scotia-Glenville girls had Delaney Krogh (600, 1,000) and Stephanie James (1,500, 3,000) named to the first team in two events. South Glens Falls’ Lea Richard was a first-team selection in both the shot put and weight throw.

Rounding out the first team were South Glens Falls’ Christine Mallette (300), Abby Seaman (high jump) and Jedidiah Shortte (triple jump). Shortte also was named to the second team in the 55-meter dash, while Seaman was named honorable mention in the triple jump.