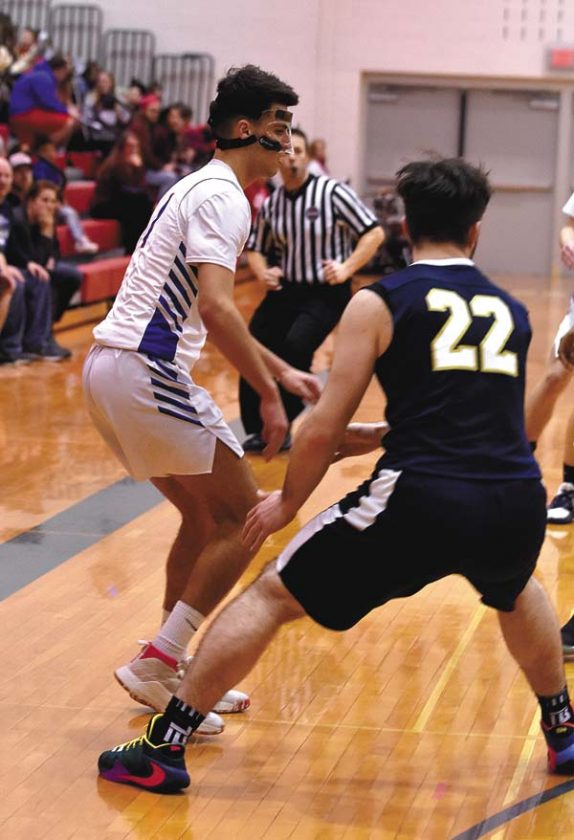 Broadalbin-Perth's Alexander DiCaterino is pressured by Cohoes' Ivan Brajac (22) as he passes the ball inside during a Section II Class B first-round game Tuesday at Broadalbin-Perth High School. (The Leader-Herald/james A. Ellis)

BROADALBIN — Dante Calderone has hit only four 3-pointers all season, but none bigger than the one he hit Tuesday night against Cohoes.

After trailing by 11 points with just over four minutes left in regulation, Broadalbin-Perth battled back and trailed the Tigers by three points. Calderone found himself open on the wing and buried a 3-pointer to tie the game with 5.1 seconds left on the clock to send the Section II Class B first-round game into overtime.

The fifth-seeded Patriots continued their run against the upset-minded Tigers with a quick barrage of 3-pointers to defeat Cohoes 60-52 and advance to the Class B quarterfinal to play No. 4 Mechanicville at 5 p.m. Friday at Shenendehowa High School.

Mechanicville advanced with a 66-63 overtime victory over Greenville Tuesday night.

“This was really big because my freshman year we made it to Shenendehowa and lost there,” Calderone said. “I wanted to get back there and with this team I knew we could do it because we have a whole lot of talent and everybody works together.” 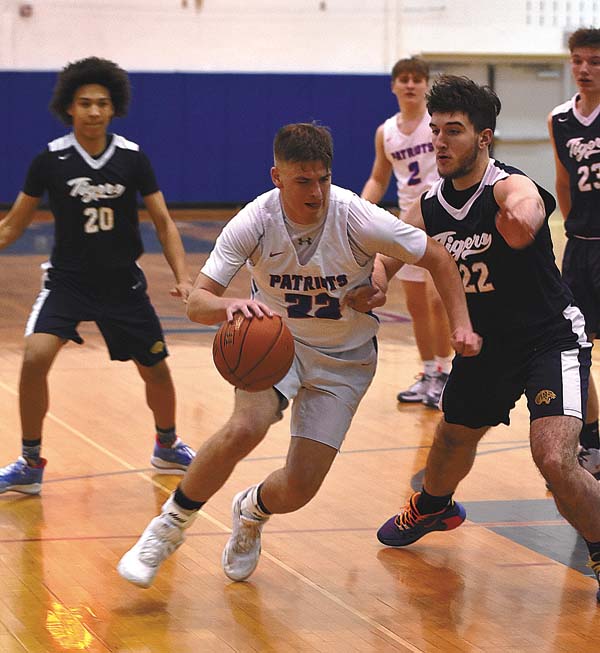 After swapping leads through the opening three quarters of Tuesday’s game with neither team holding more than a five-point lead, Cohoes broke away for an 11-point advantage, 40-29, in the opening minutes of the fourth quarter.

The Patriots began their comeback rally with a 3-pointer from Mariano DiCaterino with 4:02 left in the game.

DiCaterino’s 3-pointer sparked a 15-4 run by the Patriots culminating with Calderone’s game-tying 3-pointer.

“It was kind of a loose ball and Jackson [Sassanella] picked it up,” Calderone said. “It was good court vision by him. I was just sitting there and thought might as well shoot it.”

The Patriots long-range shooters that had been quiet during regulation found their range early in overtime. 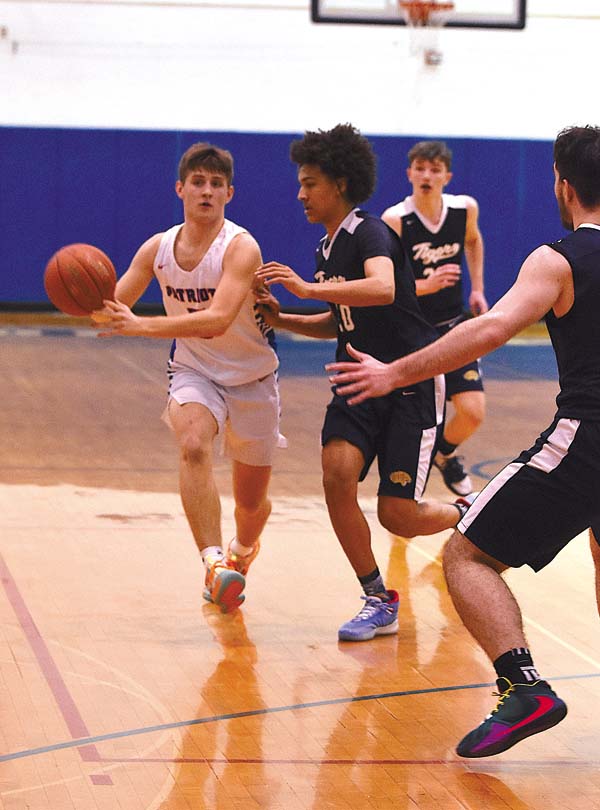 Broadalbin-Perth's Jackson Sassanella (5) passes the ball while under pressure from Cohoes' Jonathan LaSure (20) during a Section II Class B first-round game Tuesday at Broadalbin-Perth High School. (The Leader-Herald/james A. Ellis)

Jadon Wert and DiCaterino combined to score half of the Patriots points in overtime, connecting for nine-points, all from behind the 3-point line in the opening two minutes of the session.

The Tigers controlled the Broadalbin-Perth shooters by sending them to the foul line, where the Patriots converted on 9-of-12 attempts to pick up the victory and advance to the Class B quarterfinals.

“We fought like that all year so we were never out of it,” Broadalbin-Perth coach Tucker Gifford said. “When we got down by 11, our backs were against the wall and that’s when we came out fighting. Unfortunately, it wasn’t our best game tonight. But that is a tried and true sectional game for you. We got down and when it was time to start fighting, we did. Our energy picked up and it has done it all season for us. We are never out of a game.”

While Gifford was proud of the way the players responded on the scoreboard, he said the key to the Patriots’ comeback was shutting down the Tigers’ high-scoring freshman Royal Brown in the fourth quarter and overtime.

“Alex DiCaterino has been out three weeks with a broken nose and just came back four days ago,” Gifford said. “He gets our game ball without a doubt. He came in, shut him down, face guarded him and took him out of the ball game. After three weeks of not playing and he, hands down, changed that game. The advantage was having Alex and Cam Polikowski coming off the bench and picking up the slack for the guys who were struggling a little bit.”

Calderone led Broadalbin-Perth with his season-high 27 points, while Sassanella finished with 18 and Mariano DiCaterino added nine points to go with six points, all in overtime, from Jadon Wert.

Looking forward to Friday’s quarterfinal game against Mechanicville, Calderone said, “We will just keep fighting and playing together. We have done this all year; we go down and come back, so we knew we were going to have a chance to come back. Coach just kept encouraging us to keep fighting and doing what we have to do.”