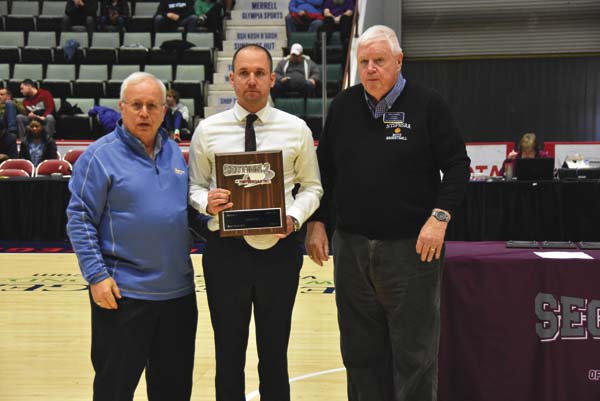 Mentor, coach and friend were all words that were used to describe local sports icon and administrator Bill Higgins.

Higgins died Monday night at the age of 83, just days before the start of the Section II boys’ basketball tournament that he was a major part of for many years.

Higgins served as the boys’ basketball coordinator/chairman for 27 years from 1989 to 2016 and worked tirelessly to bring the New York State Public High School Athletic Association to Section II at the Glens Falls Civic Center, now the Cool Insuring Arena. The state tournament returns to Glens Falls this year after being played in Binghamton the past three years.

He also served as a member of the NYSPHSAA Executive Committee and as state basketball coordinator.

“It won’t be the same going into the Civic Center this year,” former Gloversville boys varsity basketball coach Don Landrio said. “Spent a lot of time and effort helping improve the sport. Boys Section II basketball was important to him. He was also one of the founders of the Scholar Athlete Awards that are presented to senior athletes. He will be greatly missed.”

Higgins and Landrio were inducted into the New York State Basketball Hall of Fame in 2011.

“I got to know Bill well when he was at Fonda,” Landrio said. “He mentored a lot of us young coaches at that time and became a good friend to me. He was a very friendly, fun guy to be around. We are all shocked. He was a mentor to us young guys and made sure you understood what was important and what was going on.”

“He was Section II Basketball. He was New York State Basketball,” Satterlee said. “You couldn’t go to a Section II or state tournament game without seeing Bill. He was the glue that held everything together. He was one of those guys who was a mentor to many and will be truly missed on so many levels you can’t even begin to describe it.”

Higgins also worked as a football official in the Northern Adirondack Chapter for many years and was inducted into the Capital Region Football Hall of Fame last summer.

“He is the one who taught me how to be a referee when I started in 1974,” fellow Hall of Fame official Fritz Brownell said. “I saw him a couple years ago when his grandson was playing football for Schalmont. He came up to me and said, “You’re terrible.” I said to him “You’re the guy who taught me so don’t holler at me.” He was a swell guy.”

Fort Plain baseball coach and former varsity boys’ basketball coach Craig Phillips worked with Higgins during his tenures as superintendent in the district.

“I started coaching against him in Connie Mack Baseball and then got to know him more when I was coaching football at Fonda,” Phillips said. “He had two stints as superintendent at Fort Plain. He was just a good man. There weren’t many people who had anything bad to say about him. He is the reason the state tournament is where it is. He did a miraculous job for years.”

Higgins’ players remember him as being tough, but fair.

“Bill was a great guy. What you saw was what you got,” Tom Flint said. “He was tough but fair. He was a condition guy and you had to be in shape to play for him.”

John Mancini remember the coach, saying “We used to call him iron finger because he would poke you to make a point. At the end of the game you would have a bruise. He coached a lot of players. He was a positive influence and a great teacher and administrator. He kept things in balance and kept things moving, no doubt about that. He was a player’s coach.”

Ryan Stanzel played for Higgins when he coached the Galway varsity baseball team in 1996.

“Bill Higgins was a first-class educator, official and coach,” Stanzel said. “What made him so unique was his interest in each individual he mentored. He knew I wanted to be a New York Yankee. He pointed out my sub .300 batting average my senior year and suggest I may be better off working for them. I parlayed his advice to a 15 year career as a sports public relations executive including eight in the NHL. Bill truly formed relationships that continued a lifetime.”

Dave DiCaprio remembered Higgins stepping up to coach the Braves baseball team during his freshman season.

“Our coach’s father had passed away and he coached our team in the sectionals and we won two game, including beating Coxsackie-Athens which was 20-0 at the time,” DiCaprio said. “We were one game away from going to the finals. He was just a great coach and a great all-around person. I played ball with his son Kevin and grew up with his daughter Kim. They are a great family and he was a big Red Sox fan. My father was a big Yankees fan and they would always joke around and go at each other about that. He was just a great all around guy and will be a great loss for our community.”