When I was 10 years old in 1978, a project in Mrs. Clara Swarts fifth-grade class at Mt. Carmel School was a “10-minute oral presentation.”

The topic I chose was “the history of the Baseball World Series.”

It was during this project that I became enamored about the legend of Don Larsen’s Perfect Game in the 1956 World Series. His Oct. 8, 1956 Game 5 performance of recording outs on each of the 27 batters he faced marked just the sixth time a pitcher had accomplished this feat in baseball history, and the first ever in the World Series. The performance would earn him the World Series MVP and the Babe Ruth Award that year.

In February of 2006, while sitting in a marketing meeting as an employee of the Spray Nine Corporation in Johnstown, the discussion was how to celebrate the 50th anniversary of the formulation of the world’s first ready-to-use, spray-on/wipe-off cleaner (Spray Nine) in 1956. The brainstorming session evolved around what was happening in the world in 1956; historical events, and what was the most popular movie/book/song of that year.

Someone then asked me what happened in sports that year. I immediately quipped “Don Larsen threw a perfect game in the World Series.” 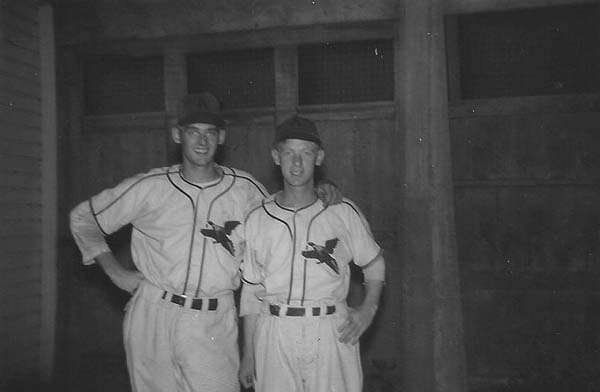 I reached out to former Gloversville Glover pitcher John Coakley, who had been a teammate of Larsen’s in the minor leagues. Both were pitching prospects with the St. Louis Browns and played for the Aberdeen Pheasants of the Class C Northern League in South Dakota in 1948. The duo anchored the Pheasants pitching rotation and Coakley (age 22) compiled a 12-6 record with a 3.69 ERA that season. Larsen (age 18) compiled a record of 17-11 and a 3.75 ERA.

Both were rewarded for their strong seasons with promotions in 1949 to the Class B Three I (Illinois/Indiana/Iowa) League with the Springfield Browns. Coakley produced a better pitching record that season going 5-8 with a 3.70 ERA, to Larsen’s 4-4 record and a 4.38 ERA.

According to Coakley, “Larsen missed a few starts in the rotation that season. We were out at a roadhouse after a game and playing pinball. Larsen got mad at the machine and put his fist right through the glass top. He cut his pitching hand and had to play a few games in the outfield while it healed.”

The two had exchanged Christmas cards each year since their playing days, so I knew Coakley had his mailing address. Using Coakley as a reference, I wrote to Larsen letting him know about Spray Nine’s interest in doing an endorsement deal with him. A few weeks later I received a call from Larsen’s agent Andrew Levy in New York City. We worked together on a concept of putting an ad featuring Larsen and Spray Nine in the 2006 New York Yankee Yearbook that was scheduled to be released that April. The ad would feature Larsen wearing a Spray Nine hat and baseball uniform, while holding a bottle of Spray Nine. The ad would also denote the major retailers that Spray Nine could be purchased (Ace Hardware/True Value Hardware/Do It Best Stores/Pep Boys / The Home Depot/and Boatingstore.com). 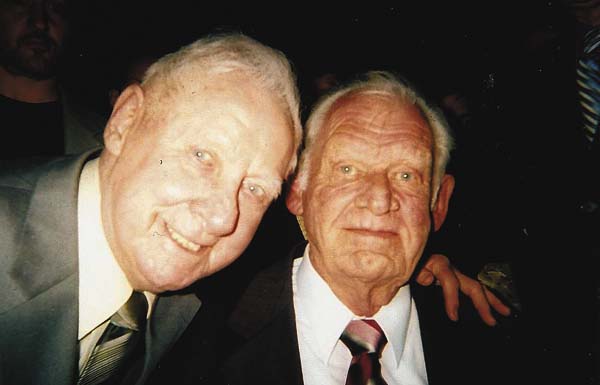 In addition to monetary compensation, the deal involved featuring an “ad within the Spray Nine ad” that advertised “The Perfect Evening”, which was the 50th Anniversary Celebration of Larsen’s Perfect Game that was scheduled for Nov. 4, 2006 in New York City.

Next came the fun part that allowed me to fulfill my life-long wish of getting to meet Larsen. A photo shoot was needed to get images of Larsen holding the Spray Nine bottle for the advertisement.

As I was preparing to schedule a flight to Larsen’s home in Hayden Lake, Idaho, Larsen and Yogi Berra were scheduled to do an autograph signing appearance in New York City a few weeks later.

Instead of flying to Idaho, I drove with my father, Tom Hauser, to meet with Larsen at the hotel he was staying at in New Jersey while in the area for the appearance. We met up with Larsen and his agent Andrew Levy in the lobby of the New Jersey hotel for the photo shoot the morning of his autograph appearance.

Larsen put on a Spray Nine hat and jersey, held up a bottle of Spray Nine, and I snapped a few photos of him standing in front of a blank wall in the hotel lobby.

Upon returning to the office, Spray Nine graphic artist Dave Wojeski took one of my photos, added a Yankee Stadium backdrop and created the ad that told the history of Larsen’s historic feat and the creation of Spray Nine Multi-Purpose Cleaner back in 1956. A few weeks later, the ad was in the New York Yankees 2006 yearbook when it was released at their April 11 home opener against the Kansas City Royals. The yearbook cover features players; Alex Rodriguez, Jorge Posada, Derek Jeter, Robinson Cano, Bernie Williams, Gary Sheffield, Hideki Matsui, Johnny Damon and Jason Giambi. And tucked away on page 275 is the half-page ad featuring Larsen holding a bottle of Spray Nine multi-purpose cleaner.

On Saturday, Nov. 4, 2006, “The Perfect Evening” event took place at the New York City Marriott Marquis in Times Square. The $400 per plate dinner was the official 50th anniversary celebration of the historic Perfect Game that honored Larsen and his catcher Yogi Berra. The event also featured New York Yankee play-by-play announcer Michael Kay as the master of ceremonies and dozens of former baseball legends in attendance.

In addition, five other players who had pitched Perfect Games were on hand. Included were Len Barker, Mike Witt, Dennis Martinez, Tom Browning and David Cone.

Each guest received a complimentary bottle of Spray Nine Cleaner, as well a commemorative Perfect Game Ball signed by Larsen, and a statue of Larsen throwing the final pitch of his historic game. John Coakley and I attended as guests of Larsen’s, and the pitching duo was reunited for the first time since their 1949 season in Springfield, Ill.

Larsen passed away Wednesday, Jan. 1 at the age of 90. While a total of 23 Perfect Games have now been thrown in Major League history, he remains the only player to throw a Perfect Game in the World Series. The hat and jersey Larsen wore, as well as the bottle of Spray Nine he held for the 2006 New York Yankee Yearbook ad are on display at the Fulton County Museum and documents Fulton County’s brush with baseball perfection. The museum is located at 237 Kingsboro Ave. in Gloversville.

Mike Hauser is the founder of the Fulton County Baseball & Sports Hall of Fame in Gloversville. If you have story ideas, old articles/photos or would like to nominate someone for the HOF, he can be reached through the organizations website at www.fchof.com, email; mhauser@frontiernet.net or call 518-725-5565.