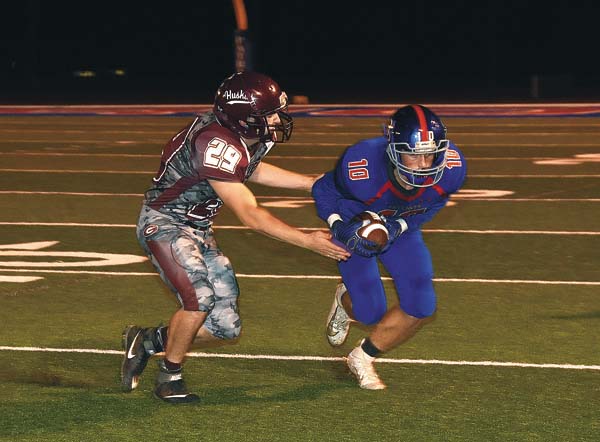 Broadalbin-Perth's Jackson Sassanella (10) makes a catch as Gloversville's Alexander Cook (29) closes on the play during a Class A/B crossover game Oct. 30 at Patriot Field at Broadalbin-Perth High School. Sassanella recently was named a first-team Class B North Division all-star at tight end. (The Leader-Herald/James A. Ellis)

Several Johnstown and Broadalbin-Perth football players were among those named to the Section II Class B North Division all-star team.

CANAJOHARIE — Canajoharie-Fort Plain won eight of 12 weight classes on its way to a 54-16 victory over ...

CANAJOHARIE — Canajoharie-Fort Plain won seven of 10 events on its way to a 74-53 victory over Hudson Falls-South ...

DOLGEVILLE — The Dolgeville volleyball team improved its overall record to 11-2 and 5-0 in the Center State ...