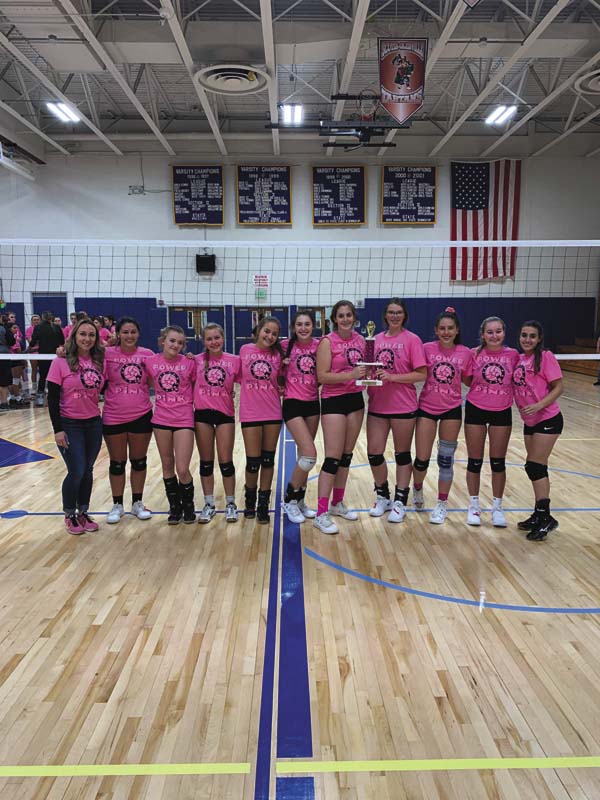 Broadalbin-Perth, Fonda-Fultonville and Galway will all be playing for titles for the second straight year.

The top-seeded Lady Patriots will look to defend their Class B title when they face second-seeded Holy Names on Saturday at 3 p.m. This year marks the seventh straight year that B-P will be playing for a sectional title.

Both Fonda-Fultonville and Galway lost in last year’s finals. 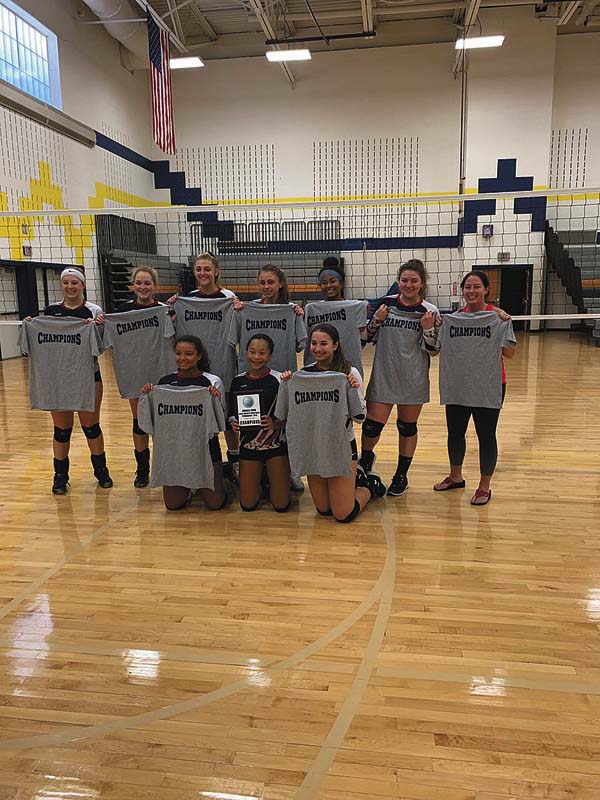 The Broadalbin-Perth volleyball team will be playing for the Section II championship Saturday at Saratoga Springs High School. The Lady Patriots will face Holy Names for the Class B title.

For the second straight year, the Fonda-Fultonville volleyball team will play for the Class C crown.

The third-seeded Lady Braves are looking for a different result this time around after losing, 3-1, to Voorheesville in last year’s title match. 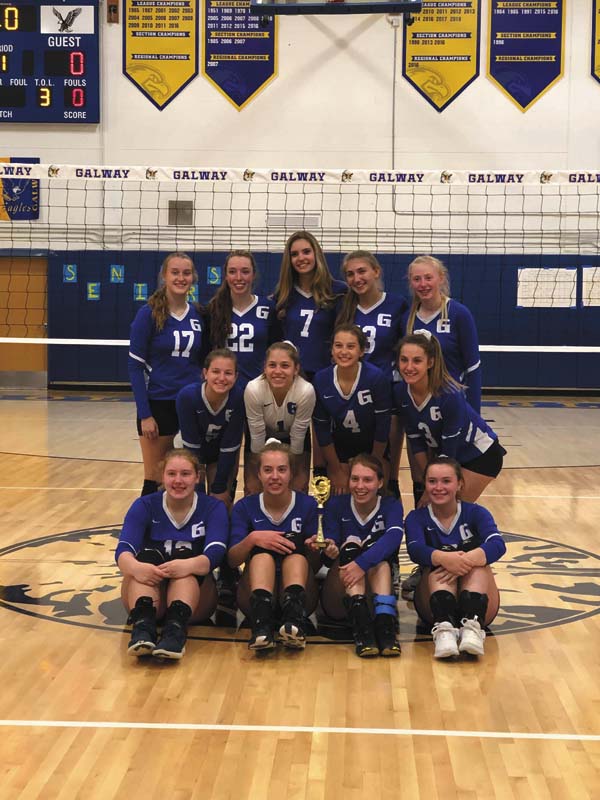 The Galway volleyball team will be playing for a Section II championship today at Saratoga Springs High School. The Golden Eagles will play Argyle for the Class D title today.

“I think it will help the girls who have experienced that level of play. There are some new girls who have done a great job stepping up and I think the older or more experienced girls will take them under their wing for the title game this year,” Fonda-Fultonville coach Ashleigh Griswold said. “Nothing can quite compare an athlete for the day with nerves and excitement at peak levels but I think it will help them feel more comfortable for sure.”

FFCS will be seeking its first sectional volleyball title in its third trip after also losing to Broadalbin-Perth in the 2015 Class C title match.

“This will only be the third time in program history that Fonda has reached the championship game. It is a great accomplishment as a school to be at this event, but an even greater achievement having been there just last year,” Griswold said. “These girls have a sense of pride for the program and the sport they love. The school has also been tremendously supportive from administration down to other student athletes. If nothing else, this will be an exciting match that so many are looking forward to.”

The Lady Braves reached the finals with 3-0 wins over 11th-seeded Canajoharie-Fort Plain in the quarterfinals last Friday and second-seeded Tamarac in the semifinals Tuesday.

In its quarterfinal win over Canajoharie-Fort Plain, Fonda-Fultonville got 12 digs, 11 kills and an ace from Whitcavitch, while Bagnardi had 20 assists, six digs, two aces and two kills. Krystal McSpirit had eight kills and four blocks for the Lady Braves, Zilles had eight digs and five aces, and Dineen added six aces, four digs and two kills.

“The keys to success will be playing the game they know how to play,” Griswold said. “When you take all the pressure off, the girls’ have great movement, solid serves, good serve receives, killer hits, and coverage like the best of them. As long as they stay energetic, confident, and calm, they’ll do great.”

In its semifinal match, top-seeded Lake George defeated fourth-seeded Voorheesville, 3-1, rallying to win the finals three sets after dropping the first set The Warriors won by scores of 21-25, 25-7, 25-9 and 25-10.

Lake George was left out of the Section II Class D Tournament last year when it was deemed ineligible after exceeding the number of matches allowed during the regular season. The Warriors last won a sectional title in 2008, claiming the Class D title.

Lake George last played for a Class C title in 2017, losing to Voorheesville in the championship match.

“We got to see them play against Voorheesville and a little bit at another tournament this year. They are not new to this level of competition and I think their comfortability with it is an asset,” Griswold said. “They are a strong team with a heavy net presence and service. We will have to step up in areas to match them and I hope we will do the same for them.”

The winner advances to the regional semifinals to face Section X champion Canton at Gloversville High School on Thursday at 7:30 p.m.

For the third time in the past four years, Galway will play for a sectional title.

The Golden Eagles won the Class C crown in 2016 and lost in last year’s Class D final to Mayfield.

“I am hoping it will help and we can learn from our mistakes last year in that match,” Galway coach Mike Glenn said. “The ones that were there last year, will have a better understanding and sense of the game, but we have a number of new players this year, so I’m hoping the older ones talk to the younger ones about the experience.”

Galway, which last won the Class D title in 2014, advanced to the finals with 3-0 wins over eighth-seeded Germantown and fourth-seeded Hartford.

“I think it’s huge for our program as it’ll be the first time ever for them to be there back-to-back I believe,” Glenn said. “It’s my fourth year here and being in the finals three of the four years has been huge for us as it’s drawing more interest from the community and the younger student athletes wanting to play the sport which helps as we are trying to build the game and our program.”

In Tuesday’s semifinal match against Hartford at Stillwater High School, the Golden Eagles won by scores of 25-13, 25-14 and 25-13.

Argyle punched its ticket to the title match with a 3-1 victory over seventh-seeded Mayfield in the quarterfinals and a 3-0 win over third-seeded Maple Hill in the semifinals.

“They are a very good team. They have had a great season and have been one of the top D schools for a number of years, so they are consistent and have the experience.  The are well-rounded this year,” Glenn said. “They serve very aggressively, and hit very well. They also have a great setter that can do many things with the ball that we normally don’t see.”

Argyle won the Class D title in 2016 and 2017 before losing to Mayfield in the semifinals last year.

“If we are going to be successful in the match, there are a few major things. First, we will need to continue to play consistent like we have all year,” Glenn said. “We will have to pass very well as that will be the biggest key. We also have to block well as we have some height on our team and blocking can change the game in a teams favor.”

For the seventh straight year, Broadalbin-Perth will be playing for a Section II title.

The top-seeded Lady Patriots won the Class B title in 2018 over Hudson Falls, which had defeated B-P in the 2017 and 2016 Class B finals.

“I think that having experience is definitely beneficial. It was a great learning experience,” Broadalbin-Perth coach Renee Gillen said. “The keys to success for us will be playing a tough offense and defense.”

Broadalbin-Perth has posted a pair of 3-0 wins on its way to this year’s Class B finals, sweeping eighth-seeded Johnstown in the quarterfinals and postseason nemesis Hudson Falls, the No. 4 seed, in the semifinals.

Second-seeded Holy Names had a rougher road to the championship match.

Holy Names will be making its first appearance in the sectional finals.

“I know that they are having a great season. We had an opportunity to play them in our home tournament and it was a great match,” Gillen said.

“We are working on building a program at B-P from the ground up. I was very lucky to walk into a program that already had a good foundation, thanks to my predecessor,” Gillen said. “It’s very beneficial for our program to continue having success as it inspires our younger athletes to reach their potential.”

The winner will face Section X champion Ogdensburg Free Academy in the regional semifinals at Gloversville High School on Thursday at 5:30 p.m. B-P defeated Ogdensburg, 3-0, in last year’s regional final at Massena High School to advance to the state semifinals.