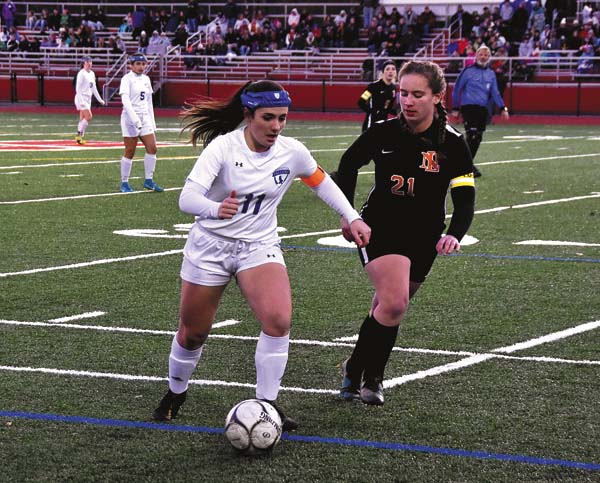 Northville's Grace Forsey (11) is tracked by New Lebanon's Amelia McDonald (21) during the first half of the Section II Class D championship match Wednesday at Mechanicville High School. (The Leader-Herald/James A. Ellis)

MECHANICVILLE — As a group of Northville residents stood anxiously waiting for the girls soccer team to return home, one parent remarked about how he experienced a local tradition when the boys soccer team returned home after winning the 1995 state championship and now his daughter was also going to enjoy experience.

The Lady Falcons were met at the bridge and escorted through the village by fire trucks with sirens blaring and lights flashing after defeating top-seeded New Lebanon 3-1 to claim their second Section II Class D championship in three years Wednesday at Mechanicville High School.

“We have been talking about it all day,” Senior captain Brytney Moore said. “The whole town is going to be out there. We are so excited because not getting it last year was so devastating, especially in overtime on PKs. We knew that this year we were going to have to fight more than we have before especially with how many seniors we have. I have been on the team for five years and I knew this was the chance and we had to do it because there would be no more opportunities.”

The Lady Falcons took control of the match at the opening kick off and immediately put pressure on the New Lebanon defense.

The Tigers handled the pressure until the 16th minute when Madison Whittaker sent a high cross into the middle that Grace Forsey ran on to and finished for a 1-0 lead. 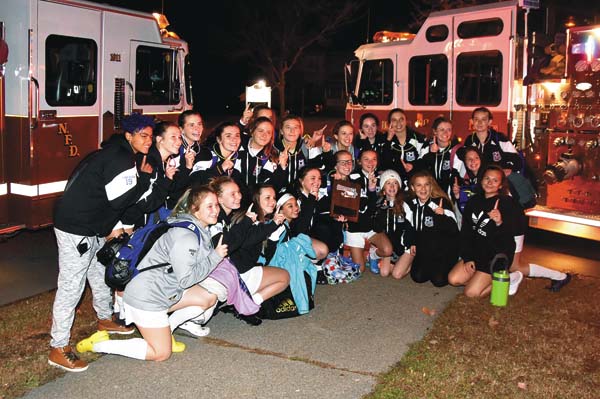 However, Northville was not ready to sit back.

“We have been in that situation before,” Moore said. “The last time we won sectionals we were down at the half and fought back to win. We knew that being up by one goal would mean that we were not guaranteed the win, so we weren’t done.”

It too just under two minutes for the Lady Falcons to extend their lead.

Kaytelenn Van Heusen received a ball on the right side and dribbled into the corner where the ball was knocked away by a defender. Van Heusen hustled, slid to keep the ball from going over the end line, putting a centering pass to the near post. Moore took advantage of hesitation by the Tigers defense to race in and slot the ball inside the post for a 2-0 lead.

The Tigers pushed to get a goal before the break but were denied the opportunity when goalkeeper Emily Shepard punched a direct kick by Emily Schafer over the crossbar to keep the score 2-0 at the break. 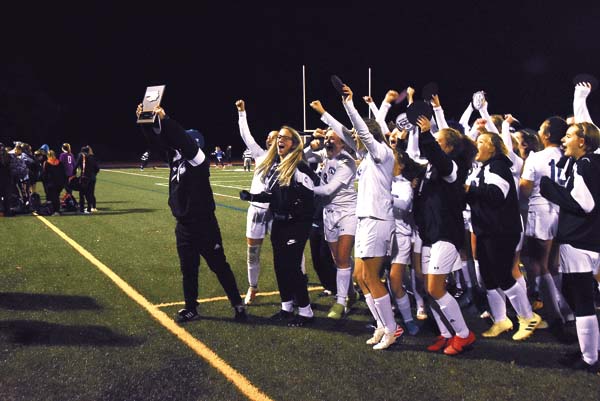 Northville showed no sign of let down after the break as Moore put a shot on net that Tigers’ goalkeeper Brianna Shuhart handled just 25 seconds after the second-half kickoff.

New Lebanon got on the board when Schafer connected on a long-range shot that skimmed under the crossbar and into the back of the net to make it a 2-1 game with 34:05 left to play.

“We had the early 2-0 lead and that was pretty comfortable and then they scored, and it became a game,” Northville coach Doug Hammons said.

The intensity of the match picked up with the Lady Falcons creating chances but could not finish.

The Tigers had a golden opportunity with just over 16 minutes left in regulation when they were awarded a direct kick just outside the penalty area. Schafer hit the shot, but it sailed high over the goal, keeping it a one-goal match.

Moore worked for her second goal and looked poised to get it when she broke in 1-on-1 with Shuhart who stonewalled Moore for the save.

The Lady Falcons kept working and it paid off with 11:29 left to play when Moore put away a cross from Van Heusen to push the lead to 3-1.

“We just had to find that next goal and when we did it just deflated them,” coach Hammons said.

Northville remained in control of the match over the final minutes to lock up their second title in three years.

For the match, Northville outshot New Lebanon 15-7 and held a 6-2 edge in corner kicks.

Shuhart collected 11 saves in goal for the Tigers, while Shepard made six stops for Northville.

“This year, our team has been the closest it has ever been,” Moore said. “It is like a family and there is nothing like getting this with your family. It is the happiest feeling in the whole world.”

“We are game-by-game,” coach Hammons said. “The expectation is high, obviously, I know we can be there and punch our ticket [to the state final four]. It is preparation now and we have to travel 2 1/2 hours to Goshen to play Mount Academy. It is their first year with a girls’ team, so it is hard to say what team we are playing. These girls are ready, and their heads are in it to win it.”