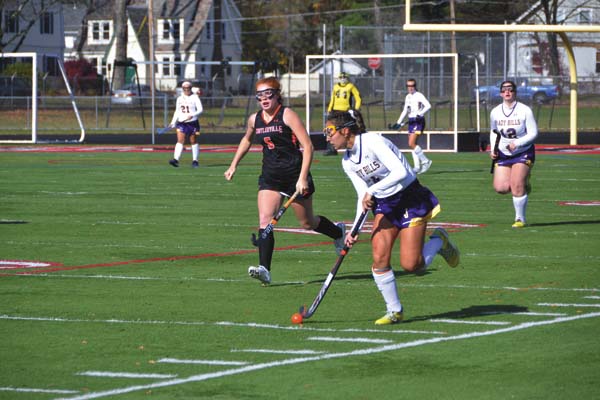 GLOVERSVILLE — After winning its first sectional title since 2011, the Johnstown field hockey team now turns its attention to regional play.

“I think having played two non-league games against out of Section teams this year, Red Hook from Section IX and Holland Patent from Section III, will help the girls at this stage,” Johnstown coach Christine Krempa said. “We purposely scheduled those games to make us stronger down the long stretch and to get the girls comfortable with the unknown.”

On Sunday, the Lady Bills rolled to a 7-0 victory over Schuylerville in the Section II Class C title contest at Putt LaMay Memorial Field at Glens Falls High School.

Ringer pushed her career total to 105 goals with her four-goal effort to help Johnstown to its 15th sectional title in program history.

After finishing last season 18-1 and outscoring its opposition 114-12, the Lady Bills have again been dominant this season.

Johnstown is a perfect 17-0 and has outscored its foes by a 83-7 margin, goalie Abby VanValkenburgh and her defense have combined for nine shutouts this season.

The Blue Devils, who have won 10 of their last 11 games, have outscored the opposition by a 90-22 margin this season. Camden also has nine shutouts this season, including three straight in postseason play.

“Any team we face will come ready to play hard,” Krempa said. “Our key to success against any team we face will be to play Johnstown field hockey. We are looking to control the tempo and pace of the game from the first whistle while executing a clean passing game.”

Camden advanced to regional play with a 5-0 victory over Port Byron/Union Springs in the Section III Class C-D playoff game at Vernon-Verona Sherrill High School on Sunday. Chloe Hite and Emily Walker each had two goals for the Blue Devils, while Mackenzie Mix added a goal and an assist. Goalie Kendra Igoe made just one save to post the shutout in goal.

In the Section III Class C championship game, Camden notched a 4-0 victory over Clinton, getting a goal and two assists from Mix, while Walker had a goal and an assist. Jaiden Scott and Paige Halbritter also scored for the Blue Devils.

Camden opened its postseason with a 3-0 victory over Cazenovia in the Section II Class C semifinals. Skye Wall scored twice for the Blue Devils, while Mix had a goal and an assist. Delainey Hebble added two assists for Camden, which advanced to the state tournament for the third straight season.

Having played at Gloversville as part of its league schedule, Johnstown is hoping for a decided home-field advantage today.

“I think playing in Gloversville will be an advantage for us,” Krempa said. “We are familiar with the field having played on it the past few years and we are hoping the atmosphere will essentially be like a home game for us.”

The winner of today’s contest moves on to face Section IV champion Greene on Saturday at Vestal High School at 11 a.m. In its last trip to regionals in 2011, Johnstown lost to Section IV’s Maine-Endwell, 3-1, at Greene High School