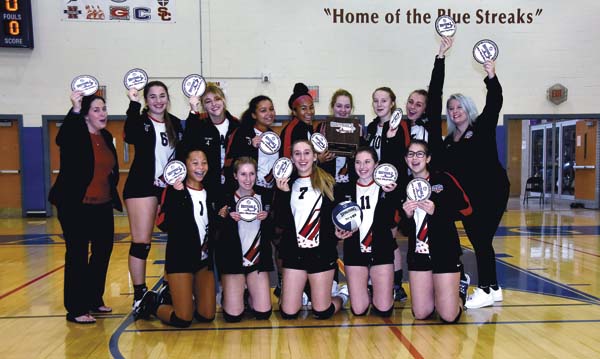 The Broadalbin-Perth girls volleyball team celebrates after sweeping the Academy of the Holy Names 3-0 to win its second-straight Section II Class C championship. (The Leader-Herald/James A. Ellis)

SARATOGA SPRINGS – After a fourth-place finish at the 2018 Class B state championships, the Broadalbin-Perth girls volleyball team took its first step toward a return trip to the tournament.

The top-seeded Lady Patriots claimed their second-straight Section II Class B championship, sweeping past second-seeded Academy of the Holy Names on game scores of 25-11, 30-28, 25-17 Saturday at Saratoga Springs High School.

“It is surreal,” Broadalbin-Perth coach Renee Gillen said. “We lost one starter from last year. Then to win it back to back is surreal and is going to help me build this program. This is the seventh year in a row being here and I was blessed to have a great foundation to build on.”

“It is like a home court advantage for us,” Coach Gillen said. “Last year we went to Massina and that turned out to be a three or four hour trip. It is hard to shake a long trip like that off.”

Holy Names broke out to an early lead but could not pull away from the Lady Patriots. Pushing the score to 24-21, Holy Names looked to close out the game when Coach Gillen called a time out.

“I said to them we were down before against this team and came back to beat them,” she said. “If nothing else we are going to get some momentum back on our side heading into the next game and we got control again.”

Broadalbin-Perth came out of the huddle and immediately got the side-out it needed.

With Sydney Rogers serving the Lady Patriots fought back and pulled even on a kill from Eliana Fraser.

The teams locked in a battle, swapping leads and tying the game six times before Sydney Rogers got a kill and a return by Holy Names failed to clear the net, giving Broadalbin-Perth a 30-28 victory and a 2-0 advantage.

“That is exactly how it was in our tournament,” Coach Gillen said. “I specifically put Holy Names in our bracket there so we both could see each other. It was 31-29 in that one, so we knew coming in that was a potential problem. They are a good team with a good blocker who is tough to get around. That is pretty much what we worked on all week was getting around [Alexis Graziano] the tall girl.”

The Lady Patriots kept the momentum going behind a solid third-game performance by Sophia Rogers to defeat Holy Names 25-17 to lock up their second-straight and fourth title in the last six seasons.

“Sophia was a little shaky that first game but I knew when she got that one contact with the ball it was going to be good night,” Coach Gillen said.