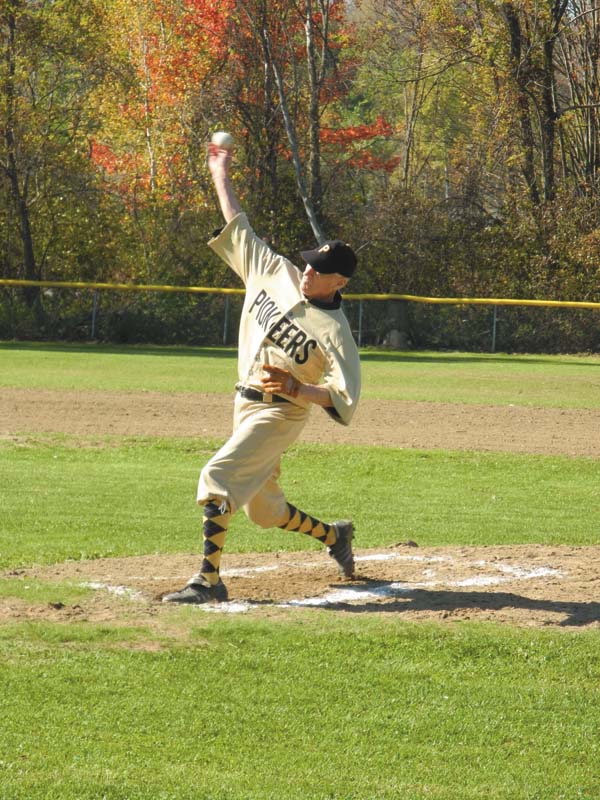 Jim Bouton throws to the plate during a vintage game at Parkhurst Field in Gloversville. (The Leader-Herald)

This summer, both the sports and literary worlds lost a legend with the passing of former pitching great James Allen (Jim) Bouton.

Bouton was drafted by the New York Yankees in 1959 and spent part of his first season in the minor leagues as a teammate of Fulton County Baseball Hall of Famer Babe Baldwin with the Class D Auburn Yankees.

Bouton would make it to the Major Leagues with the New York Yankees in 1962 and quickly became a pitching phenomenon. He won 21 games in 1963,18 games in 1964 and was an all-star in 1963. He also pitched in one game in the 1963 World Series against the Los Angeles Dodgers.

It was a memorable pitching duel against Hall of Famer Don Drysdale in front of 55,912 fans at Dodger Stadium.

The 24-year-old Bouton gave up only four hits and one run over seven innings. 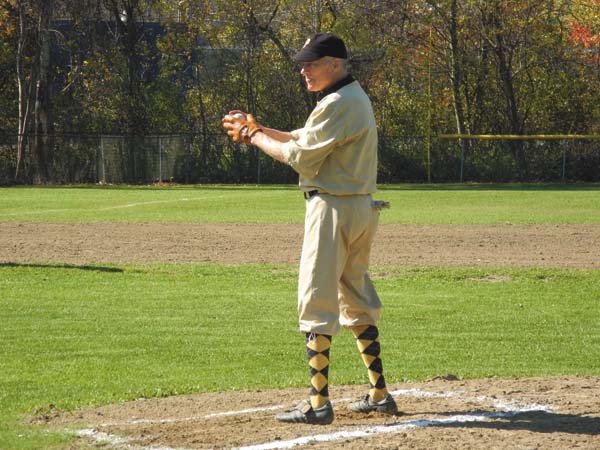 Jim Bouton takes the mound during an Oct. 13, 2013, vintage baseball game at Parkhurst Field in Gloversville. (The Leader-Herald)

However, Drysdale threw a complete game no-hitter to get the win as the Dodgers won the series in a four-game sweep over the Yankees.

The Yankees were back the World Series in 1964 against St. Louis Cardinals. Bouton would pitch in two games, winning both.

In Game 3 he was entangled in another pitching duel that took the game to the ninth inning tied at 1-1.

Mickey Mantle would end the game with a walk-off home run to give Bouton his first World Series win. 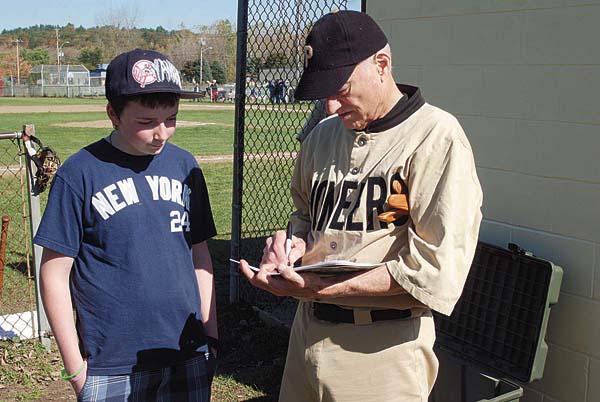 Jim Bouton signs an autograph for Gage Mersinger during an Oct. 13, 2013, vintage baseball game at Parkhurst Field in Gloversville. (The Leader-Herald)

Game 6 saw Bouton back on the mound with the Yankees down three games to two and on the brink of elimination.

Bouton threw another pitching gem and gave up just three runs and was helped out by back-to-back home runs by Roger Maris and Mickey Mantle and a third by Joe Pepitone.

The Yankees won the game, sending the series to a seventh game, in which they eventually lost to Bob Gibson.

Bouton would pitch for the Yankees through the 1968 season. He spent the 1969 season with the Seattle Pilots expansion club and then retired halfway through the 1970 season.

He made a comeback in 1975, pitching the next three seasons in the minor leagues. He would pitch in five more Major League games with Ted Turner’s Atlanta Braves in 1978. 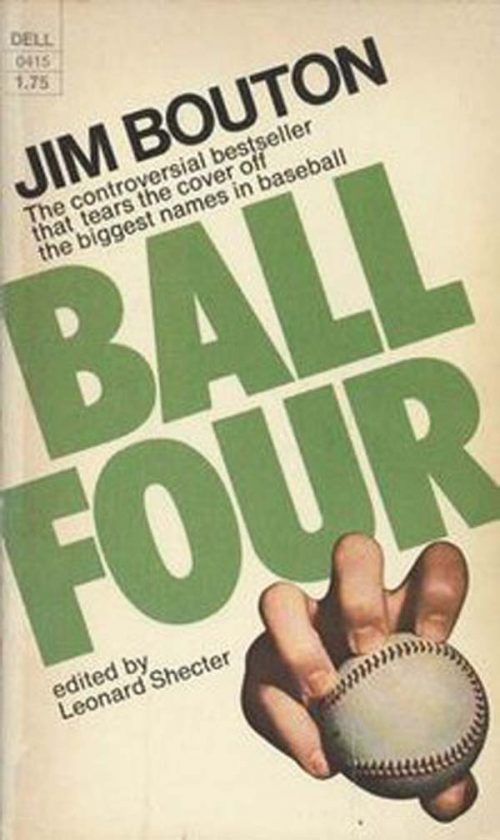 During his break from the game from 1971 through 1975, he took on roles with New York television stations as a sports anchor, while dabbling as an actor and public speaker.

His public speaking was an offshoot of a famous book he authored and released in 1970 called ‘Ball Four.’

Ball Four’ was a diary of his 1969 season with the Seattle Pilots, along with what life was like as a baseball player.

The book was considered controversial at the time, as it was a tell-all accounting of the inside stories of the professional sports world.

Major League Baseball Commissioner Bowie Kuhn attempted to condemn the book as bad for baseball and down played what Bouton wrote as fictional. 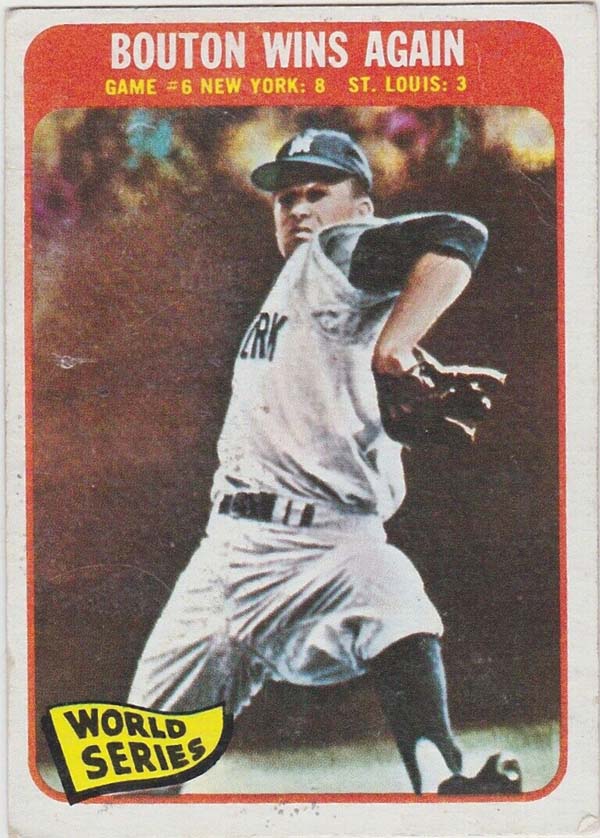 Jim Bouton's effort in Game 3 of the 1964 World Series is pictured on a 1965 Topps baseball card. (Photo courtesy of Fulton County Baseball & Sports Hall of Fame)

However, Bouton stood by his assertion that all the stories were true, and the book would go on to sell millions of copies worldwide. Not only did the book allow fans a different look at the game and the players who played it, but it also revolutionized sports journalism and literature.

The book made the New York Public Library’s 1996 list of ‘Books of the Century’ and it was also listed in Time Magazines 100 greatest non-fiction books of all time.

In addition to being a best-selling author, his post playing career also included creating a tobacco alternative gum product that looks like chewing tobacco called ‘Big League Chew.’ He came up with the idea during his comeback in 1977 while pitching for the Portland Mavericks. While watching the younger players on the team chewing tobacco, he commented to fellow pitcher Rob Nelson that it was a shame they did not make a gum that looked like chewing tobacco. The two pitchers developed the product and introduced it to the baseball world in 1980. It was an immediate hit and produced wholesale sales of $18 million dollars in the first 12 months on the market.

‘Big League Chew’ is still enjoyed today by players at all levels of the game and is considered to have saved many from the perils of chewing tobacco.

It was Bouton’s vision to renovate the park back to professional playing condition without any public funds. Politics impeded his efforts and out of frustration he penned another book called ‘Foul Ball’ which documented the hardships he encountered with the project.

While the Wahconah Park project frustrated him, it did bring him back into the game again as a player. The first fundraising initiative involved a Vintage Baseball Game held at the park in 2004 which drew more than 5,000 fans.

To add star power to the event, Bouton suited up and took care of the pitching duties. This led to him becoming a regular pitcher on a Vintage Baseball Club called the Pittsfield Hillies, which honored the Eastern League team that had played at Wahconah Park from 1919 to 1930.

The Hillies Vintage Team evolved into the Whately Pioneers Vintage Baseball Club around 2009 and traveled the East Coast for matches against other Vintage Clubs. Bouton continued to pitch three to four games per season for the Pioneers and helped to promote the Vintage Baseball Federation.

The federation helped form vintage clubs and leagues throughout the world and also codified the rules and equipment used to closely emulate the games as they were played in the 1800′.

In 2012, Bouton suffered a stroke that damaged his memory and speaking.

On Oct. 13, 2013, at the age of 74, he was back on the mound at Parkhurst Field in Gloversville New York as a pitcher for the Whately Pioneers. It was a Vintage Game, played by the Major League Baseball rules of 1886 against the local A., J. & G’s Vintage Baseball Team, managed by former Major League Manager Jack McKeon.

Bouton pitched the first few innings of the game utilizing the knuckleball he had developed during his Major League career, not allowing any runs.

He was impressed with the history and commented, “this place reminds me of Wahconah, make sure you save it.”

He then proceeded to give myself and Parkhurst Field Foundation President David Karpinski advice on the park’s renovation plans and instilled many ideas to assist with those efforts. The game at Parkhurst Field would turn out to be the last game that Bouton would play in as a Whately Pioneer.

His very last baseball engagement was an appearance at Yankee Stadium for Old Timers Day in June of 2018.

The Yankees gave him 56 tickets (to match his uniform number) and he received a standing ovation from the crowd of 46,400 fans in attendance.

Bouton passed away on July 10, 2019, at his home under hospice care for cerebral amyloid angiopathy at the age of 80.

A special ‘thank you’ to Ken Hartwright and Ricky Fluerent of the Whately Pioneers Vintage Baseball Club for their stories about Bouton and their input into writing this story.