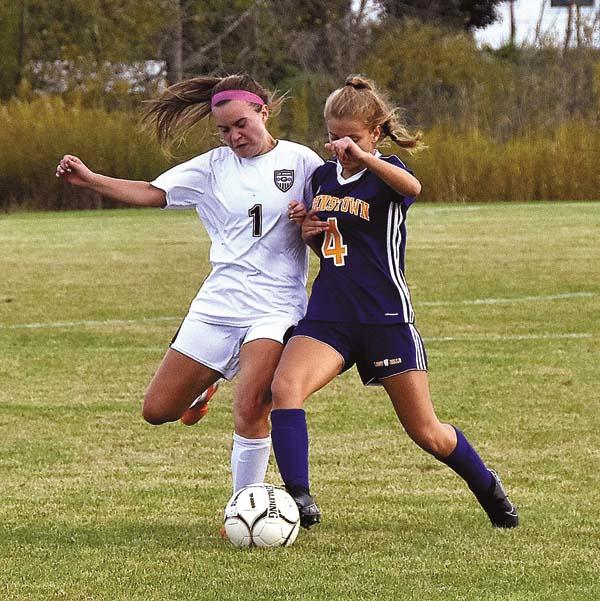 Gloversville's Maddie Hickok (1) and Johnstown's Mary Austin (4) battle for control of the ball during Wednesday's Foothills Council match at Johnstown High School. (The Leader-Herald/James A. Ellis)

JOHNSTOWN — After dropping a 4-1 decision to Gloversville on Sept. 14, the Johnstown girls’ soccer team has been on a roll.

The Lady Bills recovered to put together a six-game unbeaten streak of five wins and a draw.

Wednesday, the Lady Bills avenged their loss to Gloversville to extend their unbeaten streak to seven games with a 3-1 Foothills Council victory over the Lady Dragons at Johnstown High School.

“For such a young team, they have really clicked,” Johnstown coach Erica Fitzpatrick said. “They know positioning, but instead of taking 25 shots and making three we need to increase that shot percentage.”

During the opening half of Wednesday’s match, the Johnstown front line kept the Lady Dragons pinned in a defensive posture for the majority of the opening 40 minutes with Gloversville breaking out for a few counter-attack runs. 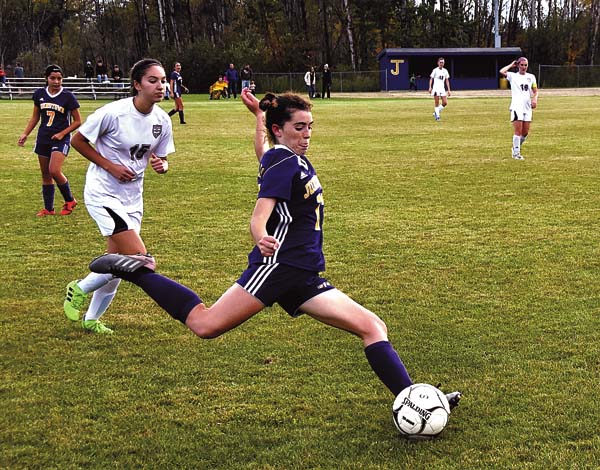 Gloversville's Melia Stoller (15) closes on the play as Johnstown's Madison Delgado (17) prepares to drive a long pass toward goal during Wednesday's Foothills Council match at Johnstown High School. (The Leader-Herald/James A. Ellis)

Ally Queeney, Mary Austin and Grace Giarrizzo worked combinations for the Lady Bills that were challenged by the Gloversville backline of Aleccea Jones, Brooke Dutcher, Maddie Hickok and Tenecia Beckford to give goalkeeper Meredith Dennie clean looks at the attempts.

Gloversville opened second half with a quick-strike attack off the kick-off with Taylor Mee breaking down the sideline and Melia Stoller putting a shot on goal that narrowly missed its mark 20 seconds into the half.

The Lady Bills recovered and began to build the passing game they established in the opening half only to again have Dennie come up with the save on the Lady Bills’ attempts.

The Lady Dragons broke the scoreless tie with 25:58 left in the match when Katie Callen won the ball in midfield and threaded a pass through the drawn-up Johnstown defense. Mee ran onto the ball and raced in one-on-one with Johnstown goalkeeper Hope Buboltz and finished the play for a 1-0 lead.

Johnstown went back to work with its passing game and finally broke through with 19:20 left to play when Austin gathered a loose ball in front of the net off a corner kick from Mango Delgado and poked it through the crowd of players and into the net to knot the score at one apiece. 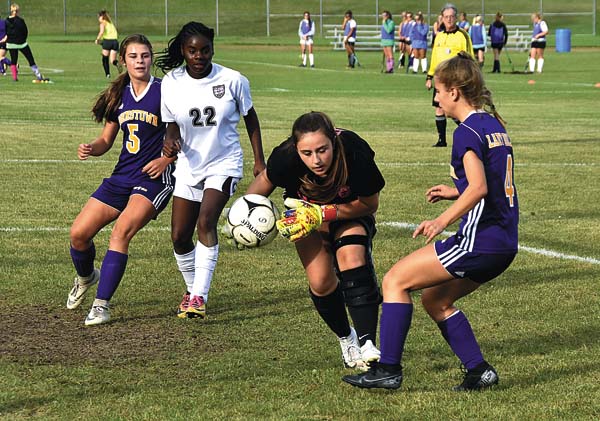 Gloversville goalkeeper Meredith Dennie scoops up the ball in front of Johnstown's Mary Austin (4) as the Lady Bills' Grace Giarrizzo (5) and the Lady Dragons' Tenecia Beckford (22) close in on the play during Foothills Council action Wednesday at Johnstown High School. (The Leader-Herald/James A. Ellis)

The Lady Bills kept the pressure on and got the go ahead goal off a 30-yard direct kick from Queeney that Dennie initially stopped but could not control. Jaidyn Chest was on a run toward goal and put the rebound into the back of the net for a 2-1 Johnstown lead with 15:15 left to play.

The battle in the midfield tightened with the momentum swinging back and forth before the Lady Bills got an insurance goal from Queeney with 6:44 left on the clock to lock up the 3-1 Foothills Council victory.

“We knew going in that they play hard,” Gloversville coach Mike Hallenbeck said. “If we wanted to compete and get another win, we knew we had to match their intensity. They outworked us in the first half. We got that goal in the second half then seemed to shoot ourselves in the foot.”

As the teams enter the final week of the regular season, both coaches are looking to build momentum for possible postseason runs. 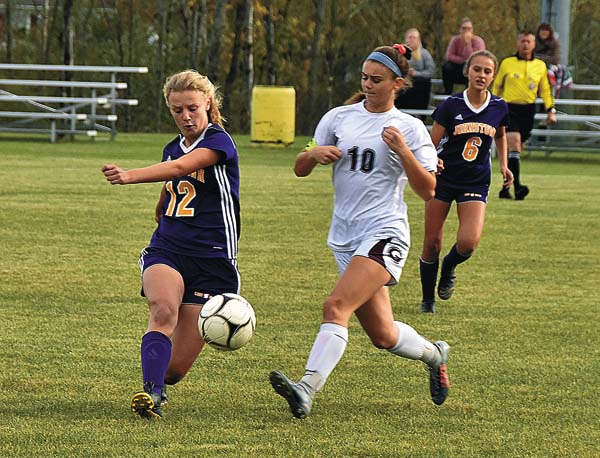 Johnstown's Jaidyn Chest (6) looks on as the Lady Bills' Abby Vandewalker (12) passes the ball as Gloversville's Michaela Ponticello (10) closes on the play during Foothills Council action Wednesday at Johnstown High School. (The Leader-Herald/James A. Ellis)

“We have been on a little skid here,” coach Hallenbeck said. “We need to find a way to come together and play better soccer. I don’t think we are playing up to our potential.”

Gloversville (7-6-1 overall, 5-5-1 Foothills) will close out its regular season with home matches against Scotia-Glenville on Tuesday and Broadalbin-Perth next Thursday.

Johnstown (6-4-3 overall, 5-4-1 Foothills) will host Schuylerville at 4:30 p.m. Friday before traveling to play Broadalbin-Perth on Tuesday and closing out their regular season under the lights at Johnstown High School on Oct. 18 against Amsterdam.

“I am very pleased with how we are playing and believe we will make a good run in sectionals,” coach Fitzpatrick said. “We are tight with teams like Scotia. They are unbeaten in the Foothills South and we played them even. We are in every single game.”