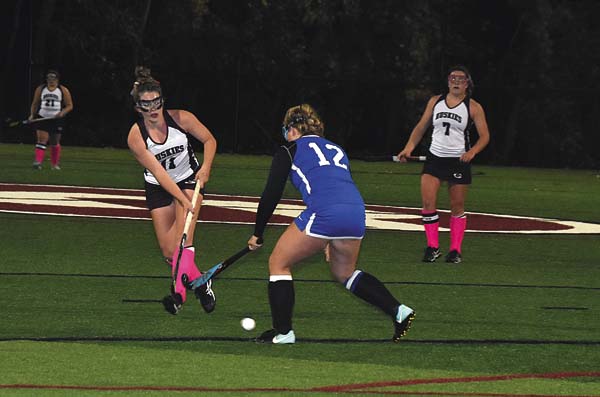 GLOVERSVILLE — Field hockey player Jordan DeMagistris was mentioned along with her mother Sheri as people the Gloversville Huskies were playing in honor of during their Pink Out game against Ichabod Crane.

Jordan, who was diagnosed with Wilms Tumor on her kidney at 18 months and has been undergoing treatment since, scored a goal and her sister Sidney scored twice in the game as the Huskies recorded a 5-0 victory over Ichabod Crane on a chilly Saturday night at Gloversville High School.

Saturday’s victory was the second for the Huskies in their past three games.

“We had a great week this week,” Gloversville coach Amy Romeyn said. “Tonight, we played exceptionally well. A lot of short game passes and we were moving it to the outside. Sidney Demagistris had an outstanding game. Our wings, Rileigh Baldwin and Loghan Ovitt, were on point and right where they needed to be and Maddy Jones has done a great job at forward. I can’t say enough about our defense, Kristin Farley, Celia Meher and Maddy Smeallie keeping the ball out along with goalkeeper Kimi Hastings.”

Baldwin got the Huskies on the board five minutes into the match with out of a scramble in front of the goal.

Gloversville kept the pressure on and with 11:09 left in the opening half, Sidney DeMagistris pushed the ball through the Ichabod Crane defense to put the Huskies up 2-0.

Jordan DeMagistris connected for her goal off a penalty corner start from Baldwin with 6:02 left in the half to stake the Huskies to a 3-0 halftime advantage.

The Huskies broke through with 5:55 left to play when Sidney DeMagistris knocked home her second goal of the match for a 4-0 advantage.

Just over two minutes later Ovitt connected for a goal off a rebound to put the final score at 5-0.

For the match, Gloversville out shot the Riders 18-0 and held a 17-6 edge in penalty corners.

The Riders did hit the back of the cage late in the match, but had the goal waved off due to a shot violation.

“All in all, it was a team win,” Coach Romeyn said. “That is how we have won our last couple of games. We have been putting together some good games in the second half of the season.”

“We have Johnstown on Tuesday and that is a tough game,” Coach Romeyn said. “I feel if we can keep moving the ball and keep our game short you will see a different game than we had at Johnstown the first time [7-0 loss]. We are on a momentum roll and the girls are playing with confidence.”