Griffin will return to Mohawks for 12th season 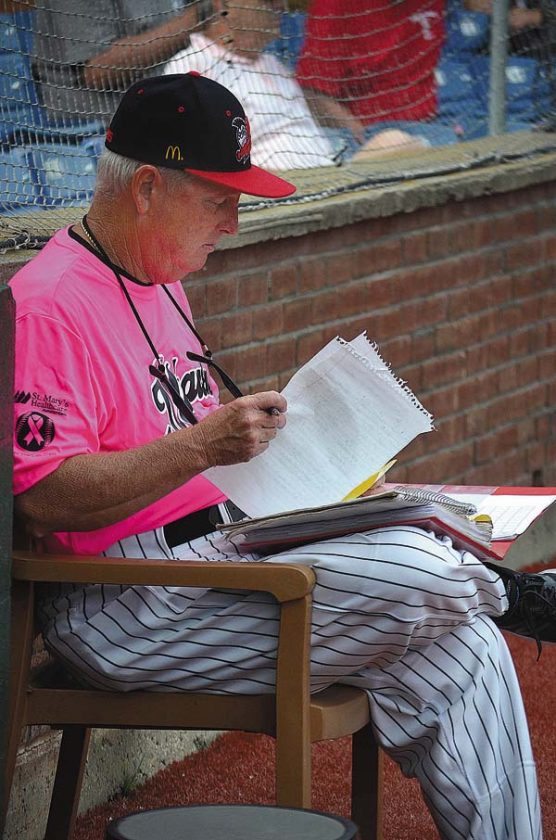 Amsterdam Mohawks coach Keith Griffin goes over his notes and scouting reports before the start of a the game against the Saugerties Stallions on July 22, 2017, at Rao Family Stadium at Shuttleworth Park in Amsterdam. Griffin will return for his 12th season as head coach in 2020. (The Leader-Herald/James A. Ellis)

AMSTERDAM — Keith Griffin will return to the Amsterdam Mohawks in 2020 for a 12th season as the team’s head coach.

Griffin is the franchise’s all-time wins leader, having led the Mohawks to a 404-162 record between the regular season and playoffs since taking over as head coach in 2009.

In 2019, Griffin led the Mohawks to a Perfect Game Collegiate Baseball League East Division championship and a PGCBL Championship. Amsterdam swept Adirondack in the championship series.

A native of Alabama who now resides in Pensacola, Fla., the 63-year-old Griffin has won more than 1,000 games as a head coach in a career that spans nearly 40 years. He served as head coach at Pine Forest High School in Pensacola from 1980 to 1990, and after serving as an assistant coach in the collegiate ranks for seven seasons he spent 13 seasons as a junior college head coach at both Jefferson Davis Community College and Okaloosa Walton College.

He won an NJCAA Division II national championship at Jefferson Davis in 1998 and coached nine future major leaguers during his time at Okaloosa Walton.

Since coming to the Mohawks, dozens of Griffin’s former Amsterdam players have gone on to play professional baseball. A total of 21 former Mohawks were taken in the 2019 Major League Baseball draft in June.