Gloversville gets past Johnstown in four sets 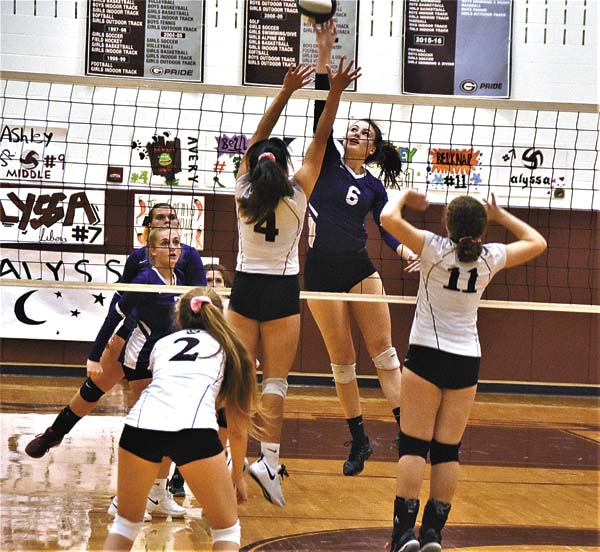 Johnstown's Amber Tesi (6) drives the ball over the net as Gloversville's Maddie Avery (4) challenges the shot during Foothills Council action Monday at Gloversville High School. (The Leader-Herald/James A. Ellis)

GLOVERSVILLE — The first two games of Monday’s match between Gloversville and Johnstown showed the ups and downs of volleyball.

In the opening game, Gloversville dominated play but could not back it up in the second game as the Lady Bills came back in strong game-winning fashion.

“They played with heart. Not so much the first game but after that they put everything out there,” Johnstown coach Holly Livingston said. “I have no problem with that. I hope we can finish out the season with that same heart and drive and they can get that intensity back and keep it.”

In the opening game of Monday’s match everything fell in favor of the Huskies as Johnstown struggled with communication and miss hits before finishing on the short end of the 25-13 score. 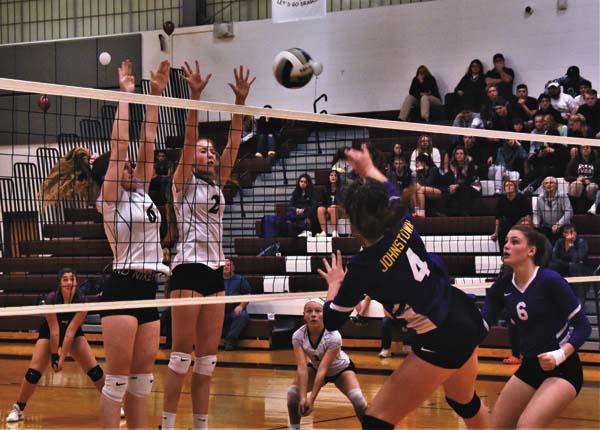 Gloversville's Hailee Thompson (2) and Alana Biasini, left, go up in an attempt to block a drive by Johnstown's Sadie Blowers (4) during Monday's Foothills Council match at Gloversville High School. (The Leader-Herald/James A. Ellis)

The momentum switched when the teams switched sides, with the Lady Bills finding their rhythm behind the strong net play of Amber Tesi and extended service runs by Brianna Subik to even the match with a 25-16 victory.

“I think in that second game Amber Tesi single-handedly beat us. We couldn’t stop her,” Gloversville coach Duane Hicks said. “We struggled to finish a play. The girls are pretty good at picking themselves up. Maddy [Avery] and Macey [Salvione] seem to take the lead more often than not and tell the girls we are better than this and we need to get out heads into this. I concentrate on the serves and I think we missed four in that second game alone.”

Gloversville opened the third game with a service run from Salvione for a 5-1 advantage, however, it did not take long for the Lady Bills to respond.

With the Huskies looking to slow Tesi, Sadie Blowers and Anika Byrnes stepped up to finish plays to bring the Lady Bills back to tie the game at eight apiece. Teianna Vetrano-Frasier kept the momentum going with a service run to move ahead 10-8.

Avery put a kill on the floor to earn the side out and then served the Huskies back in front 11-10.

Gloversville could not pull away as the teams swapped side outs with the game score tied five times.

The Huskies dug in behind a six-point service run from Hailee Thompson to take the lead and close out the game when Salvione put a close play at the net on the floor for the 25-19 victory.

After being tied at three apiece in the fourth game, the Huskies got some breathing room behind service runs from Alana Biasini and Avery to build a 9-4 advantage.

The intensity of the match continued to rise as both teams hit the floor for diving digs and extended volleys as the Lady Bills closed to within four points, 22-18 with an ace from Blowers.

Gloversville picked up a double-block on a drive at the net by Tesi from Thompson and Avery to turn the corner and finish the match with a tip over the net by Avery for the final point and a 25-19 victory to lock up the 3-1 Foothills Council win.

“We weren’t playing smart [in the second game] and weren’t putting the ball where it needed to be,” coach Hicks said. “We had practically zero offense and we couldn’t stop Amber. Then the third and fourth games they started picking where they were going to hit the ball as opposed to just hitting it.”

Avery had 18 kills and 17 digs for the Huskies, while Salvione had 11 kills and 21 digs and Aireana Muhlberger had 33 assists to go with 15 service points from Thompson.

Gloversville will close out its regular season on the road against Scotia-Glenville on Wednesday and Johnstown on Friday before entering the Mekeel Christian Academy Tournament on Saturday.

“That was a fun match with Johnstown, and we get to play them again on Friday,” coach Hicks said.