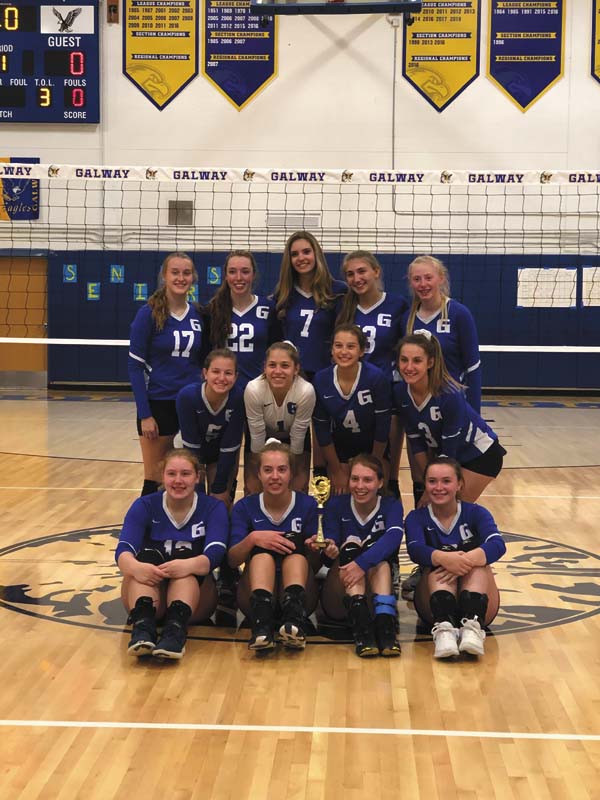 The Galway volleyball team poses with its trophy after winning the Folds of Honor Tournament on Saturday at Galway High School. (Photo submitted)

GALWAY — The Galway volleyball team won its Folds of Honor Tournament on Saturday.

Galway was led by Julia Reedy who piled up 53 kills, 32 digs and 5 blocks on the day. Hannah Hoffman had 50 service points and 84 assists for the Golden Eagles, Anna Gardner finished with 26 kills, 11 blocks and 47 service points, and Katy Kurtzner added 24 service points, 12 kills, 109 digs.

The Folds of Honor foundation helps families that lost loved ones serving, disabled veterans and military currently serving. Schools participating in the tournament collected food, candy, gum, board games, movies, cards, and anything soldiers can use. Players also wrote letters to soldiers serving overseas, and donations were collected and proceeds from the concession stands also will be going to the Folds of Honor.

“We were able collect boxes and boxes of items to go along with many donations and letters written. Hartford Central School went above and beyond with their drive at their school. Hartford coach Wendy Harrington got the whole school involved and walked into Galway carrying numerous boxes of items, a box of letters and monetary donations,” Galway coach Mike Glenn said. “I am speechless with how much Hartford did for our tournament. They went above and beyond anything I could imagine. This was the second year we have hosted a Folds of Honor tournament and it has been successful, but this year was an even greater success with all the teams help and the huge amount of time Hartford put into it. I can’t say enough great things about coach Harrington, her team and the entire Hartford school and community. This cause means a lot to me and small towns like us, so it’s so heartwarming to see how many people care. So many schools do things in honor of cancer, which we do too, but we have chosen to also do something for the military that protects and serves us.”