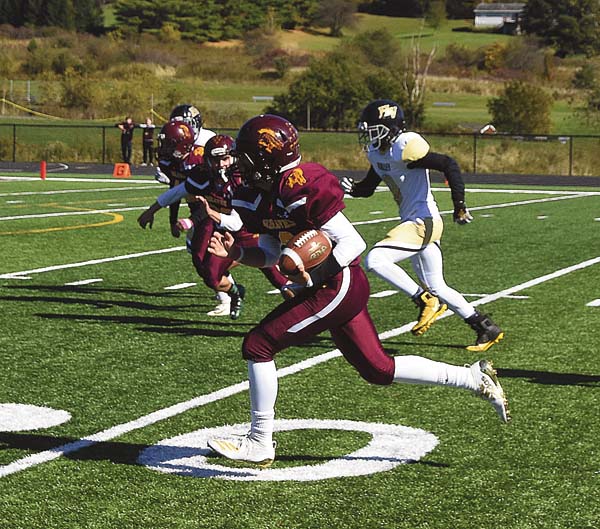 Fonda-Fultonville's DJ Greco heads for the end zone after picking a blocked punt out of the air during Saturday's game against Helderberg Valley at John G. Boshart Field at Fonda-Fultonville High School. (The Leader-Herald/james A. Ellis)

“We got a lot of guys involved today, our backups got a lot of experience,” Fonda-Fultonville coach Sean Thompson said. “Games like this, you don’t worry so much about the score, you want to come out healthy and that’s what we did.”

Fonda-Fultonville got off to a fast start, scoring on their second drive of the game when quarterback John Mancini found Garrett Neff wide open behind the Helderberg Valley defense for a 55-yard touchdown pass. Jeremiah Hunter kicked the extra point to put the Braves up 7-0.

The Braves defense stopped Helderberg Valley on the ensuing drive and were rewarded. Jonathan Cranker broke through the line and blocked Harrison White’s punt. The ball went up in the air and D.J. Greco grabbed it and ran it in from 34 yards out for the touchdown. Hunter again kicked the extra point for a 14-0 lead .

Mancini closed out the first-quarter scoring, breaking through the left side of the line and racing 58 yards for a touchdown with seven-second left in the opening quarter.

The Braves continued to roll in the second quarter as Mancini hit Jackson Atty with a 10-yard pass that he walked into the end zone with and, with Hunter’s point after kick, put the Braves up 27-0.

Helderberg Valley offense could not get on track against the Braves and turned the ball over on downs on the Fonda-Fultonville 26 with 1:30 left in the opening half. Eight plays later, Mancini hit Angelo Canale with a 4-yard touchdown pass and, with Hunter’s kick, closed out the opening half with a 34-0 advantage.

With a running clock in the second half, Coach Thompson mixed in his reserves to lock up the 34-0 non-division victory.

Mancini finished with 190 yards and three touchdowns in a 14–for-17 passing performance and rushed the ball three times for 113 yards and a touchdown.

“He [Mancini] makes big plays for us. He has all year,” Thompson said. “We have some little things that we have to clean up and we will work on those this week. We have had that mentality all year of trying to solve problems, fix mistakes and be detail-oriented. That’s where we’re going to keep doing.”

Helderberg Valley quarterback Jakob Stahl produced the majority of its offensive stats carrying the ball 15 times for 68 yards and was 6-for-14 passing for 49 yards.

The Sir Bills are coming off a 50-16 loss to Class B defending state champion Glens Falls.

“We don’t look at Johnstown as a soft game at all,” Thompson said. “They’re a B school, they’re bigger than us up front and they’ve got some really good athletes. For us, that’s a big, big game. We are not taking anything for granted. It is a local rivalry and anything can happen.”

QUEENSBURY — Garrett Dooling connected with Giorgio Glionna on a 15 yard touchdown pass to score the Huskies’ first touchdown in the opening half this season.

However, it was not enough to offset a four touchdown, 196-yard first half rushing performance from Queensbury’s Jason Rodriguez as the Spartans improved to 50- overall and 4-0 in the Grasso Division standings.

The Huskies’ Ethan Hunt added an 11-yard touchdown run and ran in the 2-point conversion in the fourth quarter to round out the Gloversville scoring.

Hunt finished with 22 yards and a touchdown on six carries, while Dooling was 7-for-18 for 56 yards and touchdown and an interception.

Glionna had three catches for 41 yards and touchdown, while Jaret Warner had one catch for nine yards and Parker Simek had two receptions for seven yards.