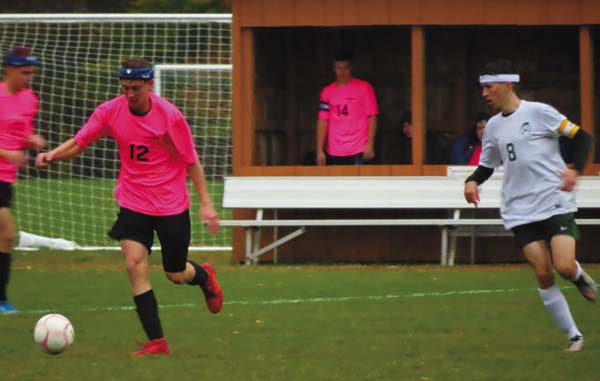 NORTHVILLE — Levi Morgan scored the lone goal for Northville in a 1-1 tie with Middleburgh in a Western Athletic Conference boys soccer contest Wednesday.

Jacob Frank assisted on the goal for the Falcons, who outshot the Knights by a 13-4 margin.

Daniel VanNostrand made one save for Northville (9-4-2 overall, 7-2-2 WAC), while Michael Terrell finished with five stops for Middleburgh. 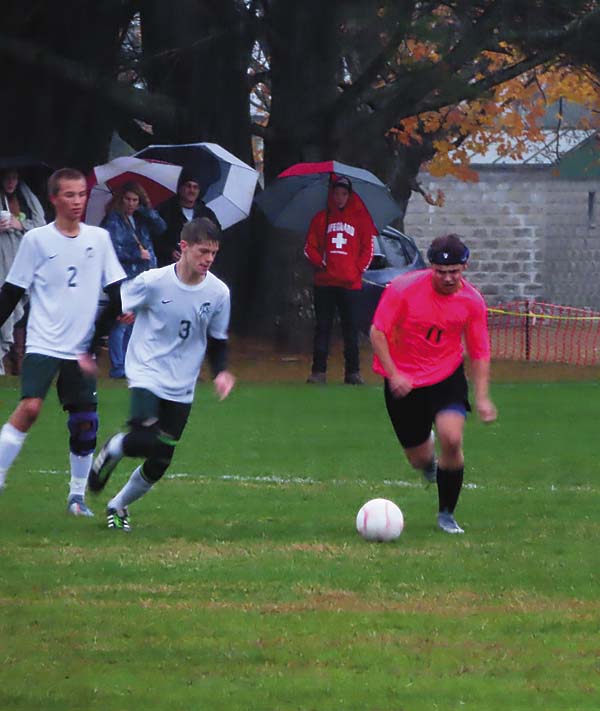 The game also was Northville’s annual pink out game in which the players wore pink uniforms and raised money for the American Cancer Society.

The game was halted with five minutes to play in the second half due to darkness.

Northville is scheduled to travel to Oppenheim-Ephratah/St. Johnsville on Friday for a 7 p.m. contest. It will be the final regular-season game for both teams.

FONDA — Ethan Schoch scored the game’s only goal in the 78th minute to lift Fort Plain to a Western Athletic Conference victory over Fonda-Fultonville at John G. Boshart Field.

Fonda-Fultonville is scheduled to travel to Duanesburg on Friday for a 4:15 p.m. contest.

MAYFIELD — After falling behind 2-0 in the first few minutes of the game, Mayfield rallied for a Western Athletic Conference victory over Berne-Knox-Westerlo.

Colby Brandon netted three goals for the Panthers, while Trevor Lehr had a goal and two assists. Dawson Leach posted a goal and an assist for Mayfield, while Britain Goodemote and Kenny Dennis each had an assist.

Mayfield (6-9 overall, 6-5 WAC) is slated to travel to Scotia to face Mekeel Christian Academy in its regular-season finale Friday at 4:15 p.m.

ST. JOHNSVILLE — Playing Mekeel Christian Academy for the second time in three days, Oppenheim-Ephratah/St. Johnsville posted another victory over the Lions, this time in a Western Athletic Conference contest.

The Wolves posted a 3-2 win over Mekeel Christian in the consolation game of the Maple Hill Tournament on Monday.

Wednesday’s rematch saw OESJ get two goals from Ian Hayes and Andrew Snell on its way to the win.

Jacob Snell and Max Cristianson also scored for the Wolves (9-5 overall, 8-3 WAC), while Andrew Snell, Mason Snell and Jordon Simzer each had an assist.

Travis LaFountain made three saves for OESJ, while Ilan Martuscello made nine stops for the Lions.

Bailey Smart and Jeremy Rehberg each made four saves to share the win in goal for Schoharie.

DUANESBURG — Connor Barber finished with six goals and an assist to lead Notre Dame-Bishop Gibbons to a WAC victory over Duanesburg.

Bruce Campbell made 14 saves for the Golden Knights (3-8 WAC).

NEWCOMB — Logan Bush and Alvero Santafe each had two goals to lead Newcomb to a Northern Soccer League Division III victory over Wells.

Logan Bush also had two assists for the Huskies, while Tran, Santafe and Lamas each had one assist.

Ethan Armstrong made just one save to post the shutout in goal for Newcomb, which outshot the Indians by a 24-2 margin.

HERKIMER — Gaven Miller scored twice and had an assist to lead Herkimer to a victory over Dolgeville.

Anthony Briggs and Nicholas Lyga also scored for the Magicians.

Dolgeville slipped to 4-9-1 overall with the loss.