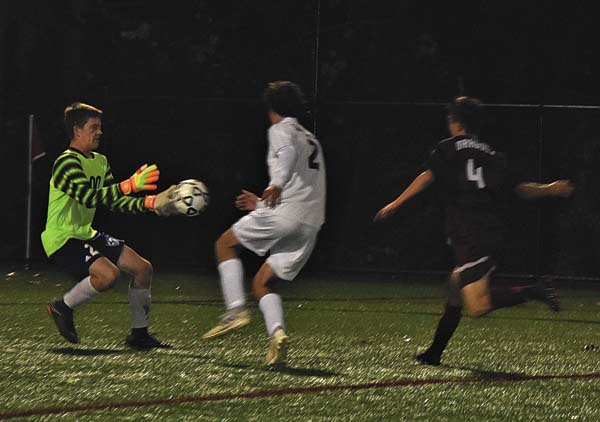 Johnstown defender Kyle Salamack (2) and Gloversville's Kazuma Lomanto (4) close on the play as the Sir Bills' goalkeeper Jack Germain comes off his line to cut down the play during Foothills Council action Monday at Gloversville High School. (The Leader-Herald/James A. Ellis)

GLOVERSVILLE — The Gloversville Dragons closed out their regular season home schedule Monday on a positive note.

On a night when they honored their senior players, Feras Masri, Keegan Holmes, Arron Sowle Jr. and Anderson Jones, the Dragons connected for four second-half goals to defeat inter-city rival Johnstown 6-0 in Foothills Council action under the lights at Gloversville High School.

“The kids played hard the whole game,” Gloversville coach Jim Yanno said. “It was nice for the seniors. All four of our seniors played extremely well and Feras [Masri] walked away with a hat trick. Our fans were wonderful tonight. It was nice to play at home and get a win.”

The Dragons pressure paid off with 24:50 when Masri timed his run onto a through ball from Emran Abbas to get in one-on-one with Germain and finish the play for a 1-0 advantage. 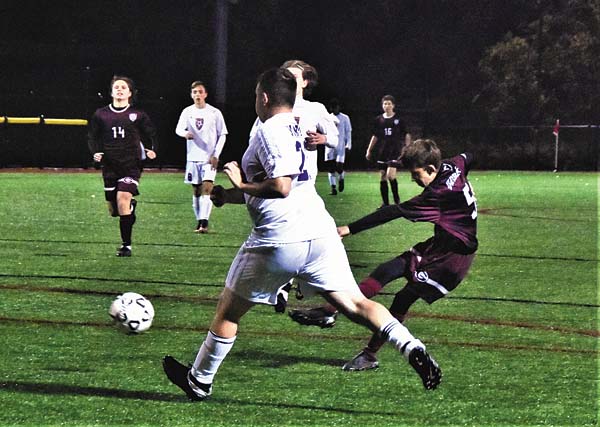 Johnstown's Camron Sweet (22) closes on the play as Gloversville's Drew Callen (5) puts a shot on net during Monday's Foothills Council match at Gloversville High School. (The Leader-Herald/James A. Ellis)

The Sir Bills pushed for the equalizer and developed a run into the Gloversville defensive zone.

The complexion of the game changed on the play as the Sir Bills had a goal called off and a red card issued for hard contact with Gloversville goalkeeper Justin Kemmet, leaving Johnstown playing a man-down the remainder of the match.

The Dragons added a second goal in the final minute of the opening half when Kazuma Lomanto scored an in-swinger directly off a corner kick from the left side to put the Dragons up 2-0.

The Dragons added a third goal early in the second half when Abbas gained control of a pass from Masri and dribbled into the penalty area before putting a shot into the back of the net at the 2:21 mark of the half.

Gloversville continued to keep the pressure on the Johnstown back line but could not come up with another goal until Abbas collected his second goal of the night after Germain made the initial stop on a shot by Masri and Abbas slotted home the rebound for a 4-0 edge with 14:15 left to play. 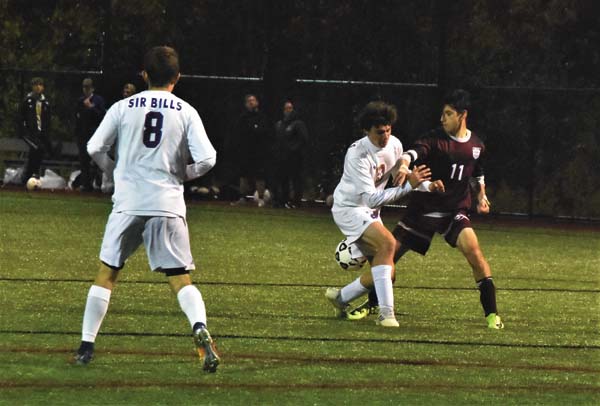 Johnstown's Kyle Salamack (2) and Gloversville's Feras Masri (11) battle for control of the ball during Monday's Foothills Council match at Gloversville High School. (The Leader-Herald/James A. Ellis)

Masri picked up his second goal of the match with 2:33 left to play when he finished off a pass from Paul Lomanto and closed out his hat trick finishing a rebound off a shot by Drew Callen to close out the 6-0 final.

“Our starting goalkeeper [Josh Hoyt] is injured. Jack Germain has been in goal for two weeks and he has really stepped up,” said Johnstown coach Nicole Naselli. “Playing a man down the whole game they kept their heads about them, but the defense had to get shifted around at the end.”

Germain finished with 15 saves on 24 shots on goal from the Dragons, while Kemmet and Cayden King combined for two saves in goal for the shutout.

Gloversville (5-7-1 overall, 4-6-1 Foothills) will close out its regular season on the road with a league match at South Glens Falls on Thursday before facing Guilderland in a non-league match Saturday and closing out their regular season Monday with a Foothills Council match at Amsterdam.

“I think we are going to head to [Class A] sectionals,” Coach Yanno said. “We are 4-6-1 right now in the league and have come together in the second half. I like the way we have played the last couple of games.”

Johnstown (1-11-0 overall, 1-10-0 Foothills) will travel for a Foothills Council match against Schuylerville on Thursday.

The game was rescheduled for today at 4:15 p.m.

FRANKFORT — Malik Coulthurst scored twice to lead Frankfort-Schuyler to a victory over Dolgeville on Saturday.

Jacob Null, Owen Davies and Aiden Davies scored for Dolgeville, which posted a 1-0 win at home over Old Forge on Sept. 30. Garrett Lettow added an assist for the Blue Devils.

SCHOHARIE — Noah Fagnani netted three goals to lead Schoharie to a victory over Amsterdam in the opening round of the Kyle Sharpe Memorial Tournament on Saturday.

Danny Bernhardt also scored for the Indians, while Dustin Bengtson had two assists. Ethan Drinon and Derek Dietz each had an assist for Schoharie.

Bailey Smart made four saves for the Indians.

In the other first-round contest, Stillwater posted a 2-1 win over Delaware Academy.