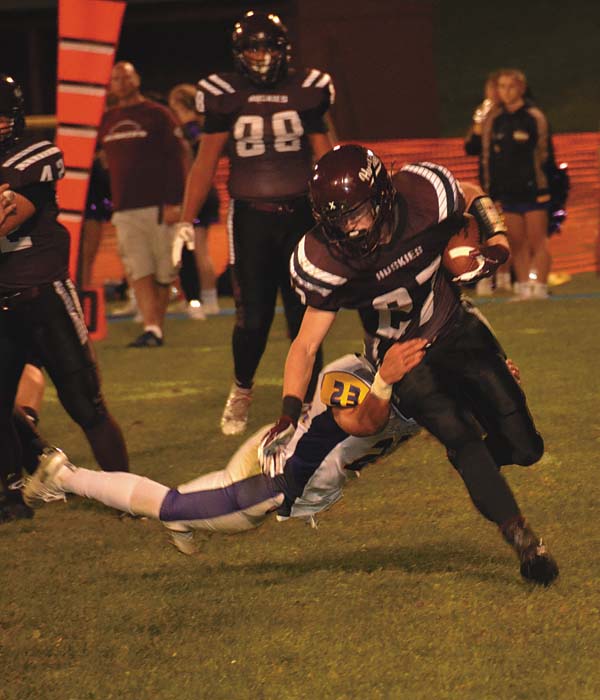 GLOVERSVILLE — The Gloversville Huskies played host to the Scotties of Ballston Spa Friday night at Husky Field in a Class A Grasso Division match-up.

With both teams looking for their first win of the season, Ballston Spa took advantage of big plays to get in the win column with a 49-6 win over the Huskies.

On the night, the Scotties put up 522 yards of total offense to dominate the game.

Gloversville head coach James Robare said, “Tonight, hats off to Ballston Spa and their head coach. They did a great job.”

It didn’t take long for the Scotties to strike as Aidan Thomas intercepted a Gloversville pass and took it in from the 20 for the first score of the game. Justin Dawes kicked the extra point and Ballston Spa led 7-0 at the 10:08 mark in the first quarter. 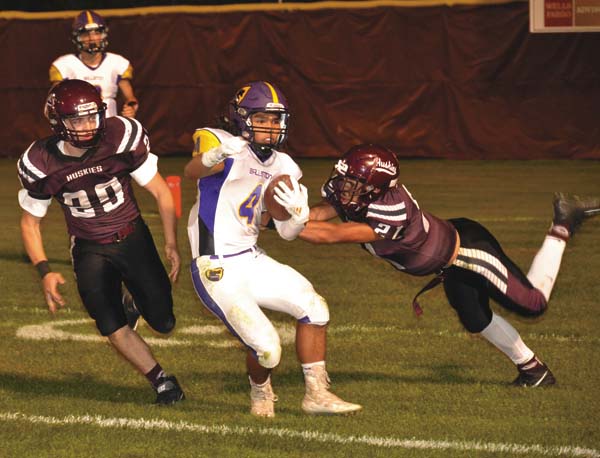 After Nicholas Nellis punted the ball away for the Huskies Ballston Spa took over on the Gloversville 41. CJ Gaurino ran for 24 yards on two carries and James Pastio, Jr. had a six-yard run to move the ball to the 11-yard line. That’s when quarterback Keegan Zoller connected with Kade Dashnow for a touchdown reception. Dawes’ kick made the score 14-0 with 5:37 to go.

The second quarter saw the Gloversville defense come to life and maintain control of the Scotties for most of the period.

“I brought the team together between quarters and told them; We’ve got to play football! We’ve got to get after it!” Robare said. “We became more aggressive. We changed our front a little and that seemed to create havoc for their pull guys”, he added.

Ballston Spa forced a Gloversville punt and four plays later Thomas hauled in a pass from Zoller for a 73-yard touchdown. With Dawes’ kick successful, the Scotties lead was now 21-0.

Another four and out for the Huskies gave Ballston Spa the ball on their 31. The Scotties moved the ball upfield with the aid of a 46-yard run by Zoller to put the ball on the Huskies 28. On third down, Zoller found Brad Sharp open down the middle for a 28-yard touchdown pass with 8.6 second remaining in the half. The kick was good by Dawes and the Scotties took a 28-0 lead into the half time break.

Ballston Spa received the second half kick-off and brought it out to their 49.

David Rodak picked up 17-yards on three carries and Sharp carried the ball two times for 18-yards to move the ball to the 11. Sharp capped off the drive with an 11-yard run for a touchdown with 7:59 remaining in the third quarter. The kick by Dawes was good and Ballston Spa now led 35-0.

The Scotties got the ball back after a Gloversville punt and started at their own 43.

Jovie Acacio moved the ball to the Gloversville 24 gaining 33 yards on three straight carries. With 1:54 left in the period, Rodak ran it in for another Ballston Spa touchdown. Dawes kicked the extra point to put the Scotties up by a score of 42 – 0.

Ballston Spa added one more touchdown in the fourth quarter when Gregg Dort finished off the Scotties drive with an 11-yard touchdown run at the 8:21 mark. Dawes remained perfect by kicking his seventh extra point of the night to give the Scotties a 49 – 0 lead.

On the next possession Gloversville did manage to get on the board.

Nellis returned the kick-off out to the Huskies 40-yard line. A fumble moved the Huskies back to the 35 where Ethan Hunt picked up seven yards. On thir- and-eight, Garrett Dooling ran for the first down and a penalty on the Scotties for a late hit out of bounds moved the ball to the Ballston Spa 35. Dooling found Giorgio Glionna open down the middle for an 18-yard pick up. On first-and-10 from the 17, Dooling again found Glionna across the middle where he rumbled in for the touchdown with 1:28 left in the game. The point after attempt was no good making the final score 49-6.

With the Huskies taking on Glens Falls next week Robare said, “We’re going to look at film. We’re going to come out and we’re going to get better. That’s what we need to do right now.”

LANSINGBURGH — The Johnstown Sir Bills broke into the win column with a division win over Lansingburgh Friday night at Lansingburgh High School.

The Sir Bills jumped out to an early lead with first-quarter touchdowns from Bradley Bronell and Chase Benton.

The duo scored again in the third quarter before Ethan Warner added Johnstown’s fifth touchdown of the game in the fourth quarter.

Jacob Lapham broke up the shut out with a 4-yard run late in the fourth quarter.

Johnstown is scheduled to travel to Hudson Falls next Saturday for a 1:30 p.m. game.

Josh Ahrens added 132 rushing yards and a score to the Bulldogs stats.

Amsterdam (1-1 overall, 0-1 Class A Capital) is slated to host Columbia at 1:30 p.m. next Saturday in its homecoming contest.

SANDY CREEK — Kyle Getman scored the only touchdown for Dolgeville in a Section III Class D victory at Sandy Creek.

Adam Hilton scored on a 13-yard run for Sandy Creek.

Dolgeville (2-0 overall, 2-0 Class D) is scheduled to host Frankfort-Schuyler next Saturday at 1:30 p.m.