Gloversville hangs on for victory over Lady Braves 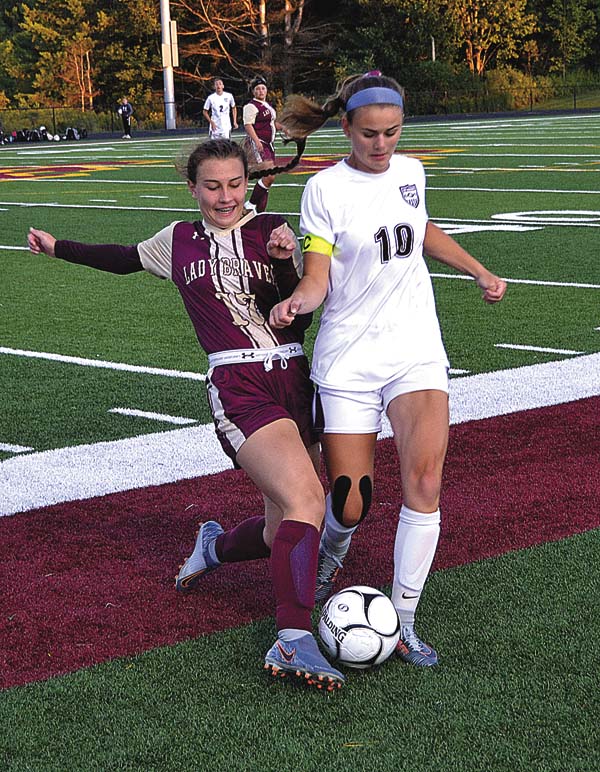 Gloversville’s Michaela Ponticello (10) and Fonda-Fultonville’s Kyla Smith (17) chase down a ball during Saturday’s non-league contest at Boshart Field in Fonda. (The Leader-Herald/Paul Wager)

FONDA — For half of Saturday’s non-league contest with Fonda-Fultonville, the Gloversville girls soccer team looked like it was going to cruise to a victory at Boshart Field.

After getting first-half goals from Taylor Mee and Michaela Ponticello, the Lady Dragons appeared to be on their way to an easy win.

Instead, the Lady Braves turned the tables, controlling most of the action in the second half and forcing Gloversville to hang on for a 2-0 victory.

“Fonda-Fultonville gave us a good game,” Gloversville coach Mike Hallenbeck said. “I think all-in-all, to get a win and a clean sheet, we’ll take it.”

In the first 40 minutes of the game, it looked like the Lady Dragons were on their way to a big win, outshooting the Lady Braves by a 16-3 margin.

“We looked good in the first half,” Hallenbeck said.

After several near misses, the Lady Dragons broke through for the game’s first goal with 16:54 left in the first half when Mee scored on an assist from Melia Stoller.

Gloversville struck again with 12:38 to play in the opening half when Ponticello took a pass from Brooke Dutcher on the left side of the box and lofted a shot inside the right post to make it 2-0.

Ponticello, Mee, Sydney and Katie Callen all had chances in the first half stopped by FFCS keepet Emma Crahan, who made nine saves in the opening 40 minutes.

“Gloversville is a much more skilled team. I’m impressed with their program,” Sandel said. “They played possession soccer in the first half and we expended a lot of energy running to keep up with them. In the second half, we were able to put Gloversville on their heels and generate some opportunities.”

After the break, Fonda-Fultonville started quickly, getting scoring chances from Quincy Lake and Sierra Rose.

The Lady Braves continued their offense push throughout the second half but we unable to find the back of the net – leaving the final score at 2-0.

Katie Hastings made six saves to post the shutout in goal for Gloversville, while Emma Crahan finished with 13 saves for FFCS.

Gloversville (2-1 overall) is slated to play three games this week, traveling to Amsterdam on Tuesday for a 6:30 p.m. game before hosting Glens Falls on Thursday at 4:30 p.m. and Johnstown on Saturday at 7 p.m.

“This is a big week for us,” Hallenbeck said. “We’re ready for it.”

The Lady Braves are also scheduled to play three games this week – all at home.

Fonda-Fultonville (1-2 overall) is scheduled to host Amsterdam today at 7 p.m. The Lady Braves will also host Schoharie on Wednesday and Mayfield on Friday. Both of those games are slated to begin at 4:30 p.m.

“Every game is a chance for growth,” Sandel said.

NISKAYUNA — Brytney Moore finished with three goals and an assist to lead Northville to a victory over Parishville-Hopkinton in the New York State High School Girls Soccer Hall of Fame Tournament.

Kaytelynn VanHeusen also scored for the Lady Falcons, while Grace Forsey and Caitlin Henderson each had an assist.

Northville outshot Parishville-Hopkinton by a 19-6 margin and had a 6-1 edge in corner kicks.

The Lady Falcons returned Sunday and dropped a 5-0 decision to Little Falls.

In the match Northville put 15 shots on goal and had three corner kicks.

Grace Giarrizzo and Roslyn Chapin also scored for the Lady Bills, while Madison Delgado had two assists. Ally Queeney and Giarrizzo each had an assist for Johnstown.

Hope Buboltz made 10 saves for the Lady Bills.

Giarrizzo delivered Johnstown’s goal off an assist from Fitzpatrick in Sunday’s match against Tamarac that ended in a 1-1 draw at the New York State High School Girls Soccer Hall of Fame Tournament.

Buboltz made seven saves on 10 Tamarac shots, while the Lady Bills put 13 shots on net.

Megan Schuermann made seven saves to post the shutout in goal for the Hawkeyes.

Sunday, the Lady Cougars fell to Watertown IHC 2-1 at the Hall of Fame Tournament.

Victoria Adams scored for Canajoharie off an assist from Kylee Richard.

Pitcher pulled in 14 saves in goal for the Lady Cougars, while Keely Cooney had seven saves for Watertown IHC.

NISKAYUNA — Sophie Estes scored both goals to lead Hoosick Falls to a victory over Mayfield in the New York State High School Girls Soccer Hall of Fame Tournament on Saturday.

Phoebe Thompson and Maddy Walker each had an assist for Hoosick Falls.

Logan Thayne made 12 saves for Hoosick Falls, while Kat Knecht had 11 stops for Mayfield.

MAYFIELD — A.J. Nymph scored twice to lead Greenwich to a 3-1 victory over Mayfield in the opening round of the Mayfield Tournament on Saturday.

Charlie Gartner also scored for the Witches, who outshot the Panthers by a 9-4 margin.

Trevor Lehr scored the lone goal for Mayfield on an assist from Britain Goodemote.

Christian O’Brien made three saves for Greenwich, while Owen Graf made six stops for Mayfield.

In the other first-round game, Lake George topped Greenville, 4-2.

Lake George will face Greenwich in the championship game next Saturday at 7 p.m., while Mayfield and Greenville will meet in the consolation game at 5 p.m.

OLD FORGE — Sasha Fielteau finished with three goals to lead Old Forge to a victory over Dolgeville on Friday.

Jacob Grossman made 23 saves for the Blue Devils.