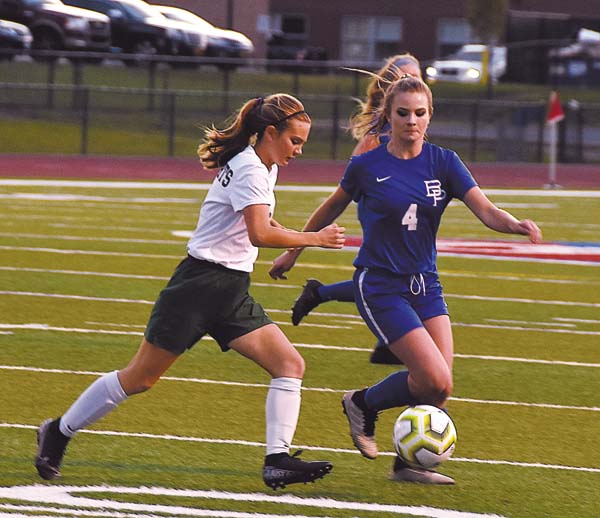 BROADALBIN — Lauralie Grainer scored twice and had an assist to lead Broadalbin-Perth to a 5-0 victory over Middleburgh in a non-league girls soccer contest Monday at Patriot Field.

Brooke Bush had a goal and an assist for the Lady Patriots, while Amirah Carsno and Emily Bush also scored.

Rose Barnhart added an assist for B-P, which outshot Middleburgh by a 27-0 margin.

Cameryn Shultes made 14 saves for Middleburgh, while Kylie Whitt made one save for the Knights.

Caitlin Palmateer didn’t need to make a save to post her third shutout of the season for Broadalbin-Perth (4-0 overall). 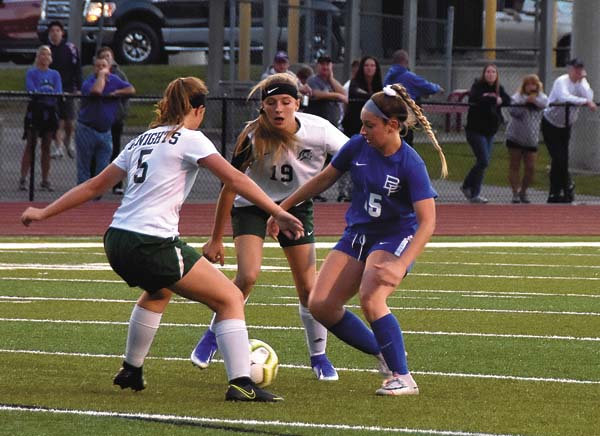 Middleburgh's Alyssa Wayman (5) and Vivian Hanley (19) double Broadalbin-Perth's Rose Barnhart (15) as she works the ball in the midfield Monday during non-league action at Patriot Field at Broadalbin-Perth High School. (The Leader-Herald/James A. Ellis)

The Lady Patriots are scheduled to travel to Scotia-Glenville today for a 4:30p.m. Foothills Council South Division contest.

FONDA — Antonia May finished with four goals to lead Amsterdam to a non-league victory over Fonda-Fultonville. 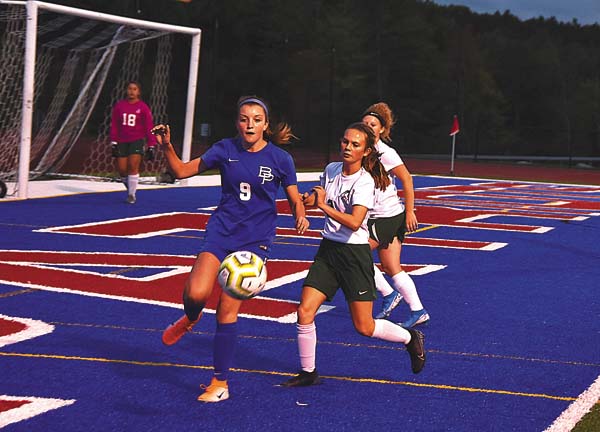 Broadalbin-Perth's Brooke Bush (9) is pressured by Middleburgh's Andie Burton (2) as she works for control of the ball in the Knights' defensive zone during non-league action Monday at Patriot Field at Broadalbin-Perth High School. (The Leader-Herald/James A. Ellis)

Karen Troche-Esteva finished with five saves for Amsterdam, while Emma Crahan made nine saves for Fonda-Fultonville.

SCHROON LAKE — Malena Gereau and Saige Shaughnessy each scored two goals to lead Schroon Lake to a victory over Wells.

Maddie Anauo also scored for the Wildcats, who led 4-0 at halftime.

Alexis Brooks scored the lone goal for Wells, which was outshot by an 18-5 margin.

Haillie Courtney made eight saves for the Lady Indians.

NISKAYUNA — Katie Donnelly scored the game’s lone goal in the final minute of regulation to lift Cooperstown to a victory over Mayfield in the in the New York State High School Girls Soccer Hall of Fame Tournament Sunday.

WATERVILLE — Alexis Smith scored three goals to lead Dolgeville to a 4-0 victory over Brookfield in the consolation game of the Waterville Tournament on Saturday.

Rylee Lamphere also scored for the Blue Devils, while Gabby Kenyon, Bella Nichols and Emma Bilinski all had an assist.

Ryanne Williams and Dakota Jeffers combined to make eight saves to share the shutout in goal for Dolgeville, which outshot Brookfield by a 25-4 margin. Madilyne Kupris made 21 saves for Brookfield.

Bilinski and Smith were named to the all-tournament team for Dolgeville.