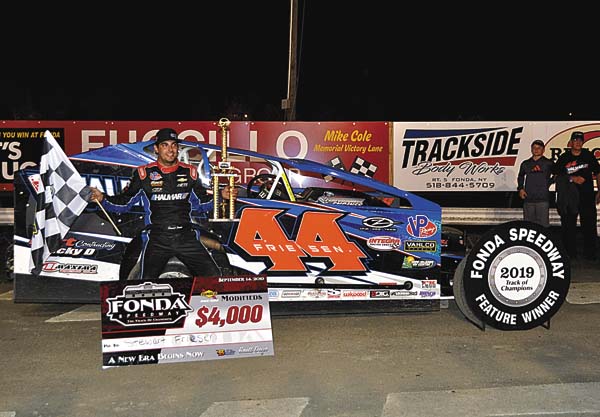 Friesen debuted a new Bicknell chassis and broke it in with a victory in the 30-lap, $4,000-to-win Sunoco Racing modified feature event.

Tim Hartman Jr. took the field from green-to-checkers to grab the victory in the 50-lap, $1,000-to-win King of Dirt Northeast Nationals in the Swagger Factory Apparel Crate 602 Sportsman feature.

Brian Gleason and Anthony Perrego brought the 24-car field of modifieds to the green with Gleason pulling out to the early lead.

By lap six the top three of Gleason, Perrego, and Friesen, who started fifth, pulled away from the rest of the field. The first caution of the race came on lap six when Danny Varin spun in turn four.

On the restart, Perrego took over the top spot with Friesen following past Gleason into second.

The race went back under caution when Ancel Collins and Bobby Varin got together between turns one and two. Collins’ run was done for the night, while Varin returned to the back of the pack.

Perrego maintained his lead over Friesen on the restart as Rocky Warner and Dave Constantino joined the front-runners in third and fourth respectively.

The race went under the red flag when the fifth-place car of Davis Schilling violently flipped in turn one. Josh Hohenforst had no where to go as he slid into Schilling’s car as it settled upside down on the track. Both drivers escaped without injury.

When the race resumed Friesen pulled away at the drop of the green and pulled way for his 59th career modified win at Fonda Speedway.

“I love this place,” Friesen, who returned Saturday after placing said in the Fuccillo Automotive Mike Cole Memorial Victory Lane. “The 18 [Perrego] was fast and they have a lot of good stuff in that program so honestly I didn’t know if I was going to be able to pass him or not but he was starting to get free off of turn four and I was able to get by. The track was super smooth and awesome tonight so thanks to the Fonda track crew and thanks to my guys who prepared two new race cars this week for Jessica and I to race tonight.”

After an hour rain delay the 50-lap KOD Northeast Nationals took to the track for the Swagger Factory Apparel Crate 602 Sportsman feature.

Hartman Jr. , the 2019 Fonda Speedway Track Champion, drew the outside pole and, after a pair of early-race cautions, pulled away to a full straightaway lead over Brian Borst and JaMike Sowle.

By lap 25, Hartman was picking his spots through the lapped traffic as Borst, Sowle, Brian Calabrese and Bobby Hackel IV locked in a battle for the runner-up spot.

Hartman survived a scare on lap 32 when Tim Falter spun in front of him as he was about to put him a lap down, bring out the caution.

With a clear track in front of him, Hartman was able to again build a solid lead as the battle continued for second between Borst, Calabrese, Sowle and Hackel.

Joe Williams came to a stop in turn four to bring out the final caution of the race and set up a three-lap shootout for the win.

Sowle got past Borst for second on the restart and pressured Hartman over the final laps but could not find a way past as Hartman recorded his sixth win of the season at Fonda. Sowle was second followed by Borst, Calabrese and Hackel.

“It’s great to come back after a break for the fair and get another win,” Hartman said in victory lane. “I was worried about the rain but we made as many adjustments as we could after the rain delay and it got us another win.”With his fifth-place finish, Hackel wrapped up the King of Dirt series title.

Gates started the Algonkin Motel Pro Stock feature on the outside of the front row and never looked back as he led all 20-laps to post his third win of the season and 83rd of his career at The Track of Champions.

2019 Pro Stock track champion Luke Horning and Josh Coonradt engaged in a battle for second with Coonradt getting the spot on the final lap. Nick Stone finished fourth with Shane Henderson fifth.

“We’ve been working on this car, traveling and experimenting with it,” Gates said in Victory Lane. “Now we have a setup that I’m not real comfortable with but I just have to get in it and drive it. Thanks to my crew for their long nights working on this car and to Pete Stefanski and the Beldon’s who have helped us with the setup. The track was fast tonight and couldn’t have been any better.”

Hollenbeck led every lap of the Four Cylinder Cruiser feature for his seventh win of the season and the 49th of his career in the division at Fonda over Dale VanAllen, Wayne Russell, Jeffrey Tubbs and Katrina Bean.

Trombley started the 20-lap CRSA Sprint feature on the pole and jumped out into the lead over Darryl Ruggles second.

After starting sixth, Kiser was the new third place car on lap five while Trombley was out to a straightaway advantage. Kiser took the second spot away from Ruggles on lap eight and was challenging Trombley for the lead on lap 12.

Kiser got by Trombley for the lead on lap 17 but by the time the lap was completed Trombley retook the lead at the line to complete the lap. Trombley went three wide at times around lap traffic to maintain the lead and collect his second CRSA victory at Fonda Speedway.