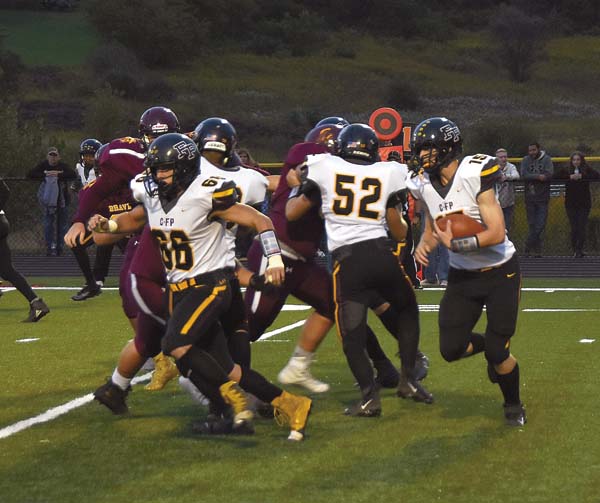 The Braves set the tone early, blocking a Canajoharie-Fort Plain punt and recovering the loose ball in the end zone and never looked back as they rolled to a 47-32 victory.

“We talked all preseason and continue to talk all the time about the importance of special teams and we work on it,” Fonda-Fultonville coach Sean Thompson said. “It set the tempo for us tonight. It got us off to a fast start and that is exactly what we wanted.”

After Derek Duval’s kick off was mishandled, Canajoharie-Fort Plain started their opening drive on their 2-yard line. Unable to move the ball out of the shadow of the goal posts, they were forced to punt the ball away.

The Braves Jonathan Cranker, Maccrea Godabout and Riley Cole broke through and got to C-FP punter Dalton Consalvo to block the punt. Riley recovered the loose ball for a touchdown. Jeremiah Hunter added the extra point to put Fonda-Fultonville up 7-0 with 1:36 off the clock. 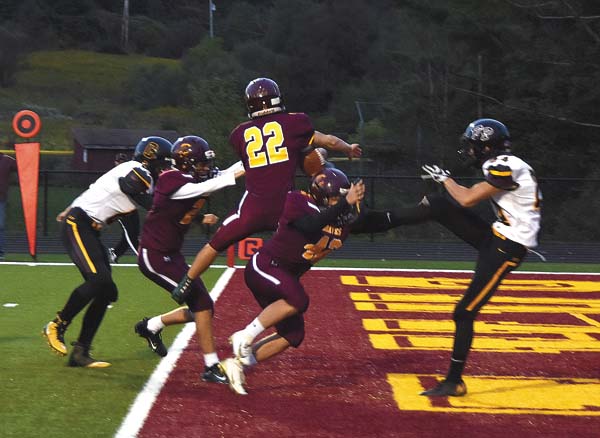 Fonda-Fultonville's Jonathan Cranker (42), Maccrea Godabout (22) and Riley Cole (2) rush Canajoharie-Fort Plain punter Dalton Consalvo (24) and block the punt early in the first quarter Friday night at John G. Boshart Field at Fonda-Fultonville High School. Cole recovered the blocked punt in the end zone for a touchdown on the play. (The Leader-Herald/James A. Ellis)

The Braves defense came up with a big play on the ensuing drive, forcing a fumble that Danny Morton recovered.

Two plays later John Mancini hit Jack Atty with a 35-yard touchdown pass and Hunter added the point after for a 14-0 lead.

Canajoharie-Fort Plain responded with a scoring drive with quarterback Derek Hyney connecting on four passes of 10-yards or more to set up Andrew Ferguson’s 1-yard touchdown run. The 2-point conversion failed, leaving the score at 14-6.

Despite having a 41-yard touchdown called back for a block in the back, the Braves stayed focused with Giovanni DiCaprio roping 20 yards for the touchdown and Hunter adding the extra point for a 21-6 advantage at the end of the opening quarter. 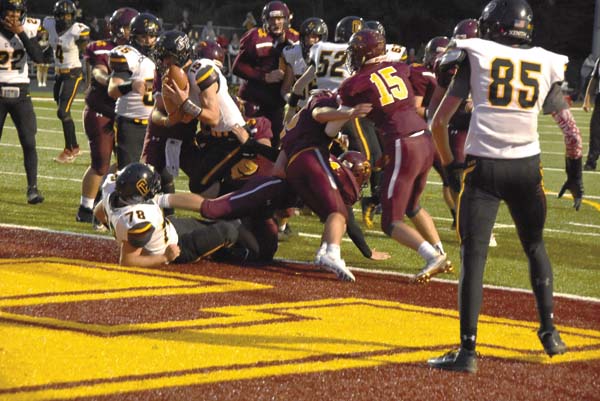 Canajoharie-Fort Plain's Andrew Ferguson (15) carries the ball in from a yard out for a touchdown against Fonda-Fultonville. (The Leader-Herald/James A. Ellis)

The Braves defense came through again in the opening drive of the second quarter, forcing a fumble and Garrett Neff recovering the ball. The Braves could not capitalize on the recovery as the C-FP forced the Braves to turn the ball over on downs.

Fonda-Fultonville did put another touchdown on the board with 1:33 left in the opening half when Neff carried a pass from Mancini into the end zone for a 27-6 lead.

Canajoharie-Fort Plain answered the score with Marcus Johnson taking a pass from Hyney 60 yards to the end zone only to have the play called back for a personal foul.

C-FP drove to the 13-yard line but could not punch the ball in before the end of the half.

The Canajoharie-Fort Plain defense held the Braves on their opening drive of the second half and the offense went to work, putting together an eight play drive that finished with Ferguson carrying a pass from Hyney 25 yards into the end zone. A failed 2-point conversion left the score at 27-12. 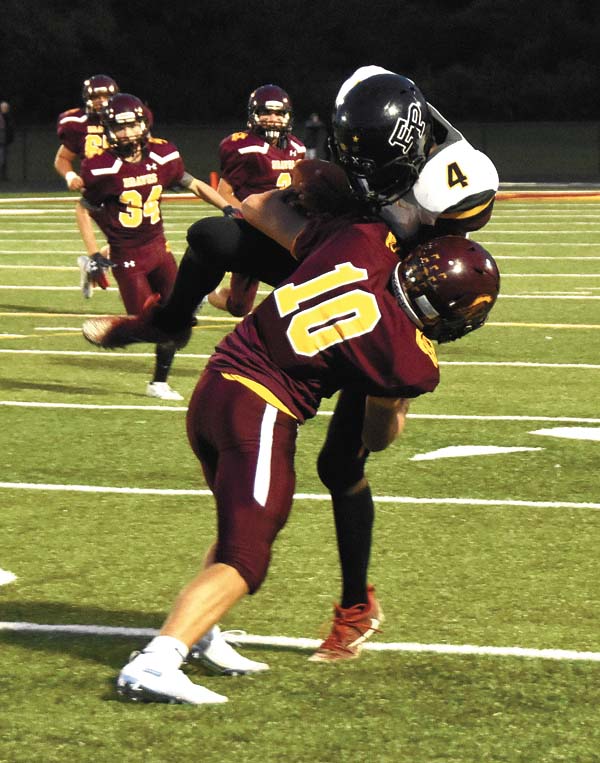 Later in the third quarter the C-FP offense again moved the ball and converted a fourth and 14 with 3:36 left in the quarter. Six plays later Mekhi Lanier finished the drive with a 1-yard run into the end zone to cut the Braves lead to 27-18.

It didn’t take long for the Braves to answer the score as Neff took a pass from Mancini 57 yards for a touchdown on the first play, and Hunter added the extra point for a 34-18 lead with 1:01 left in the third quarter.

A penalty again hurt C-FP as a touchdown pass from from Hyney to Johnson was called back, leaving the score at 34-18.

The Braves extended their lead to 40-18 when Mancini ran the ball in from 23 yards out with 7:43 left to play.

Hyney cut the Braves lead with a 12-yard touchdown run and hit Consalvo with a pass for the 2-point conversion to put the score at 40-26 with 5:23 left to play.

The C-FP defense came up with the stop and the offense responded with Hyney hitting Johnson with a 5-yard touchdown strike to cut the lead to 40-32 with 3:25 left to play.

Fonda-Fultonville got the big play it needed from Atty when he took the ensuing kick off back 67 yards and three plays later DiCaprio ran the ball in from eight yards out. Hunter’s extra point put the Braves up 47-32.

“That was a huge play. Jack Atty is an elite athlete that makes plays,” coach Thompson said. “He does it on the basketball court for us and also here on the football field. He is fun to watch and be around.”

Penalties again prevented C-FP from putting together an answering drive as the Braves held on for the victory.

“I feel Fonda is a great team but I think we played well enough that we could have won that game but for the penalties,” Canajoharie-Fort Plain coach Shannon Hyney said. “I think if you name it we had it called tonight. It [closing the score in the fourth quarter] was kind of fun being in that situation but as players and coaches you try not to ride the wave. You don’t try to not get to high or to low. You try to stay in the middle but I am going to have a few more grey hairs tonight.”

Mancini finished the night with three touchdowns and 178 yards passing in an 8-for-15 effort.

Derek Hyney finished with 253 yards passing in a 22-for-28 performance.

“Fonda is a great team and they capitalized on all the mistakes we made,” coach Hyney said. “That is what great teams do. We were very undisciplined today. Hopefully we can regroup and get ready for Stillwater.”

Fonda-Fultonville is now alone on top of the Class C Central standings with a 2-0 record overall and in the division.

“It is a good start for us. We are very happy,” coach Thompson said. “We have some veteran players but we have to rely on some very young kids. There are times in the game where we have five or six sophomores on the field. We have a lot of inexperience but they are learning and we are making big strides. We are not talking a lot about winning but about the process and setting high standards to improve every week.”

Fonda-Fultonville will look to run their early-season record to 3-0 when it hosts Mechanicville next Friday night.