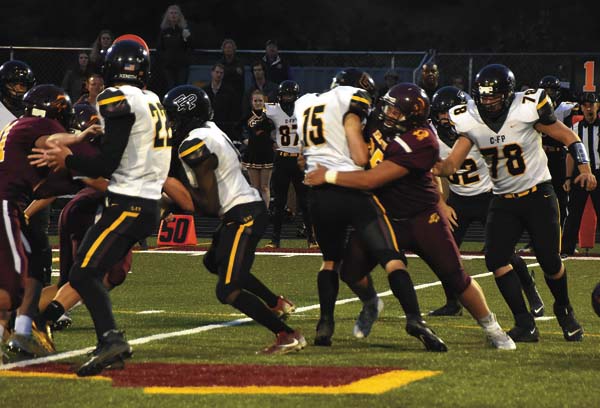 Fonda-Fultonville's Mikey Martindale (65) wraps up Canajoharie-Fort Plain's Andrew Ferguson (15) during a Class C Central Division game on Sept. 15 at John G. Boshart Field at Fonda-Fultonville High School. The Braves will go for their third-straight victory tonight at home against Mechanicville. (The Leader-Herald/James A. Ellis)

Though its just the third week of the season, there is plenty for the area’s high school football teams to play for.

Five area teams — Broadalbin-Perth, Gloversville, Fonda-Fultonville, Dolgeville and Amsterdam — will be at home.

The Patriots, Huskies and Braves all will be in action today at 7 p.m., hosting Schuylerville, Glens Falls and Mechanicville, respectively.

Dolgeville will host Frankfort-Schuyler on Saturday at 1;30 p.m. and Amsterdam will host Columbia in its homecoming contest Sunday at 2 p.m. 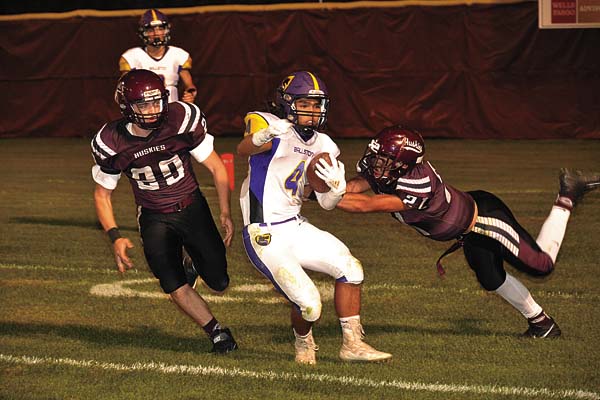 Through two weeks of the season, Gloversville has been outscored 98-19 in losses to Burnt Hills-Ballston Lake (49-13) and Ballston Spa (49-6).

“We focus on playing hard every game and put forth maximum effort on every game, regardless the outcome,” Gloversville coach Jim Robare said. “Every week is important, we will continue to build on our fundamentals and our IQ of football along with being physical.”

The scheduling gods did the Huskies no favors this week as Glens Falls, the defending Class B state champions, will pay a visit to Husky Field.

The Indians are unbeaten through two games this season rolling to wins over Lansingburgh (67-6)and Schuylerville (34-13).

In last week’s lost to Ballston Spa, Gloversville was outgained 522-42 in total yards.

Giorgio Glionna scored the lone touchdown for the Huskies in the fourth quarter on a 17-yard touchdown pass from Garrett Dooling, who came on in relief on an injured Anthony Tomek-Russell.

Glens Falls had little trouble in its win over Schuylerville last week, jumping out to a 27-0 halftime lead on its way to a 34-13 victory.

Noah Girard had three touchdowns passes for the Indians and ran for a 68-yard score. Griffen Woodell had a touchdown cacti and scored on a 99-yard run for Glens Falls.

“It’s very simple, we need to control the line of scrimmage on both sides and try to contain their explosive offense the best we can,” Robare said.

After opening the season with Week 1 wins, Broadalbin-Perth and Schuylerville struggled in losing in Week 2.

The Patriots dropped a 26-0 decision at South Glens Falls after posting a 27-8 victory over Ravena-Coeymans-Selkirk in Week 1.

“I hope we respond, we watched the film and I hope learned from our mistakes,” Broadalbin-Perth coach Jim Pelneau said. “We need to play a much cleaner game both sides of the ball.”

Schuylerville rolled to a 55-16 win at Johnstown in its opener Sept. 6 before losing 34-13 in its home opener to Glens Falls last Friday.

“Every game is important,” Pelneau said. “However, division games are what sets up your postseasons so we have to make sure we are on top of our game.”

The Bulldogs did most of their damage not he groud as Joe Johnson piled up 121 yards and two touchdowns on 19 carries, while Josh Ahrens added 132 rushing yards and a touchdown.

Schuylerville got a 10-yard run for Owen Sherman and a 39-yard interception return for a score from Jack Dwyer in its loss to Glens Falls.

“We need to play more physical, period, we have to do that better if we are going to give ourselves any type of chance,” Pelneau said.

Through two weeks of the season, Fonda-Fultonville has put itself at the top of the Class C Central Division race.

The Braves can further cement themselves in the standings with a win tonight over Mechanicville.

A victory would give FFCS a perfect 3-0 record with just one divisional game left, an Oct. 18 date at Stillwater, who is 2-0 so far this season.

“Our goal is to make it into the Class C Playoffs and compete for a divisional championship,” Fonda-Fultonville coach Sean Thompson said. “We can put ourselves in a great position to accomplish that with a win Friday night.”

Last week, the Braves used a quick start and held off a late rally by Canajoharie-Fort Plain to post a 47-32 victory.

“Our confidence continues to grow. We have learned to respond to adversity and bounce back when things don’t go well in games,” Thompson said. “We’re trying to stay focused on improving each week.”

John Mancini passed for three touchdowns and ran for another for FFCS. Mancini was 8-for-15 for 178 yards for the Braves, who will be at home for a third straight week to start the season.

Mechanicville bounced back from an opening-week loss to Canajoharie-Fort Plain with a 35-12 home win over Hoosic Valley last week.

After opening the season with a 28-20 win at Mechanicville, Canajoharie-Fort Plain will look to bounce back from a 47-32, Week 2 loss at Fonda-Fultonville.

The task won’t be an easy one as C-FP will travel to face an unbeaten Stillwater squad that has looked impressive in wins over Voorheesville (35-0) and Tamarac (46-6).

Quarterback James Galarneau rished for 100 yards and a touchdown for the Warriors in the win over Tamarac. He also threw three touchdown passes in the win.

Mason Seymour had 151 yards rushing and a touchdown for Stillwater, while Luc Lescault ran for an 81-yard score and caught a 40-yard and 20-yard touchdown passes.

Canajoharie-Fort Plain quarterback Derek Hyney was 22-for-28 for 233 yards and two touchdowns for C-FP against FFCS. He also ran for 101 yards and a touchdowns on eight carries.

After dropping its season opener at home against Schuylerville by a 55-16 margin on Sept. 6, Johnstown bounced back in a big way in Week 2.

“This is a huge week for our chance of making sectional play,” Johnstown coach Tyler Hall said. “Hudson Falls is a physical team but so are we.”

Bradey Brownell scored on runs of 21 and 12 yards for Johnstown against Lansingburgh, while Chase Benton added touchdown runs of 11 and 24 yards.

“We need to control the ball with our run game just like last week,” Hall said. “We need to tackle in the open field because their quarterback is a great athlete.”

Riley Maddison had 55 yards rushing against Ravena for the Tigers, who were limited to just 118 yards of total offensee.

Johnstown will play its first Saturday game of the season today and the Sir Bills look to capitalize on the extra day of preparation.

“It does help having the extra day of prep and recovery from last game. Playing on Saturday will also give us a challenge with a hot forecast at kickoff time,” Hall said. “Conditioning has been a big focus this week as we have several players playing on both sides of the ball.”

After squeezing out an 8-6 victory at Sandy Creek last week, Dolgeville returns home to Bynon Field to face Frankfort-Schuyler in a battle of Class D unbeatens.

“We take every game a week at a time. Our emphasis this year is to get better every time you step on the field,” Dolgeville coach Dan Zilkowski said. “We try and prepare every week using the same methods and build a consistent system for our players to follow.”

The Blue Devils got a 2-yard run from Kyle Getman in the fourth quarter to tie the game and got the game-winning points when Ashton Kluge hauled in the two-point conversion pass from Greg Gonyea.

“It was a very long away trip for many new players. Our returning players have experience with long trips during sectional play,” ilkowski said. “We perservered through a very difficult atmosphere to pick up a win and we will hopefully build off that experience.”

Getman finished with 120 yards rushing and a score on 29 carries for the Blue Devils, while Connor Morse had 58 yards on 14 carries. Morse also had two catches for 30 yards.

Frankfort-Schuyler backed up its 26-6 win over Sandy Creek in Week 1 with a 39-12 victory over Onondaga last week.

Tyler Rosati scored on runs of 85, 1 and 2 yards for the Maroon Knights and finished with 140 yards on 14 carries. Jeff DeSarro was 6-for-9 for 91 yards for Frankfort-Schuyler, while also scoring on a 1-yard run.

“We will need to create some turnovers and win the field position battle. We need to finish our offensive drives with points,” Zilkowski said. “We need to avoid turnovers and mental mistakes and we need to keep Frankfort-Schuyler’s offense and special teams from creating big plays.”

Originally scheduled to be played Saturday, Amsterdam’s homecoming game against Columbia was moved to Sunday after the death of Columbia student Pasquale Tirino on Monday.

“I think we will bounce back. We are practicing better,” Amstedam coach Doug Edick said.

Xavier Leigh rushed for 177 yards and three touchdowns for Troy.

Tommy Ziskin had two touchdowns passes for Amsterda, while Deslin Ferrell and Peyton ausfeld each had a rushing touchdown.

“This is a huge game because it is a league game,” Edick said. “We need to stop their run game and put some drives together and score when we are in the red zone.”