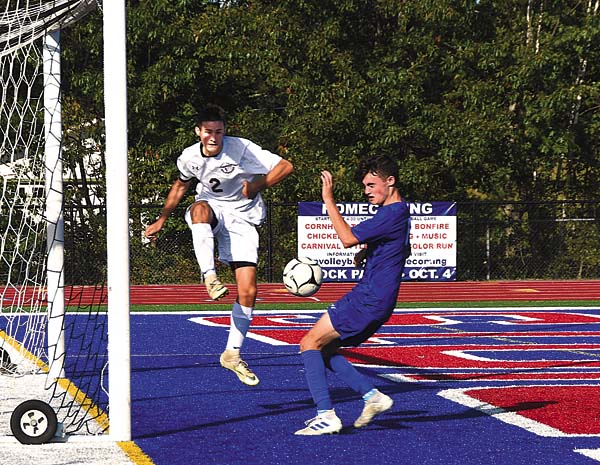 Fort Plain defender Tyler Vogle (2) clears the ball off the line as Broadalbin-Perth's Ian Swartz closes in on the ball during non-league action Monday afternoon at Patriot Field at Broadalbin-Perth High School. (The Leader-Herald/James A. Ellis)

BROADALBIN — In the renewal of a rivalry from the old Tri-Valley League, Broadalbin-Perth and Fort Plain squared off in a boys’ soccer match.

With both teams riding early-season win streak, the Patriots got off to a fast start establishing their possession passing game to help defeat Fort Plain, 6-0 Monday afternoon at Patriot Field at Broadalbin-Perth High School.

Fort Plain goalkeeper Robert Jordan handled the early pressure, coming off his line to cut down the angles on the Patriots.

Kyle Denman put a solid strike on goal that hit the post with eight minutes off the clock. The Patriots kept the play locked into the Hilltoppers defensive end and broke through with 30:14 left in the first half.

Denman again put a solid hit on net that was knocked away, however Cam Polikowski put the long rebound into the back of the net for a 1-0 advantage. 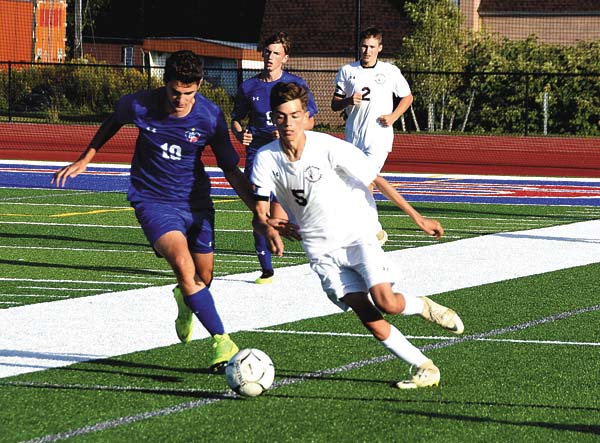 Broadalbin-Perth's Cam Polikowski (10) and Fort Plain's Ethan Reese (5) battle for control of the balll during a non-league match Monday at Patriot Field at Broadalbin-Perth High School. (The Leader-Herald/James A. Ellis)

The Patriots worked quickly to get a second goal and found success just under four minutes later when Jackson Rogers finished off a pass from Hunter Monks to put the score at 2-0.

Broadalbin-Perth continued to work the ball through the midfield and tallied its third goal of the opening half when Sam Rogers put a rebound off Denman’s shot into the net for a 3-0 halftime advantage.

The Hilltoppers’ defense kept the Patriots in check through the first past of the second half and showed an offensive spark as they pushed forward. B-P goalkeeper Jack Marsden was up to the task to turn back the attack and spark a counter attack that ended with Cedric Boehme heading home a direct kick from Sam Rogers for a 4-0 lead with 17:11 left to play.

The Fort Plain offense went back to work and came away with a corner kick that was handled by the Patriots defense.

Denman broke through for a pair of goals in the final eight minutes of play to raise his season total to 10 and close out the 6-0 non-league victory.

“It was probably the closest to 80 minutes that we have put together so far this year,” Broadalbin-Perth coach Brian Henry said. “I thought we did everything we needed to do tactically and generated a lot of nice opportunities to score and did score some nice goals, too. I am very pleased. Finally, all the hard work we have been putting into our practices showed today. Matt [Fort Plain coach Matt Heiser] does a great job with his team and he has done a great job to bring them up to speed but we played well today.”

The Patriots out shot Fort Plain 26-2 for the match and held a 6-1 advantage in corner kicks.

Jordan finished with 13 saves in net for the Hilltoppers, while Marsden picked up his third shutout of the season with two.

“The second half was better,” Fort Plain coach Matt Heiser said. “We came out real passive. We play better soccer than we did tonight. I took this game just to be battle- tested, but I would have liked to have had a better battle but it didn’t work out that way.”

Broadalbin-Perth (5-0-0 overall, 2-0-0 Foothills) returns to league play Wednesday when it travels to Queensbury, which is coming off a 3-1 league loss to South Glens Falls, for a key early-season match before heading to Amsterdam for a 6:30 p.m. league match on Friday.

“Those guys [Queensbury] are so good on so many levels we will have to play our absolute best and there is still no guarantee we are going to have a good result,” Henry said. “But that is why we play soccer. We will have our boys prepared regardless of the outcome.”