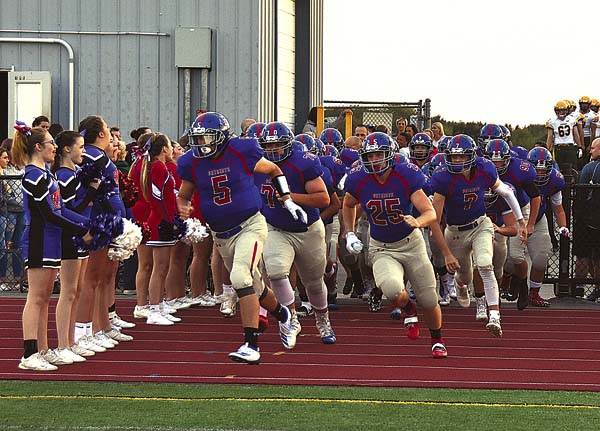 Broadalbin-Perth's Dante Calderone (5) and Ivan Roberts (25) lead the Patriots onto the field for their home-opener against Ravena-Coeymans-Selkirk on Sept. 6 at Patriot Field at Broadalbin-Perth High School. (The Leader-Herald/James A. Ellis)

Heading into the game, the teams are the only teams in the Class C Central with victories.

The Gloversville Huskies are also home tonight, while Johnstown, Broadalbin-Perth, Amsterdam and Dolgeville are playing their Week 2 contests on the road.

Gloversville will host Ballston Spa in a Class A Grasso Division game at Husky Field.

Johnstown will travel to play Lansingburgh in the Class B North contest, while Amsterdam squares off against Troy in a Class A Capital Division game and Broadalbin-Perth faces South Glens Falls in a Class B/A crossover game.

Although there is a long-standing rivalry between the schools, both coaches are approaching the game as just a regular Week 2 football game.

“Our players are excited to have the opportunity to compete against any team they play,” Fonda-Fultonville coach Sean Thompson said.

Canajoharie-Fort Plain coach Shannon Hyney said his players “are a very relaxed team usually but the excitement is high for these guys this week.”

The Braves found themselves in a back-and-forth battle with Mechanicville in Week 1, scoring with 52-seconds left in the game to pick up the 28-22 victory.

John Mancini carried the ball 10 times for 126 yards and three touchdowns and was 6-for-12 passing for 73 yards and a touchdown.

“The fact that our team was down twice in the fourth quarter and was able to bounce back says a lot about their character,” coach Thompson said. “In addition, we suffered so many injuries that we were, at one point, playing with our third TB, third QB and six sophomores. Through all of that adversity, we still found a way to win. That tells you all you need to know about this group. They are resilient.”

In contrast, three of Canajoharie-Fort Plain’s touchdowns in its 28-20 victory over Mechanicville came as the result of a solid passing game.

“Canajoharie-Fort Plain is very athletic and they have a lot of speed in their skill positions,” coach Thompson said. “Their quarterback [Derek Hyney] is excellent and he has a lot of weapons. They have a lot of players who can catch the football and make big plays. Their offense throws a lot at you and it gives us a lot to prepare for. Their defense is very sound and plays hard. They are a well-coached football team. We certainly have our work cut out for us.”

Coach Hyney said his team must keep the Braves from making the big plays.

“We need do control the big plays by Mancini [quarterback John Mancini] with the legs and his arm,” he said. “They have a solid line with a great run game from the running back as well as quarterback position. Mancini throws very well with good receivers. It will be very important to be as balanced as possible this week and keep them guessing.”

The Braves have been focused this week on cleaning up their performance in preparation to be success in tonight’s key conference game.

“We have to continue to improve in all three phases of the game,” coach Thompson said. “On defense we have to tackle well in the open field and make sure the young, inexperienced players we rely on know their assignments and execute them consistently. Our offense has to get into a rhythm and be well-balanced. Our special teams have to play better.”

Any other week of the season, Canajoharie-Fort Plain would be cheering and supporting the Braves.

“We have a tremendous amount of respect for Fonda and love the rivalry that we have between us as we watch them every week either in the stands or in the paper as we always wish them luck on getting the victory,” coach Hyney said. “But this week we can’t cheer for them as we want the win.”

With both teams coming off season-opening losses, Ballston Spa and Gloversville will square off in the Huskies home opener tonight under the lights at Husky Field at Robert E. Gould Stadium.

The Scotties are coming off a tough 10-6 loss to Queensbury last Saturday, while Gloversville comes into tonight game off a 49-13 loss to Burnt Hills-Ballston Lake.

The Huskies put together a balanced attack against the perennial powerhouse Spartans, passing for 87 yards and rushing for 90 yards.

Senior quarterback Anthony Tomek-Russell passed for 87 yards and two touchdowns and two interceptions in a 7-for-14 effort.

The Scotties managed 39 rushing yards and 88 passing yards against Queensbury with quarterback Keegan Zoller hooking up with Aidon Thomas for a 28-yard touchdown strike.

Amsterdam is coming off a big non-conference victory over Class AA Colonie, but now must turn its attention to a tough Troy squad to defeated LaSalle Institute 40-19 in the season-opener.

Amsterdam amassed 400 yards of total offense against the Garnet Raiders with Peyton Ausfeld scoring three touchdowns while rushing the ball 18 times for 163 yard and making three catches for 99 yards. Cameron Chrzanowski picked up 96 receiving yards and pulled down a pair of touchdown passes.

“Troy is big up front and fast on the perimeter,” Amsterdam coach Doug Edick said. “We need to control the ball on offense and tackle on defense as well as win the special teams. We will need discipline to not make mistakes.”

Last week’s victory over Ravena-Coeymans-Selkirk was exactly what a young Broadalbin-Perth Patriots team needed to put the rest many of the doubts they may have had coming into the season.

“I think it showed them they have the ability to succeed,” coach Jim Pelneau said. “We have a lot to still clean up so that’s been our focus this week, penalties and sloppy play have to go if we are going to succeed moving forward.”

The Bulldogs lost their season-opener to division rival Mohonasen, 58-14.

“They are very multiple in their offensive attack,” coach Pelneau said. “They will run different versions of option and many formations, so we have to be sound on defense this week.”

The Patriots defense was up to the task last week against Ravena, holding the Indians to 28 yards rushing on 26 attempts.

Dante Calderone got the start for the Patriots against Ravena and carried the ball 12 times for 24 yards and passed for 57 yards and two touchdowns in a 6-for-13 performance. Ivan Roberts left the game early in the third quarter with an injury after rushing for 122 yards and a touchdown on eight carries. His status for tonight’s game is uncertain.

For the Patriots to open the season with a 2-0 record, Pelneau said his team needs to “block and tackle better than the opponent. If we do those two things, we will be ok. Any time you step up in classification, it is important we match their physicality.”

The Johnstown Sir Bills and Lansingburgh Knights are looking to put Week 1 way behind them.

The Knights dropped their season opener to Glens Falls 67-6, while the Sir Bills fell to Schuylerville 55-16.

Johnstown will make the trip to Lansingburgh tonight looking to build on some late-game momentum.

“The last couple of drives in the third and fourth quarters we got some stops,” Johnstown coach Tyler Hall said. “They had their backups in but it showed that the stuff we are running works if we execute well. There were some positives late in the game. We didn’t give up and pack it in. Getting those couple of scores at the end was huge for our momentum going into this week.”

The Sir Bills returned to practice this week looking to smooth out the rough edges.

“The big thing so far, our film session showed guys not lining right or blocking the wrong gap,” coach Hall said. “Things that because of the speed and size of Schuylerville we were a little behind on. This week has been just staying with basics and touching up on them and keep executing every single play the way it should be.”

Bradley Brownell turned in a 101 yards overall performance with seven carries for 60 yards and two catches for 41 yards against the Black Horses. Jack Stramezzi carried the ball 12 times for 70 yards, while quarterback Caden Mureness was 9-for-16 passing for 78 yards.

Looking ahead to tonight’s matchup, coach Hall knows his squad will be facing a team that is also looking to put its best effort forward.

“Lansingburgh had a tough opponent the first week so they didn’t look great on film but they are probably going to think Johnstown is just a little school that got beat by five touchdowns,” he said. “It is their home-opener so they are going to be fired up. We have to be ready to go right from the first snap.”

Glens Falls and Schuylerville are slated to face each other in a showdown between the Class B North Division rival tonight at Schuylerville High School.

After Sauquoit Valley put together a seven minute drive to open last Saturday’s game, the Blue Devils stepped up their game to scrape out a 14-8 victory.

Dolgeville heads to Sandy Creek this week for a Friday night matchup.

“We have become use to playing more Friday night games as more teams have added lights to their facilities,” Dolgeville coach Dan Zilkowski said. “The kids are excited for Friday Night Lights. We just need to channel the excitement with many of our younger players.”

The Dolgeville defense rebounded from the game-opening drive to hold the Indians to minus-15 yards rushing and 114 yards passing in a 10-for-23 performance from senior quarterback Colby Jones.

Following the game, coach Zilkowski was happy with the win but not so much the execution, something they worked on this week in preparation for tonight’s game.

“We have focused on the fundamental technique and mental parts of the football game during the week,” coach Zilkowski said. “The players have responded and we emphasize to them to get better every day.”

In their last three meetings, Dolgeville has has positive results, defeating the Comets 62-26 in the 2017 Section III Class D quarterfinals and 66-20 in the 2016 semifinals as well as defeating Sandy Creek 26-25 in the Carrier Dome for the 2014 Class D championship.

“The first challenge of playing Sandy Creek will be the long two hour bus ride to a place that we have not played at,” coach Zilkowski said. “We have met Sandy Creek in many sectional play off games, but this is the first regular season match up with our current coaching staff. They are hard nosed team and we will need to execute our game plan with little error.”

Comparing the Blue Devils success last week to what will be necessary for success this week, Coach Zilkowski said, “We need to limit our mistakes on both sides of the ball. Our special teams play needs to be consistent. I also believe the field position battle will be important. We had many 50-60 yard drives last week that ended up without points. We need to finish those drives with points.”