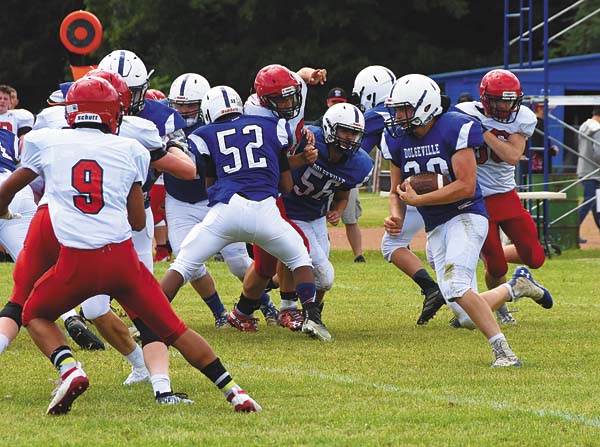 DOLGEVILLE — The season got off to a slow start for the Dolgeville Blue Devils.

Sauquoit Valley opened the game with a time-consuming scoring drive drive and held the Blue Devils scoreless through the opening half.

Halftime adjustments put Dolgeville on track as the Blue Devils offense got rolling, punching in a pair of third-quarter touchdowns to pull out a 14-8 Center State Conference victory.

“They kind of caught us off guard with their offensive play on their first drive,” Dolgeville coach Dan Zilkowski said. “I think they made 14 straight plays without a mistake and for a high school football game in the first week that’s pretty good. We did stop them short of the goal but they were able to punch it in.” 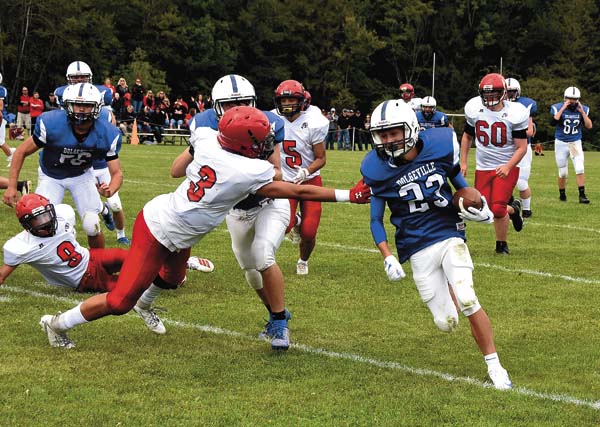 Dolgeville's Connor Morse (23) avoids the grasp of Sauquoit Valley's Jaron English as he rushes for a big gain during Saturday's Center State Conference game at Bill Bynon Field at Dolgeville High School. (The Leader-Herald/James A. Ellis)

Sauquoit Valley quarterback Colby Jones moved the Indians to a first down at the Dolgeville 2-yard line. The Blue Devils dug in and stopped the Sauquoit runners short, setting up a fourth-and-goal inside the 1-yard line.

The Indians came up with a drive-killing interception on the Blue Devils’ first possession but could not capitalize on the play as the Dolgeville defense kept them in check with a pass rush that resulted in Jones being sacked by Jacob Winkler and Jereamie Carpenter Jr. forcing the Indians to punt the ball away.

The Blue Devils put together a drive off after the punt was downed on their 19-yard line. Utilizing running backs Phillip Keeler and Ashton Kluge, Dolgeville moved the ball to the Sauquoit 48 before Connor Morse broke through for a 48-yard run into the end zone, only to have the play called back for a holding penalty.

The Indians defense adjusted and stopped the Blue Devils to take over on downs at their 39 with just over 3 minutes left in the half but could not capitalize on the stop and settled for the 8-0 halftime lead.

The Dolgeville defense began to click on the opening drive of the second half.

Starting on their 29, the Blue Devils utilized senior running back Kyle Getman to engineer an 11-yard drive that came to a halt at the Sauquoit 10 yard line when the Indians forced and recovered a fumble.

The Blue Devils kept the Indians pinned deep in their end, first sacking Jones for a 6-yard loss and keeping the pressure on forcing a pair of incompletions and a punt from the end zone that set Dolgeville up on the Sauquoit 46. Getman opened with a seven-yard run followed by a 22-yard scramble by Gonyea. Getman carried the ball to the nine before breaking through for a 9-yard touchdown run. The Indians defense stopped Getman short of the goal line on the 2-point conversion attempt, leading the score at 8-6 with 3:55 left in the third quarter.

The Blue Devils defense held the Indians to four-and-out, forcing a punt that was downed on the Sauquoit 45 with 2:23 left to play.

Morse and Getman put together back-to-back five-yard runs before Morse got the call, broke a tackle at the 20-yard line and rushed into the end zone for a 35-yard touchdown run to put give the Blue Devils the lead. Gonyea lofted a pass into the back of the end zone to Jason Potts, Jr. for the 2-point conversion and a 14-8 Dolgeville lead.

The Blue Devils defense came up with a big play early in the fourth quarter when Jones hit Chris Callahan with a long completion that the defense forced him to fumble and Keeler recovered on the Dolgeville 37.

The Blue Devils would not add to their score in the fourth quarter, but the defense was p to the challenge as the Indians went to the air looking for a possible winning drive.

They were able to move the ball to the Dolgeville 44 with under a minute to play before a motion penalty and Riley Beaulieu and Keeler sacking Jones for a six-yard loss ended the drive and secured the victory for Dolgeville.

“The second half we made some adjustments,” Zilkowski said. “They wanted to release their wide outs and we were able to shut that down. We brought in a full back [Getman] and he was able to move the ball for us and get our offense going.”

Morse finished with 103 yards rushing and a touchdown for Dolgeville, while Getman added 101 yards and a touchdown and Gonyea added 34 rushing yards. Gonyea was 1-for-7 passing with a 10-yard completion to Morse.

Jones finished with 114-yards passing with a 10-for-23 performance and was held to minus 31 yards rushing. Ray was the Indians’ leading rusher with 11 yards and a touchdown.

Alex Ten led the Sauquoit receivers with three receptions for 54 yards, while Callahan had one catch for 30 yards.

Dolgeville (1-0) will take to the road Friday for a to play Sandy Creek and Sauquoit Valley (0-1) will travel to play Beaver river next Saturday.