Out of Orbit wires the field in Saratoga Dew Stakes 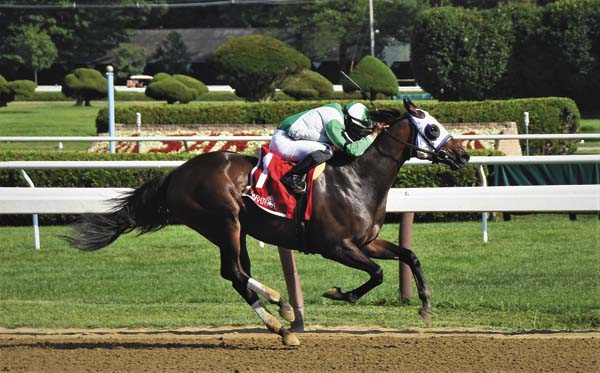 Out of Orbit, with Luis Saez up, leads the field in deep stretch on the way to victory in the 16th running of the Saratoga Dew on Thursday at Saratoga Race Course in Saratoga Springs. (The Leader-Herald/James A. Ellis)

SARATOGA SPRINGS — After two starts of laying off the pace, Out of Orbit went back to her front-running ways and led at every point of call in Thursday’s $100,000 Saratoga Dew for New York-bred fillies and mares at Saratoga Race Course.

Breaking from the rail under jockey Luis Saez, Out of Orbit surged to the front with three-time winner Cartwheel two paths to her outside. She led by two lengths into the first turn with an opening quarter-mile in 23.81 seconds on the fast main track.

Cartwheel began inching her way closer to the pacesetter with the half-mile covered in 49.01, with post-time favorite Lucky Move trailing in sixth position a length back of Held Accountable.

Around the far turn, Saez kept Out of Orbit at a comfortable pace, maintaining her advantage as Lucky Move made a three-wide move from last to try and overtake the leader. Saez began to call on Out of Orbit as the field hit the top of the stretch and she responded by widening her lead to 3 ½ lengths. Lucky Move made a strong effort but Out of Orbit kept her at bay and powered home a 2 ¼-length winner in a final time of 1:54.09.

Completing the order of finish were Cartwheel, Turn and Bern and Fetching.

The win was an eighth stakes victory of the meet for Saez, who leads all other riders in stakes triumphs. Additionally, it was a second stakes win for the Bromans, who the day prior made a trip to winner’s circle with Evan Shipman-victor Mr. Buff.

“I had a good trip. We got away pretty easy,” Saez said. “I knew Lezcano’s filly [Cartwheel] had some speed, but we broke well from the one hole. Last time, when I rode her [June 21, Belmont Park], she stumbled. Today, she broke good and we made the lead. She kicked on well turning for home.”

“I was a little concerned [about stretching out to 1 1/8 miles] about that, but she came in here and really looked good and really was training great,” Serpe said. “Luis [Saez] is just a pro at that because if you’re not getting a breather, that’s one thing. But he slowed it down like he always does on the backside, and that filly can go at that pace anytime. My concern was holding on in the stretch, because I knew that Held Accountable would be coming.”

Serpe was full of praise for runner-up Held Accountable, who arrived at the Saratoga Dew from a third-place effort in a July 26 optional-claiming event at Belmont Park off of a seven-month layoff.

Bred in the Empire State by her owners, Out of Orbit is by Malibu Moon out of the stakes-placed Discreet Cat broodmare Kibosh.

Live racing resumes today at Saratoga with a 10-race card highlighted by the $100,000 Tale of the Cat. The first post is slated for 1 p.m.