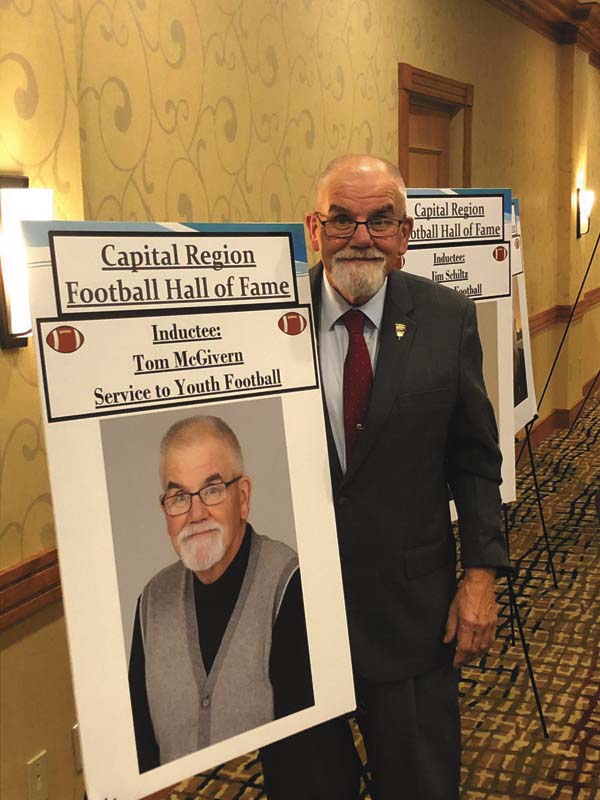 Tom McGivern was among those inducted into the Capital Region Football Hall of Fame on Aug. 3. (Photo Submitted)

ALBANY — A total of 13 players, six coaches, an official, two veteran media members and the 1953 Nott Terrace championship team made up the Capital Region Football Hall of Fame class of 2019, the 10th anniversary class of former Section II greats.

“The opportunity to honor the great accomplishments of these Capital Region high school greats is really special for our committee and me,” said Nick Fitzgerald, president of the Capital Region Football Hall of Fame, in a news release. “The players and teams represented, as well as the time and effort of the coaches, officials and service awardees speak to the depth and quality of football in our region.”

The Hall of Fame was established in 2010 with the mission of honoring the great players, coaches and those who have promoted football in our region. Since its debut, the Hall has welcomed more than 240 Section II greats, many of whom have gone onto college and professional careers.

∫ BILL GOEBEL — In four years at Fonda-Fultonville High School, he earned 12 varsity letters, including four in football. A four-time league all-star as a kicker, and 1992 State Class C player of the year, Goebel was recruited to the University of Pennsylvania. At Penn, he was a two-time all-league honoree and helped the 1993 team to an Ivy League title.

∫ VINCENZO NICOSIA — In his Amsterdam High School career, he was a three-year starter at receiver and safety and a two-time captain. First team All-State in his senior year, he played four years at Colgate University, where he was a multiple-time Patriot League rookie and player of the week.

∫ JIMMER BENNETT — A four-year starter at Albany Academy, at one point, he owned every major Cadets receiving record. Heavily recruited, he chose Union College, where he enjoyed an outstanding four-year career with the Dutchmen.

∫ SCOTT BISHOP — Earning the Hudson Falls High School starting tailback role as a sophomore, he led his team to its first-ever Section II title in his senior season. He continued that success in his first year at SUNY Cortland, where he also earned a starting role.

∫ LLAN DURKOVIC — A three-year varsity player at Ballston Spa High School, he was a starter at end, and the first-string kicker and punter in his final two Scotties seasons. He caught 42 passes (seven TDs) in three seasons at Boston University and signed as an undrafted free agent with the New England Patriots in 1972.

∫ BOB FRIEDLUND — A four-sport star (football, basketball, baseball and track) at Nott Terrace High School, he later starred for Michigan State College (now University). That led him to a contract with the Philadelphia Eagles, where he played two games.

∫ DAVE FRUSCIO — His football success earned him the 1962 Player of the Year award at LaSalle Institute. After his playing days (which included several pro-baseball tryouts), he turned to coaching in Pop Warner, CYO and Little League.

∫ TONY FRUSCIO — A two-time area player of the year at Watervliet High School, he was a first-team all-state pick in his senior year. Recruited to SUNY Cortland, he was among the top five tacklers in each of his three seasons there.

∫ WALTER JONES — In each of his three years of starting on the offensive and defensive lines at Glens Falls High School, he was named all-league and all-area. At the University of New Hampshire, he was a four-year starter and, in his senior year, an All-American.

∫ PAUL LAYTON — A three-year starter at quarterback for Burnt Hills-Ballston Lake High School, he was the State player of the year in his senior year. His kicking ability took him to the University at Albany where he was all-conference twice. He played his final college year at Temple University and earned a mini-camp tryout with the Green Bay Packers.

∫ ED MEIXLER — A three-year, two-way starter at offensive guard and defensive end at Saratoga Springs High School, he earned a full scholarship to play at Boston University. Named BU’s captain and team MVP in 1964, he was drafted by the AFL Boston Patriots.

∫ MARC MIRANDA — He didn’t start playing football until his junior year at Mechanicville High School, but immediately became a starter at receiver, corner, and returned kicks and punts. Player of the year in his senior season, he finished his career with more than 2,600 yards receiving and 18 touchdowns.

∫ DAN VERGINE — A starting tailback in all three of his seasons at Ballston Spa High School, he broke several school records including yards in a game (315), season (1,965), and career (2,678). He played a season each at Alfred State University and Hudson Valley Community College, scoring 21 touchdowns before an injury ended his career.

∫ BILL HIGGINS (official inductee) — His career as an official started in 1959. He’s called multiple high school Super Bowls and State title games at the Carrier Dome. He is an American Football Hall of Fame honoree and continues to contribute to the game as an officials’ assignor for multiple leagues.

∫ JIM SCHLITZ (service to football inductee) — Since 1987, he has been the lead high school sportswriter at the Daily (Schenectady) Gazette, joining the paper a month after his graduation from SUNY Oswego. In 2017, the New York State Football Coaches Association recognized him for his outstanding work.

∫ GARY HOLTZ (assistant coach inductee) — One of the first Hudson Valley Community College football players to earn a Division I scholarship (University of Vermont), he started his coaching career in 1974 at HVCC. That career continued for 34 years at two high schools (Columbia and Burnt Hills) and two colleges (HVCC and Union College)

∫ DAVE BOCHETTE (service to football inductee) — He started as a Pop Warner coach before transitioning to high school at Lansingburgh High School, where he stayed for 16 years. That led him to Hudson Valley Community College and the Albany Conquest (AF2) where he served as both an assistant and head coach.

∫ STEVE GRANDIN (service to football inductee) — A member of the New York State Sportswriters Association for 42 years, his long-time research efforts are behind the State high school ranking system and all-State football and basketball selections. He also played a huge role in the reestablishment of the Section II record book, and held leadership roles in several newspaper sports departments.