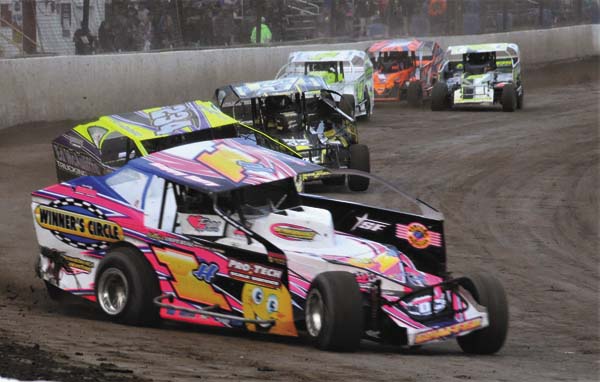 Harry Shaffer leads the pack during 602 sportsman action Saturday at Fonda Speedway. (The Leader-Herald/James A. Ellis)

FONDA — Danny Varin powered his way to the front of the pack to win the 30-lap modified feature Saturday night, but at the end of the night it was Rocky Warner who celebrated as the 2019 track champions were crowned at Fonda Speedway.

Hollenbeck was the lone repeat champion out of the group, while Hartman Jr., Horning, Samrov and McAuliffe all were first time championship winners.

The night’s racing action was delayed by a series of showers passing over the speedway, but also made the racing surface fast as the modifieds turned lap times in the low 19-second range late in the 30-lap feature. 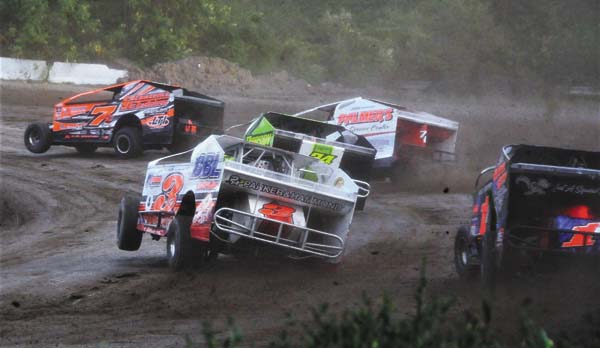 Korey Wilder and Cody Bleau broke out in front to set the early pace in the modified main event, swapping leads through the opening nine laps.

David Constantino charged to the front of the field on lap 10 with Bleau moving into second with Jessica Friesen, Danny Varin and Warner making up the top five.

The caution flew on lap 13 when Bobby Varin slowed on the back stretch. He was able to make quick repairs and rejoined the race at the back of the pack.

Constantino’s night came to an end on the restart as he caught the rear wheel of Bleau’s modified and slammed hard into the backstretch wall.

Danny Varin made a strong move after Warner got past him on the restart to split Friesen and Warner exiting turn two and settling in behind Bleau. 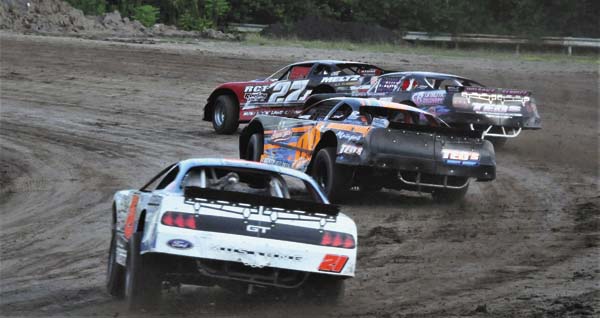 Two laps later on a restart, Varin broke out in front and built a sizeable lead that Warner could not erase before the checkers dropped over the hood of the T-Rex Express No. 93 for his second Sunoco Fuels modified feature win of the season and 10th of his career at Fonda Speedway.

Warner was second followed by Bleau, Friesen and David Schilling. Bobby Varin, who finished second in the points standings, got back up to finish sixth with Michael Maresca, Craig Hanson, Brian Gleason and Josh Hohenforst rounding out the top 10.

Chuck Dumblewski led the opening 18 laps of the 20-lap pro stock feature and looked headed for victory before the caution flew for debris on the speedway setting up a two-lap shootout for the victory.

Horning, who was running a distant second, used the restart to his advantage and took over the top spot and held off the pressure from Dumblewski to notch his fifth win of the season and lock up his first Fonda Speedway track championship. 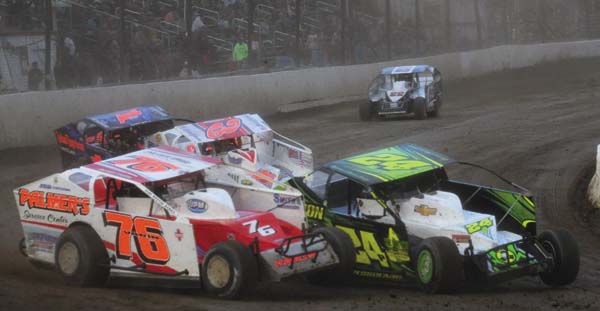 E..J McAuliffe secured his track championship in the limited sportsman division with his fifth victory of the season followed by Rich Christman, Alan Hanson, Steve Wagoner and John Young.

Cliff Haslun collected his first win of the season and fifth of his career in the street stock division. Samrov made a late-race charge to finish second, Mike Arnold third, Dave Horning Sr. fourth and Josh Samrov fifth.

Fonda Speedway will take its annual break for the Fonda Fair and return to action on Sept. 14 before closing out the season with the three-day Fonda 200 Weekend on Sept. 26, 27 and 28. 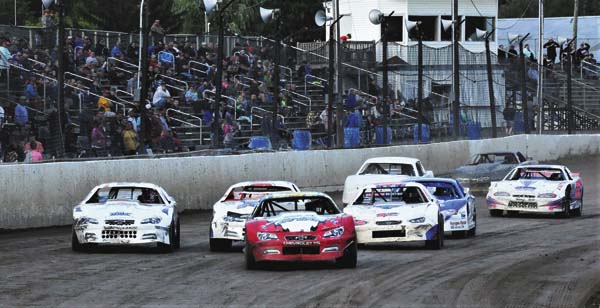