Saturday’s cancelled card to be run today at the Spa

Wow Cat back on the prowl in G3 Shuvee 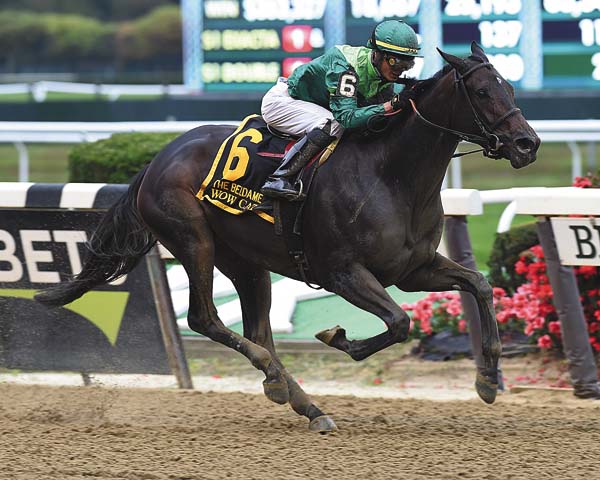 In addition to the Shuvee, today’s 13-race Saratoga offering will include the entirety of Saturday’s card, which was cancelled in anticipation of excessive heat, along with a steeplechase allowance race that was cancelled due to rain on Wednesday.

Wow Cat is one of two entrants trained by Chad Brown, along with Electric Forest, who is cross-entered in Saturday’s Grade 1 Molly Pitcher at Monmouth Park. The Chilean-bred Wow Cat has made her last three starts in Grade 1 company, including a win in the 2018 Beldame Invitational at Belmont Park in October.

The 5-year-old Lookin At Lucky mare will make her seasonal debut in the nine-furlong trip over the Saratoga main track from a rallying effort to be second in the Breeders’ Cup Distaff on November 3 at Churchill Downs, when last-of-11 in the early running.

“That day she ran really, really well,” said jockey Jose Ortiz. “I wish I could have been a little closer. She was also a little wide going into the first turn, so I decided to take her back. I go out on the same set as her in the morning and she looks very good.”

Stonestreet Stables’ homebred Electric Forest, a dark bay daughter of Curlin, has won 3-of-5 starts, including a last-out score in the Grade 3 Doubledogdare in April at Keeneland.

Hall of Famer Javier Castellano has the call from post 8.

The Elusive Quality bay, bred in Kentucky by Godolphin, arrives at the Shuvee from a grueling third-place finish in the Grade 2 Fleur de Lis, won by Elate.

She’s a Julie will depart from the inside post under Ricardo Santana, Jr.

Summer Wind Equine’s Golden Award, a 4-year-old daughter of Medaglia d’Oro trained by Hall of Famer Bill Mott, boasts a record of three wins and three seconds from eight starts. Last out, in the Grade 3 Allaire DuPont Distaff at Pimlico, Golden Award missed by a nose to Mylady Curlin.