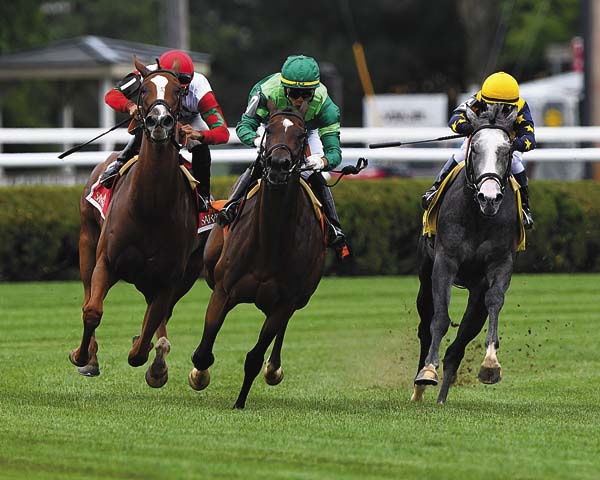 SARATOGA SPRINGS — Chad Brown had saddled the first, second and third-place finishers in a stakes race before at Saratoga Race Course. But on Friday, the two-time Saratoga leading trainer knew he would be taking a trip to the winner’s circle even before his trio of contenders loaded into the gate, as his charges were the only entrants in the 24th running of the Grade 3, $150,000 Lake George won by Paul Pompa, Jr.’s Regal Glory by a half length.

With four of the seven entered horses scratching, the slight 6-5 favorite Blowout surged to the front, with stablemates Dogtag and Regal Glory following through an opening quarter-mile in 24.99 seconds and the half in 48.66 on the firm inner turf.

Under jockey Luis Saez, Regal Glory was urged coming out of the final turn and, once straightened for home, overtook Blowout and Dogtag from the outside and fended off Blowout’s final-furlong push, completing one mile in 1:36.23.

“I just wanted to move her out a little bit because she has a big turn of foot in the stretch and everything was perfect,” said Saez, who has won the last three stakes at Saratoga. “She always tries hard. Last time was an impressive win, and I really liked her today. I knew that I would have horse in the stretch.”

Off as the longest price on the board at 2-1, Regal Glory won her second consecutive stakes, building on a 2 ¾-length score in the Penn Oaks on June 1 at Penn National. The Animal Kingdom filly returned $6.60 on a $2 win wager. The Kentucky homebred has never finished worse than second in six career starts, improving to 4-2-0 and increasing her career bankroll to $356,750.

“It’s never happened before and it’ll probably never happen again, so it was definitely unusual, but we’re happy,” Brown said. “All three fillies seemed to run well, and Regal Glory just had a little more today.”

It was the fourth time since June that Brown trained the top-three finishers in a stakes at a NYRA track and the second time in six days at the Spa, with Sistercharlie besting Rushing Fall and Homerique in the Grade 1 Diana on July 13. On June 22, Blowout won the Wild Applause at Belmont Park, followed by Nova Sol and Seek and Destroy. Brown also was on hand when Bricks and Mortar, Robert Bruce and Raging Bull finished 1-2-3 in the Grade 1 Manhattan on Belmont Stakes Day, June 8.

“This time around, what I did was I told all the jockeys, ‘Look, just try to ride your own race and do the best you can to win. Outside of that, if you want to talk to your individual clients or representatives that are here today, please do so and draw up a plan.’ I didn’t give any instructions other than that,” Brown said. “I thought that was the fairest way to do it, only because it was my horses in the race. As it turns out, I thought all three fillies ran pretty well.”

Peter Brant’s Blowout also kept her streak of finishing in the top-two in every start alive, besting Dogtag by 1 ¾ lengths. The British-bred daughter of Dansili, who picked up the services of jockey Jose Ortiz for the first time, is 2-3-0 in five starts.

“She broke really well and we went on and she relaxed well. I asked her to go and she gave me a great run, but Regal Glory ran her down,” Ortiz said.

Dogtag, who also was 6-5 to be the slim second-choice, is a two-time stakes winner. The War Front filly won last out in the one-mile Hilltop on May 17 at Pimlico and broke her maiden at Saratoga last August by capturing the P.G. Johnson.

“Everyone in the race had a pretty clear trip,” said Hall of Famer and Dogtag jockey Javier Castellano. “Unfortunately for my horse, I don’t think she liked being that loose. She needs more pace in the race. She broke so well out of the gate, and I didn’t want to take anything away from her. We were tracking well, but she didn’t kick on in the end. Unfortunately, the race didn’t set up for me well today.”

Added Brown: “I thought these horses were so close. Maybe the odds were a little off, but these horses are so close, that’s why they were all in this race. I do my best to really treat the horses individually and give them the best chance to run in the races they’re supposed to run in individually, and these three horses really fit the Lake George well. That’s why they were here today.”

With racing cancelled today due to expected excessive heat in the Saratoga and Capital Region, live racing will resume on Sunday with a loaded 13-race card that will include the rescheduled Grade 1, $500,000 Coaching Club American Oaks in Race 4, the $200,000 Caress in Race 11 and the Grade 3, $200,000 Shuvee in the finale. First post is set for 12:20 p.m. Eastern.