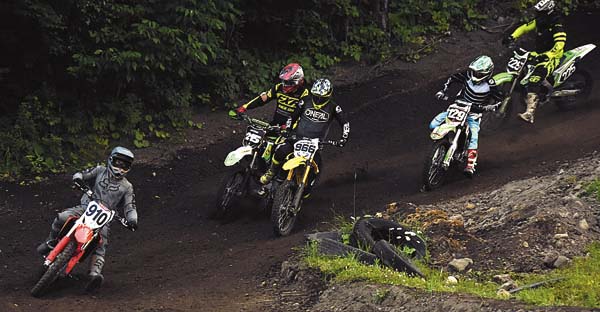 Having hosted a two-day Central New York Motocross Racers Association event Saturday and Sunday, Royal was back in action Wednesday.

Several area riders picked up wins in their respective classes. 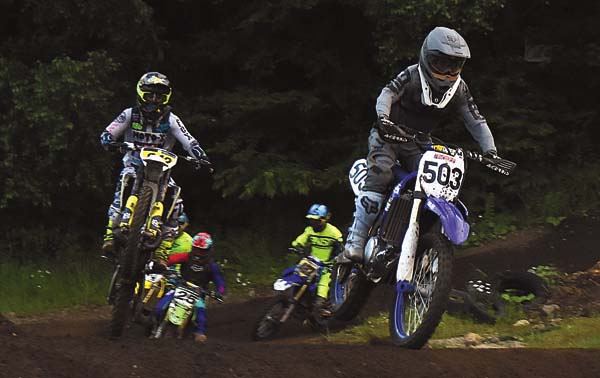 Salvatore Attigliato (503) leads Nicholas Debernardis (842) and the field during the first moto for the 122-open amateur division during Monster Energy Drink Supercross competition Wednesday at Royal Mountain Ski Area in Caroga Lake. (The Leader-Herald/James A. Ellis)

Miller won the quad schoolboy class. She also was second in the pit bike class.

Petersen won the schoolboy class. He also was second in the 122-250 amateur class and fourth in the 122-125 two-stroke class. 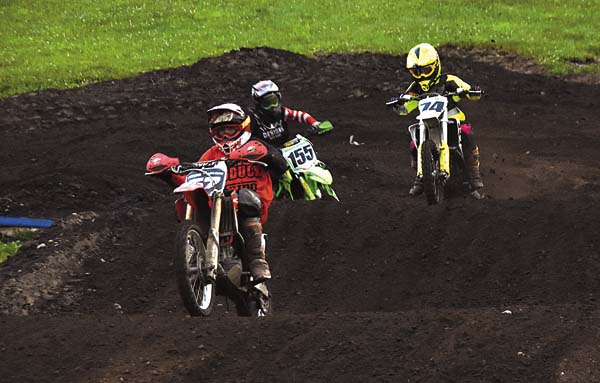 In the 122-125 two-stroke class, Gloversville’s Devin Buyce was third and Johnstown’s Hayden Zelich was fifth. Buyce also was second in the schoolboy class, while Tribes Hill’s Matheu Dettenrieder was fifth.

Johnstown’s Casey Battisti was second in the 122-250 expert class.

Johnstown’s Kip Simonds was fourth in the 50cc 7-and-8-year-old class, while Gloversville’s Evan Darling was fifth.

Dolgeville’s Jim George was second in the mini 60 7- to 11-year-old class and Pattersonville’s Eason Baker was fifth.

In the mini quad 50cc class, Ethan Cornell was second and Fonda’s Tyler Miller was fourth.

In the pit bike class, Broadalbin’s Shane Porter was third and Mayfield’s Nicholas Warner was fifth.

In the plus-40 amateur class, Stratford’s Tom Hogan was second and Hagaman’s Joe Kulewicz was fourth.

Mayfield’s Andrew Ashbey was second in the quad novice class, while Gloversville’s Tyler Rizzo was fourth in the mini quad 51-90cc class.

Royal will continue its busy stretch Sunday as it will host its 35th annual Monster motorcycle, ATV and snowmobile hillclimb.

All hillclimbers must be signed in by 10 a.m. with hillclimbing at 11 a.m.

The event is the highlight of the racing season at Royal with more than 200 of the fastest hillclimbers in the country on hand. It is a points-paying event for the New England Hillclimbers Association and the only time they come to New York.

The classes to be run range from 50cc to open, senior multi-cylinder.

All hillclimbers get two tries at the 700-foot hill with the fastest time counting.

Awards are given for the top four in each class and the fastest time of the day. Bike judging also is a part of the the hillclimb at Royal.