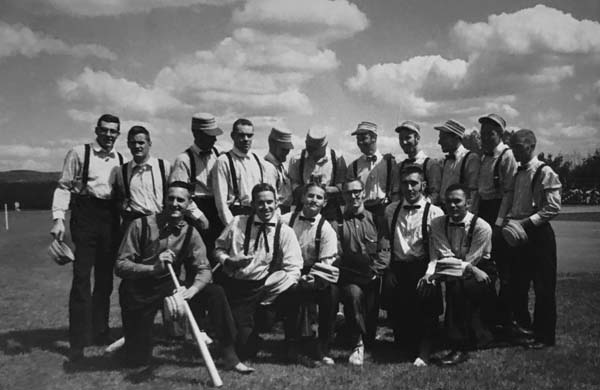 Bill Pozefsky poses with his team at the centennial game. (Photo courtesy of Bill Pozefsky)

The game of baseball is one that is rich in history and its milestones are revered and commemorated.

On June 19, 1846, the first officially recorded baseball game in U.S. history took place in Hoboken, N.J., between the “New York Nine” and Alexander Cartwright’s “Knickerbockers” of New York City. In 1857, the sports first governing body was formed under the name of the National Association of Baseball Players. While the National League would not be formed until 1876, the game was already being referred to as “the national pastime.”

Another notable first for the sport took place on July 1, 1859 in the form of the first intercollegiate baseball game. In Pittsfield, Mass., a team of 13 players from Amherst College (Amherst, Mass.) played a team of 13 players from Williams College (Williamstown, Mass.). A prior meeting between representatives of both schools created a two-day social event between the schools, and chose Pittsfield, Mass., as a “neutral site” for the events. At the urging of the Williams student body, a chess match was added to the event to provide “a trial of mind as well as muscle,” while promoting the sport of Base Ball throughout New England.

The game was played by Massachusetts Rules (Town Ball), which was a direct descendent of the British game of rounders. This type of game was a stepping stone towards modern baseball and some of the notable differences compared to today’s game included; 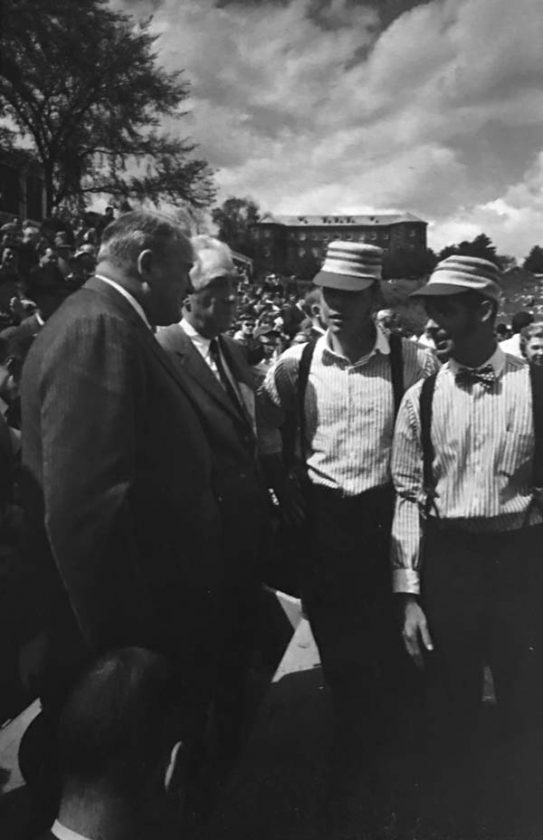 — No out of bounds (balls could be hit sideways and backwards)

— The Striker (Batter) stood in a space 4′ in diameter, that was halfway between the first and fourth Bases

— The Thrower (Pitcher) stood 35′ from the Striker

A bat from the centennial game is pictured. (Photo courtesy of Bill Pozefsky)

— One out ended an inning

— The game ended when one team reached 100 tallies (runs), or a predetermined score (regardless of the number of innings or time it took)

The 1859 intercollegiate game between Amherst College and Williams College was set at a 65-run limit. After playing 26 innings, Amherst easily beat Williams by a score of 73-32. While the game went 26 innings (and surpassed the agreed upon 65 runs), due to the one out innings, the game took only 3 ½ hours to play. Amherst also won the Chess Match.

In 1939, the sports world would converge on Cooperstown to celebrate the 100th Anniversary of Abner Doubleday’s alleged invention of the game in Cooperstown in 1839. Whether you agree with Doubleday’s role in the “first game” or not, 1939 marked a year-long celebration of the sport that was highlighted by the dedication of the National Baseball Hall of Fame and Museum.

Twenty years later, college baseball would follow Major League Baseballs lead and celebrate its own centennial in 1959. For the entire season, every college player across the country wore a special centennial anniversary shoulder patch on their uniforms. The high point of the season-long celebration took the form of an “Intercollegiate Baseball Centennial Game” on May 16, 1959, when players from both Amherst and Williams faced off almost exactly 100 years after their initial meeting. Once again, 13 players from each school dressed in period authentic uniforms (1859) to reenact their original contest playing by the same Massachusetts Rules that were employed during their first encounter. 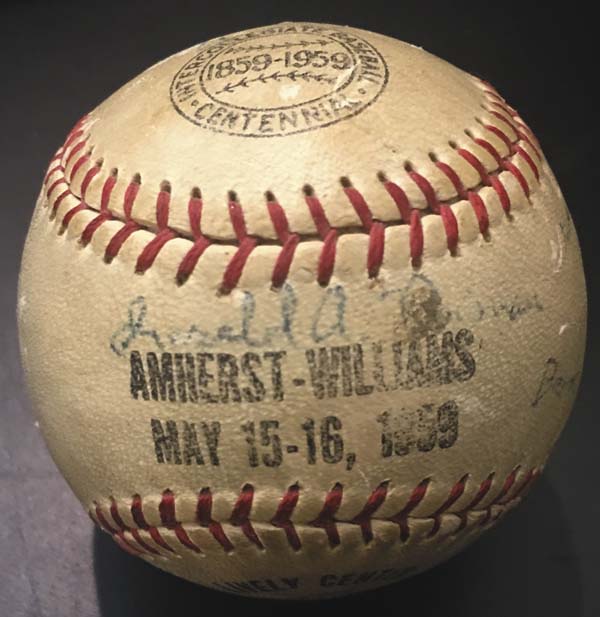 A ball from the intercollegiate baseball centennial game on May 16, 1959 is pictured. (Photo courtesy of Bill Pozefsky)

This time the game took place at Amherst College in front of 3,500 spectators as a preliminary game between both schools varsity baseball teams. Since the regular members of each school’s varsity teams were playing in the regular season game that afternoon, the players for the centennial game were made up of members of each school’s student bodies.

According to 1955 Gloversville High School graduate Bill Pozefsky (who was attending Amherst at the time), “one of my friends was the sports editor of the Amherst College newspaper. He was tasked with putting the team together and made an announcement naming players each week in the schools bi-weekly publication. The editor purposely chose students that he knew were athletic and would do a good job representing Amherst College in a real-game of baseball, playing by the challenging 1859 Massachusetts rules.” Pozefsky was the second player chosen to represent Amherst, and he grew a waxed mustache and sideburns for the occasion. Pozefsky, along with all the players on both teams were clad in old style uniforms, including suspenders. Each player used a special Louisville Slugger Bat created for the event (not much bigger than a broom stick handle) by the Hillerich and Bradsby Company, and utilized special 7″ circumference baseballs created by A.G. Spalding and Bros. Incorporated. And just like 100 years prior, a Chess game took place between three-player teams from both schools on the sidelines.

Coleman was the 1949 American League Rookie of the Year, 1950 World Series MVP and elected to the Hall of Fame in 2005 (Ford C. Frick Award). A Centennial Dinner held for both teams the night before at Williams College also featured Baseball Hall of Famer (1947) Frankie Frisch as the speaker. Frisch enjoyed a 32 year career as a player and manager, and was a teammate of Gloversville’s George Burns with the New York Giants for the 1919 through 1921 seasons.

According to Pozefsky, “we started to realize what a big deal this game was because so many big shots were there. When you have guys like Cronin, Giles, Frick and Coleman, who had probably never stepped foot on the Amherst campus before show up, it speaks to the magnitude of what a historical event this turned into. The top sporting publications of that era, as well as the New York Times had photographers there taking pictures and doing stories. It really was something special to be part of”. With his parents (Harry & Hannah) in attendance cheering him on (and taking lots of pictures) Pozefsky played on the left side of the infield and is credited with a hit in the game. Despite his Amherst teammate’s efforts, Williams College “corrected” their loss in the 1859 game by winning the Centennial Game by a score of 11-5. Amherst was successful in defending their standing with the “trial of mind” portion of the competition by once again prevailing in the Chess games. 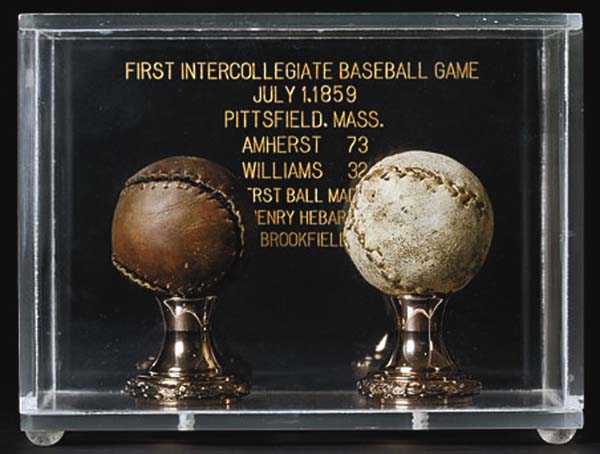 To experience a vintage game like the one played by Pozefsky and the Amherst and Williams teams back in 1859 & 1959, consider attending the next Parkhurst Field Vintage Game that is taking place on Saturday on Harrison Street in Gloversville. It will be part of the Fulton County Baseball & Sports Hall of Fame inductions. Set to square off are the Mountain Athletic Club of Fleischmann’s New York and the A., J. & G’s of Upstate New York. The A., J. & G’s (JAGS) are a squad of former Gloversville Little Leaguers (now grown men).

The local JAGS squad will be wearing commemorative A., J. & G uniforms that match those that the team wore 112 years ago when A., J. & G Park (Parkhurst Field) was in its professional hey-day in 1907. Gates open at 11:30 and the vintage game will begin at noon.

In addition, the Fulton County Baseball & Sports Hall of Fame will be inducting five new members to their Hall of Fame between innings. Set to be inducted are Johnstown’s Brian Mee (former Chicago Cubs prospect), Fred Webb (former Pittsburgh Pirates prospect and 1941 Gloversville Glover), F. Rulison and Sons (for their role in supplying white baseball leather to MLB), and baseball glove and sporting goods manufacturers J.A. Peach Sporting Goods Company and M. Denkert & Company. Mee will be on hand to accept his HOF plaque, as will family members and former employees of Webb and the three former Fulton County based sporting goods manufacturers. Admission will be a $5 donation to the Parkhurst Field Foundation renovation project and Little Leaguers wearing their uniforms will be admitted for free. For more information about the inductions and event, visit www.parkhurstfield.org .

A special ‘thank you’ to Bill Pozefsky (Amherst College Class of 1959) for sharing his memories of the historic 1959 Collegiate Centennial Game. Many in the area will remember Pozefsky as one of the former partners in the Spray Nine Corporation of Johnstown, along with his Brother Mike (Pozefsky) and Ed Brown. Today, Pozefsky is a practicing attorney in the law office of Pozefsky, Bramley & Murphy in Albany New York. 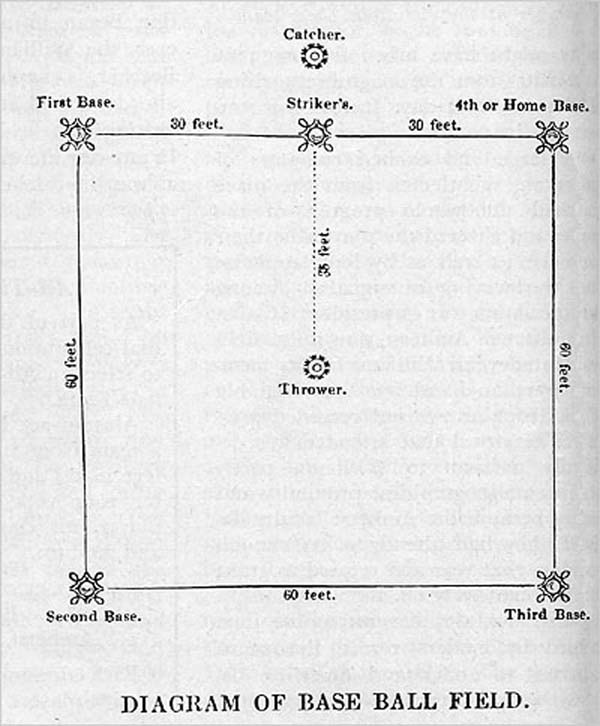 A diagram of an early baseball field is pictured. (Photo courtesy of Bill Pozefsky) 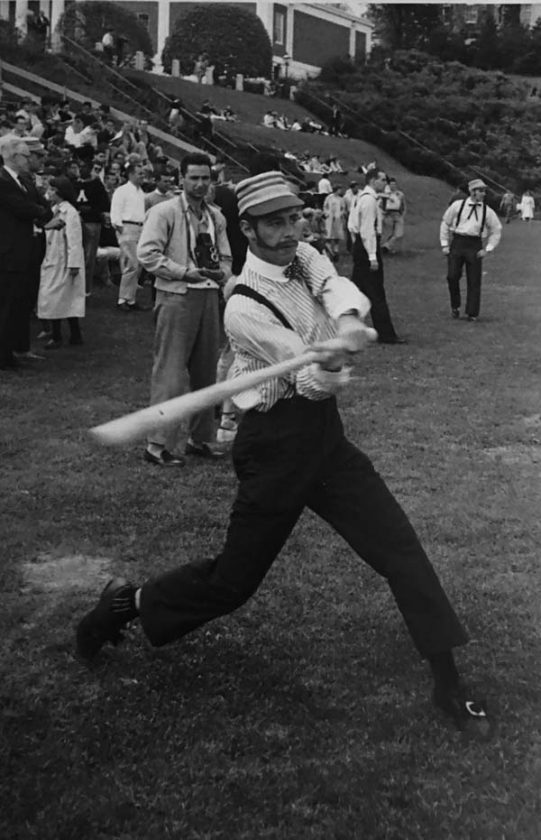 Bill Pozefsky swings at a pitch at the centennial game. (Photo courtesy of Bill Pozefsky)

Hall of Fame dinner postponed to 2021

With the health and safety of attendees in mind, the Greater Capital Region Track, Field and Cross Country Hall of ...

FONDA — After a wet Saturday forced the cancelation of the regularly scheduled program at Fonda Speedway, the ...

JOHNSTOWN — The athletic fields at the Fulton-Montgomery Community College campus would normally be abuzz with ... 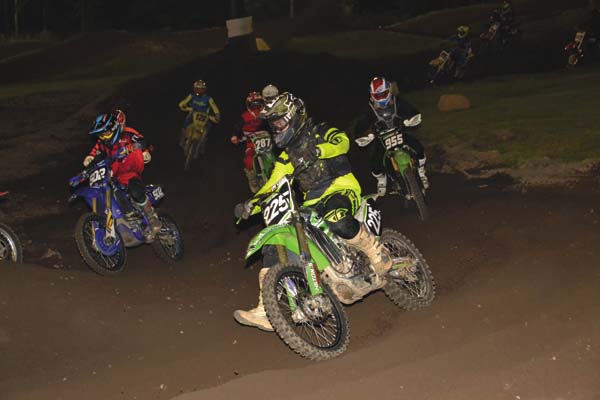