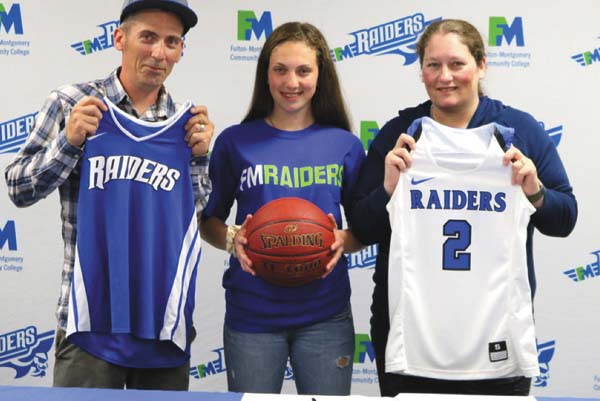 Daley Jo Christman, center, is pictured with her father, Matthew, and her mother, Charlotte, after signing her letter to intent to attend Fulton-Montgomery Community College. (Photo submitted)

JOHNSTOWN — FMCC recently announced the addition of Daley Jo Christman to its women’s cross country program for the 2019 season. Christman is a senior at Gloversville High School and signed her letter of intent June 5 in front of family and friends. She will play a major role running for the Lady Raiders squad in the fall. Christman also plans to play on the women’s basketball team as well. Christman will have an immediate impact for the Running Raiders. She was a first-team Foothills Council all-star this season and a three-time cross country MVP. Christman also received the Most Outstanding Runner presented by Fulmont Roadrunners Club. Christman played an integral role on the Gloversville girls basketball team and received the most improved award.

“I am thrilled to have Daley Jo on the squad and I am really looking forward to seeing what she can bring to the women’s team this year,” said FMCC cross country coach Nate Bartman.