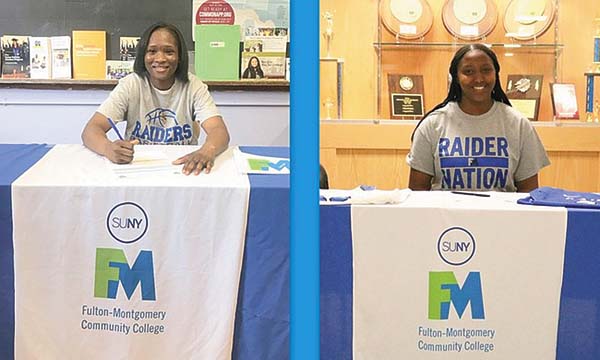 Fulton-Montgomery Community College recently announced the addition of Djenaba Ndiaye, left, and Hasijina Gaddy to the women’s basketball program for the 2019-20 season. Ndiaye attends Bayard Rustin Educational Campus in New York City. Djenaba averaged 19 points, 3 rebounds and 2 assists per game. Gaddy is a senior at Albany High School and played an integral role for the Falcons this season. She averaged 10 points per game along with 9 rebounds per game. “Jenna is a scorer who will fill in nicely on both ends of the floor.  Her scoring, along with strong defense will be a factor for the Lady Raiders in 2019,” FMCC coach Kevin Jones said. “Hasijna played a big role for a very good class AA Albany High team. Her inside presence and scoring was a boost to the team down the stretch during sectionals. She is a strong player and will fill many roles for us this upcoming season.”