Racing Around: McGrew Jr. moving up this season 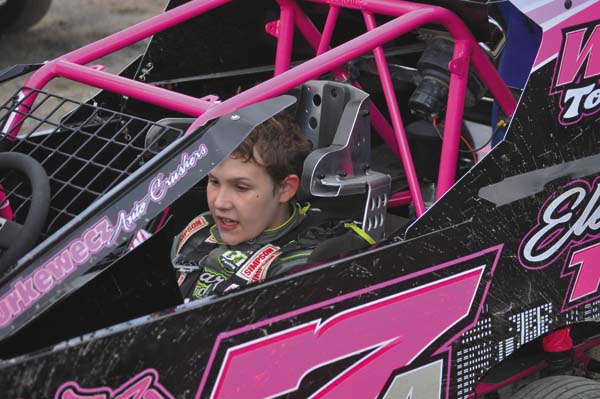 Although he had plenty of success in the division as a competitor, he is not stepping back. Instead he was helping out Adrianna DeRocher by taking her No. 7A out for a run and giving his feedback to the crew to help her have a successful 2019 season.

Instead the 11-year-old Ballston Spa driver has moved up from the limited sportsman division in which he won 17 features between Fonda, Glen Ridge and Albany-Saratoga in 2018 to go with track championships at Fonda Speedway and Glen Ridge, to the 602 sportsman division.

“We are definitely going to be running Albany-Saratoga on Friday nights, not sure about the rest of the season but we have been running at Airborne Park in Plattsburgh and, as of right now, we are going to run at Utica-Rome on Sundays. If we get a ride somewhere, we will take the ride.”

The first couple of events at Airborne, McGrew picked up a ride and was impressed with the track and facility.

“The first two weeks we drove Bucko Branham’s car up there but he doesn’t have the time to do it all because he has to work,” McGrew said. “I will probably race my car when we go up there. It is a really nice track and they are doing a good job up there.”

The move up in class was a natural progression in the learning curve for McGrew.

“I wanted to move up the middle of last year but opted to stay in the Limited Sportsman and learn more before moving up this year,” he said.

With a slew of sponsors continuing to support McGrew and the addition of new ones including Lazzaro’s Auto Body, the season holds a lot of promise.

“Same car [DKM Cyclone chassis] as last year. We have another car but just haven’t put it together yet,” McGrew said. “Hopefully we can get a couple of wins in the sportsman and maybe get a ride from somebody in a small block. But that is not in our budget, we can’t afford that kind of motor right now, so hopefully we can drive for someone.”

One thing is for certain, his biggest fan, chief mechanic, crew chief and dad, Derrick McGrew, will be by his side as he has been since McGrew Jr.’s go-kart days.

“I learned a lot from my dad,” McGrew Jr. said. “He is the one who got me started and I couldn’t do this without him.”

Cars hit the track at The Ridge

With a handful of drivers on hand, the cars took to the track for the first time this season.

With the rain-out again at Utica-Rome, sportsman driver A.J. Filbeck, of Broadalbin, opted to make the trip to The Ridge instead just to get time behind the wheel of the A-1 sportsman.

“It felt good to get back in the car,” Filbeck said. “It has been a rough start to the season.”

Filbeck said the team will be running weekly at Utica-Rome and have plans to run the VP Racing Fuels Summer Shootout Series at Utica-Rome, Albany-Saratoga and Lebanon Valley Speedways.

“We are going to try to run the series,” Filbeck said. “I am really looking forward to running at Lebanon Valley for the first time.”

I am looking forward to seeing how full the grandstands will be Saturday at Fonda Speedway as track promoter Brett Deyo had dropped the general admission price from $11 to a single dollar for a full regular Saturday night program.

With a capacity crowd anticipated, parking could be a challenge. Parking in the main lot behind the grandstand, as usual, is free and when the main lot is full, parking moves across the street where there is a $5 fee as a fundraiser by the Fultonville Reformed Church to benefit #woodwardstrong and Josh and Chelsea Woodward. Pro Stock driver Alicia Hughes also plans to change her number from 730 to 5% as the Woodward Strong car and will donate her winnings from the night to the family.

Lew Boyd of Coastal 181 will be on hand at Fonda May 18 selling books from his racing bookstore, including the book FONDA! ($25) at the Fonda Speedway Museum in the afternoon.