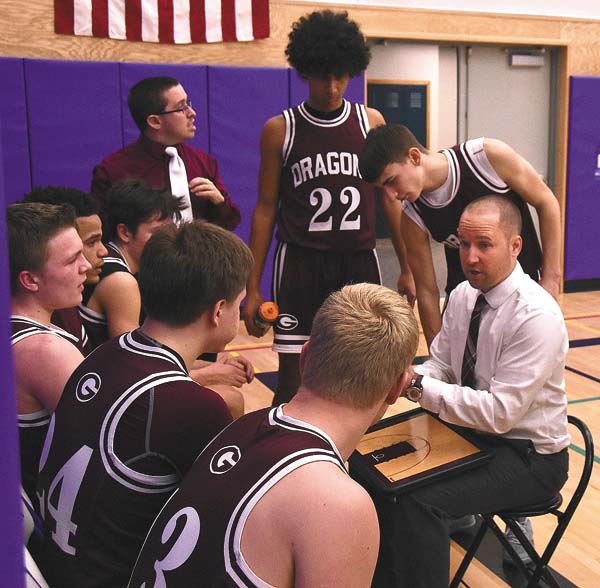 Gloversville coach Aric Kucel talks to his team in a timeout during Tuesday's Foothills Council game at Johnstown High School. (The Leader-Herald/James A. Ellis)

GLOVERSVILLE — At the start of the 2016-17 high school basketball season, Gloversville coach Aric Kucel looked out at his starting lineup for the Dragons in their season opener against Ravena-Coeymans-Selkirk then turned to an assistant coach and asked “Have we done the right thing?”

The lineup consisted of three freshmen, a sophomore and a senior against an Indians squad that towered over the young players.

RCS prevailed with a 65-59 victory that day but it was the start of a journey for the three freshmen, Dante Bouchard, Joey Rowback and Anderson Jones, that has brought them from a 7-14 record that season to a 17-1 mark so far this season and a shot at a share of the Foothills Council championship on Monday night.

“I have always been a big picture kind of guy,” Kucel said. “I saw these guys developing. I have seen them since they were in first and second grade. Just seeing how the worked and how dedicated they were, it was a decision where if I bring them up, I am going to stick with them because of how committed they are. If they are that committed I am going to be committed to them. They earned their spots that freshman year and they earned their time. It was one of the best decisions I have made as a coach.”

Gloversville will square off against defending Foothills Council champion Glens Falls (16-0 Foothills) for a shot at a share of the league title for the first time since 2009. 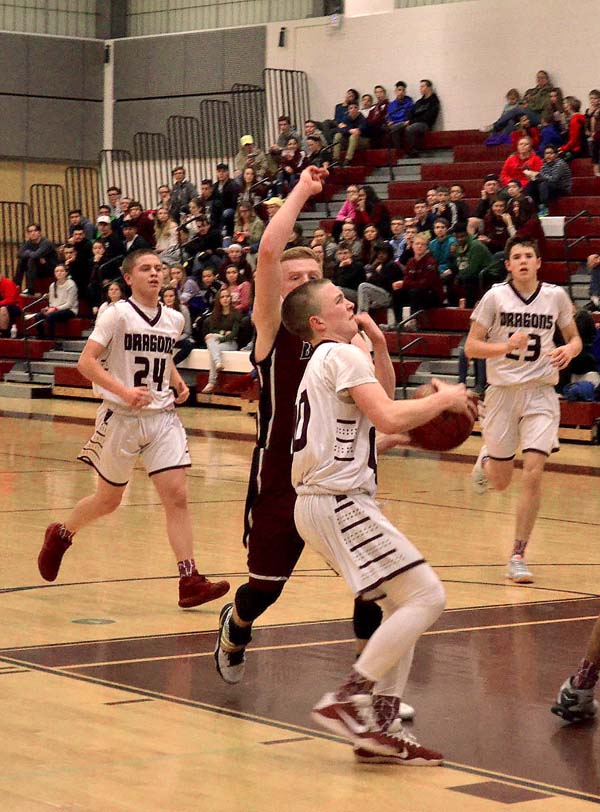 Gloversville's Dante Bouchard looks shoot during a Feb. 22, 2017, Section II Class A first-round game at Gloversville High School on Feb. 22, 2017, as Anderson Jones (24) and Joey Rowback (23) look on. The trio have helped lead the Dragons to a 17-1 overall record this season. (The Leader-Herald/James A. Ellis)

“We are excited for that and have always wanted to win championships since an early age,” Jones said.

Jones, Bouchard and Rowback have been playing basketball together on various teams since the fourth grade and have come up through the program with many of the players on the Dragons.

But even playing together for a while they found the adjustment to playing at the varsity level to be a different beast.

“The key was for us just to get a feel for it,” Bouchard said. “It was the first year to get a start to a change in the program. Every team has that knock, the beat up year, where you learn. Then the young guys come through and the off season really fuels you.”

Rowback agreed, adding, “We also started to get the feel for varsity competition and that took a while for us to figure that out in our freshman year.”

Now juniors, the trio point to one game that has fueled them since the end of their freshman season; a season-ending 72-58 loss in the opening round of the 2016-17 Class A Sectionals to Burnt Hills-Ballston Lake on their home court.

“After we lost here to Burnt Hills in our freshman year, coach Kucel was pretty upset,” Bouchard said. “It was at that moment that everybody knew it was the time to get better. We promised him we would be in the Civic Center [Cool Insuring Arena in Glens Falls] next year. We thought about that promise every day in the offseason and during the season.”

The Dragons delivered on their promise to the coach with a 15-7 overall record and a trip to the Class A semifinals at the Civic Center before falling 77-65 to Amsterdam in the semifinals. Along the path to the Civic Center, the Dragons also delivered Glens Falls one of its two regular season losses.

“What was great about last year was that our two seniors [Buck Galster and Esean Brown] understood their role and it was these three. In basketball the little things are big things. The guys around them buying into it and being superstars in their roles. We have a bunch of guys who have done that and that has been a key ingredient. Knowing your role, understanding your role, accepting your role and then being a superstar in your role.”

The hard work has started to pay dividends for the Dragons as they have run off a 14-game win streak since an 89-78 loss to Glens Falls on Dec. 4. On that night, Bouchard reached the 1,000-point milestone of his career.

Rowback is quickly closing in on the milestone with 964 points heading into Monday’s game.

“We don’t really think about it. Everybody enjoys watching each other succeed. We are a team,” Bouchard said. “When I got to a thousand it was like OK, great, now we have a game to win. The night I got a thousand didn’t mean as much because we lost. It is always good to have individual milestones to hit but it is nothing like team milestones. Those are the best ones to get.”

While Rowback and Bouchard have hit the points, they both are quick to point to the other Dragons for their successes.

“A lot of times in the newspaper people see that Joey or I are scoring a lot of points but Anderson is under the radar and is the glue,” Bouchard said. “Another person who is under the radar is Kadyn [Ruggeri]. If we have a slow start when he comes in he definitely gives us a spark every time he comes in. He does so much defensively as well as offensively. He plays extremely hard.”

Jones has connected for 131 points this season but has also turned in performances with double-digit rebounding and assists.

“Getting the win,” Jones said is the most important stat to him. “Doing what ever it takes to get the win.”

“Jules is picking his spots of where to fit in,” Kucel said. “When he is at his best is when he is super aggressive, offensively and defensively. That is what he was against Johnstown. That was one of the best overall performances he has had. He can do it all.”

Kucel is quick to point out that every player on the team has strengths that he has been able to utilize to the best of their abilities when the situation calls for it.

“Joe and Dante are good for 50 a night, what a luxury that is for a coach,” he said. “Andre Stanfield is a kid who did not play as a freshman and barely as a JV. Last year he bailed us out of two games. At Amsterdam he hadn’t played in eight games and went in and made three or four huge plays. Then against Glens Falls Buck Galster got in foul trouble and he played almost the whole game. We have a lot of trust in him and he is a kid who knows his role and gets these guys open.

“Kadyn [Ruggeri] has been awesome. He is our energizer off the bench. He is fiesty and we love to have him on our team. Jared Warner comes in and does a lot of the dirty work guarding some of the big guys. I am really excited for his development. Get [Sam Getman] is a middle linebacker in football and he kind of does that for us on the basketball court. He is undersize but he is physical and has a lot of fight to him.”

Kucel admitted he would not like to be on the other side of the court facing the Dragons.

“It is funny, that comes up all the time in practice,” he said. “I have told them if I am coaching against you guys I would have no idea what to do.”

However, the team member that brings a smile to their faces when they talk about key elements in the Dragons success is team manager Derrick “D-Rock” McGuinness.

“We love to have him around,” Kucel said. “He never has a bad day and brings a lot of energy to our team. He is a big piece of the Dragons team.”

Bouchard agreed, adding, “He is a professional mood-lifter, too, whenever there is a time when we are not doing something good. One night we lost and were upset, coach was giving a talk and his phone went off playing some crazy music. Everybody just cracked up and relaxed.”

Now the Dragons, ranked No. 22 in the Class A state rankings, are preparing to square off against Syracuse-bound Joe Girard III and the once-beaten Glens Falls Indians, ranked No. four in Class B. Girard has scored 4,174 points so far in his five-year varsity career and is coming off a Section II single-game record breaking performance with 69 points in the Indians’ 98-83 victory over Schuylerville on Friday.

Girard also has connected for 110 3-pointers in his 868 points this season and is 218-for-256 from the free-throw line. Trenton Girard can also hit from behind the 3-point arc and has 41 3s.

Gloversville have connected for 162 3-pointers as a team this season with Bouchard hitting 79, Rowback 32, Deumaga 27, Jones 17, Ruggeri six and Getman one.

“It [Monday’s game] was in the back of our minds but we were focused on Broadalbin-Perth first [64-45 victory Friday],” Rowback said. “Monday is exciting just to think about it. For them it is win you are Foothills champions, lose and your are co-champions. For us it is everything on the line.”

Bouchard said he is also excited to be able to play before a sold-out crowd at Gloversville High School.

“Our freshman year we came in here and those bleachers were pretty empty and we didn’t have a Super Fans Section [Gloversville students] for one game that year,” he said. “Last year it was about bringing the fans back and this year it is about keeping them. We have had the Super Fans here and even some Super Fans at the away games.”

Doors are slated to open for Monday’s game at 6 p.m. with the game tipping off at 7 p.m. Presale tickets only were available for the game and were sold out and no tickets will be available at the door.

The game will be broadcast live on the radio by WENT (1340 AM, 105.1 FM) as well as streamed live over the internet on www.capitalregionsportsnet.com.

“We have felt this coming for the past few years but especially this summer when we were practicing in Boulevard gym when it was 100 degrees out,” Kucel said. “We were practicing and playing to get ready for the season. This is going to be a big moment.”