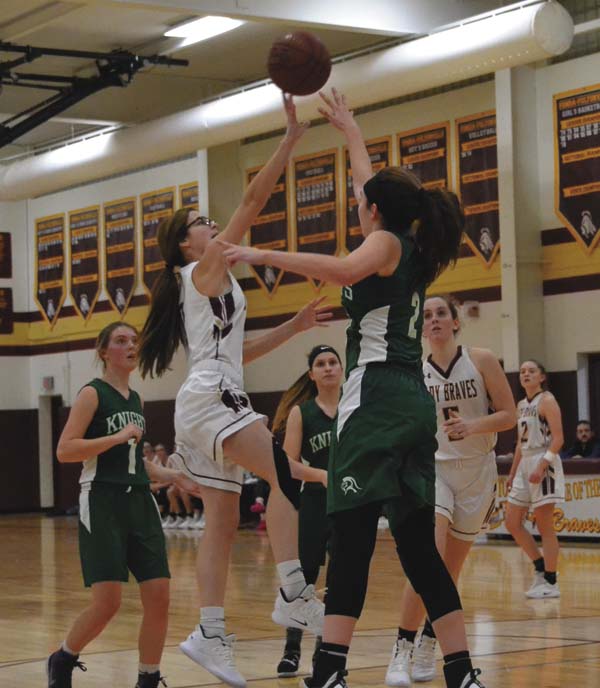 FONDA — The Fonda-Fultonville Lady Braves jumped out to an early lead against the Knights of Middleburgh Wednesday night and, although the Knights would close the gap, the Lady Braves would never relinquish that lead as they cruised to a 69-52 victory in a Western Athletic Conference girls basketball matchup.

“This is one that we were worried about,” Fonda-Fultonville head coach Flip Boshart said. “We knew that they were better than what some of their scores have indicated. They gave us a run the whole way through. It was never a comfortable game.”

Jillian Wilder, Marilyn Whitcavitch and Carly Atty combined to go on a 9-0 run for the Lady Braves to start the game. Middleburgh got on the board at the 4:42 mark when Megan Brown scored for the Knights.

Middleburgh managed to close the gap in the second period. Wilder started things off for Fonda-Fultonville with another free throw and Avery Cusack nailed a 3-pointer. Brown made a basket and three foul shots to give the Knights a little momentum. Whitcavitch made a free throw but Kelsey Terrell scored to inch Middleburgh closer with the score 21-19 with 4:14 remaining in the half. Cusack’s jumper from the baseline was answered by a bucket from Hallie Gasner. A basket by Whitcavitch and a free throw by Lyndsay Lombardoni opened the gap for the Lady Braves but Kelsey Terrell and Gasner each made baskets to draw the Knights to within one. However, that was as close as they would get as Lyndsay Lombardoni banked in a shot and Kyla Smith made a pair of foul shots to make the score 30-25 at the half. 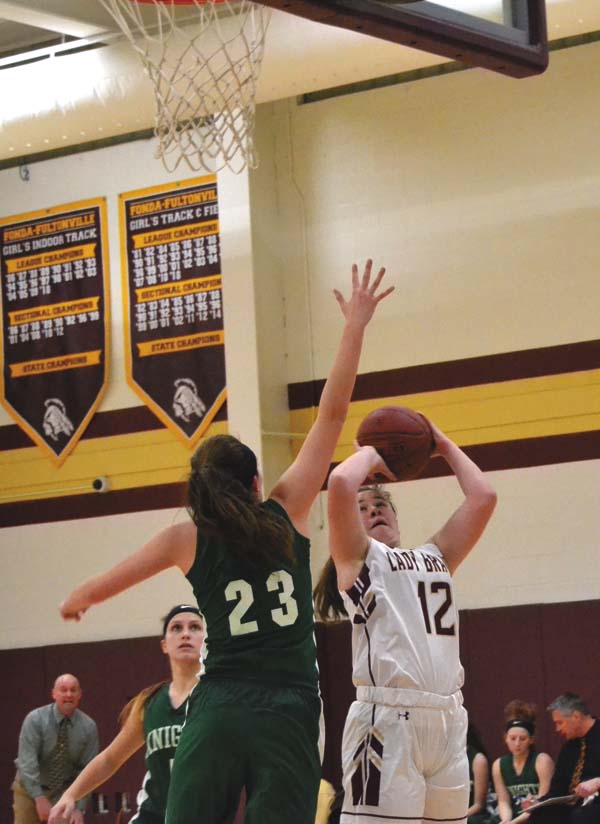 In the second half, the Fonda-Fultonville offense found its rhythm and the defense stiffened as they began to pull away from the Knights. Wilder managed to get free down low to score the first six Lady Braves points while Palmatier, Kelsey Terrell and Makenzie Terrell combined for eight points for Middleburgh making the score 36-33 at the 5:35 mark. Abby Lombardoni began to take charge of the game. After putting back a rebound for a basket, she quickly stole the ball and took it in for a lay-up and then followed that with a 3-pointer to give the Lady Braves a 10-point lead. Whitcavitch added another free throw and Abby Lombardoni took another steal in for a lay-up. Brown stopped the run for Middleburgh with a basket and then hit a 3-point shot but a basket from Cusack gave the Lady Braves a 48-38 lead going into the fourth quarter.

The Lady Braves dominated the final period as they outscored Middleburgh 21-14. Abby Lombardoni scored six straight points for Fonda-Fultonville while Kelsey Terrell scored five with Brown and Palmatier each adding a free throw to make the score 54 – 45. Then Atty, Alyssa Duval, Abby Lombardoni and Wilder joined forces to go on a 13-0 run for Fonda-Fultonville. Kelsey Terrell made a pair of foul shots and Brown added a bucket for the Knights. Wilder scored a bucket to close out the scoring for the Lady Braves and the game ended with a buzzer beating 3-pointer from half court by Kelsey Terrell to make the final score 69-52.

Abby Lombardoni led all scorers with 24 points for FFCS. She also had 11 rebounds and six steals. Wilder had 13 points for the Lady Braves, while Whitcavitch added 10 points and 13 rebounds.

Kelsey Terrell was the high scorer for the Knights with 18 points. 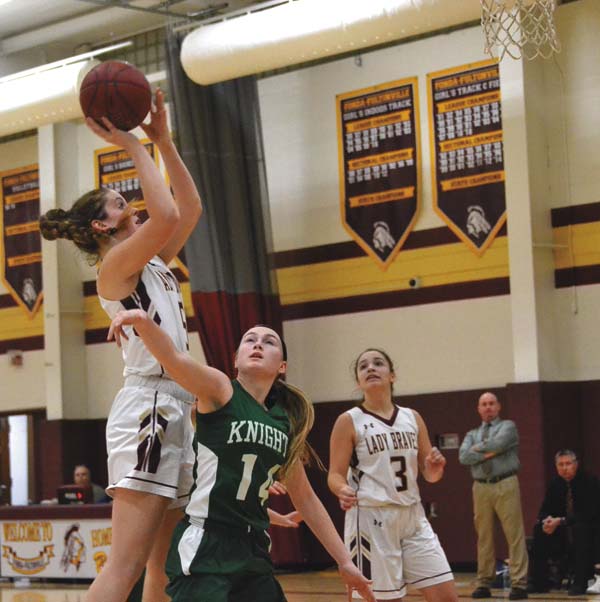 Fonda-Fultonville, (10-3 overall, 7-1 WAC) will travel to Schenectady on Friday night to take on Notre Dame-Bishop Gibbons, while Middleburgh will be on the road to play at Oppenheim-Ephratah/St. Johnsville. 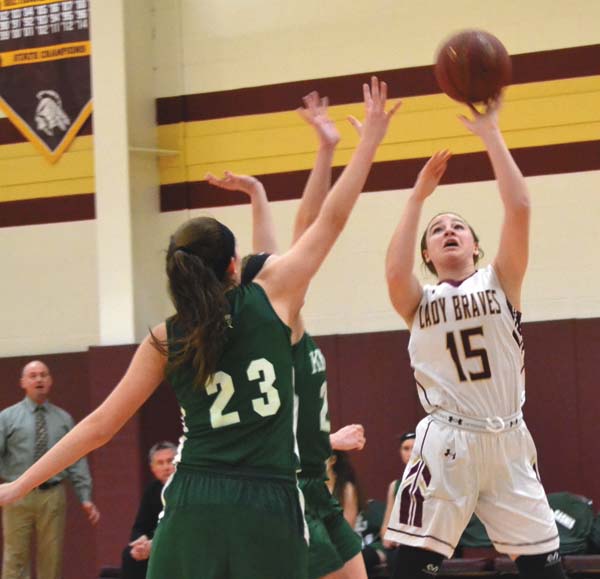 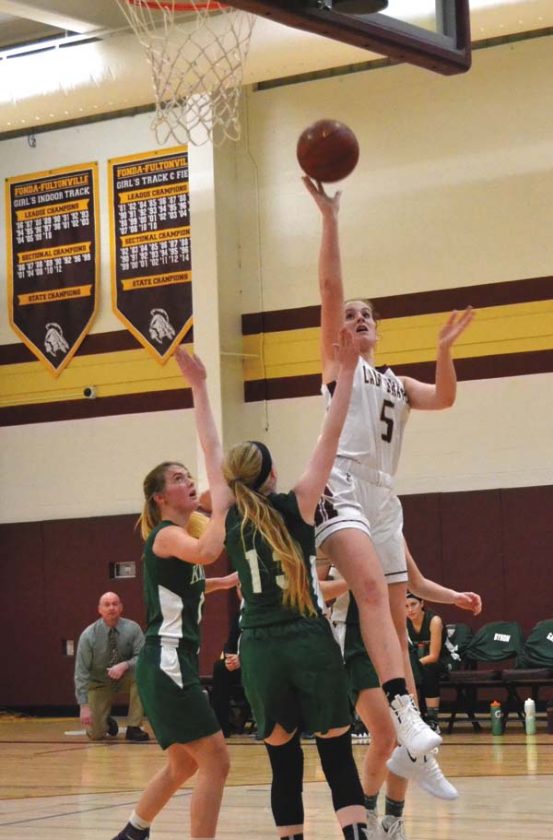